Home » Beauty and Fashion » A Dynamic Duo, on and Off the Stage

A Dynamic Duo, on and Off the Stage

It was through music, not movement, that Julie Benko and Jason Yeager first introduced themselves as a married couple to their 107 friends and family members. After their June 5 ceremony in New York’s Hudson Valley, the bride and groom performed “Always,” a song Ms. Benko wrote for Mr. Yeager in the first few months they were dating. They eventually made their way to the dance floor, once their band picked up the tune. But it was important, they said, to kick off the festivities with what first brought them together.

“I think really the foundation of our relationship was our friendship and our passion for music and making music together,” Mr. Yeager, a pianist and composer, said.

The couple have actually been a performance pair longer than they’ve been a romantic item. When they met, at a Starbucks in Manhattan in 2013, Ms. Benko, an actor and singer, was in need of a piano player to accompany her at a gig. She overheard Mr. Yeager, who earned a master’s degree in music from the Berklee Global Jazz Institute, interviewing with someone else by phone and decided, with characteristic aplomb, to approach him.

At the time, Ms. Benko was nursing a broken heart and wasn’t looking to date. Mr. Yeager felt differently. He quickly wrote a love song about their first encounter, “Smiled First,” for his 2014 album “Affirmation.” Luckily, this discrepancy didn’t stymie their creative connection. They met regularly during this period to play Broadway show tunes and selections from the Great American Songbook together as friends.

It took about a year of casual jam sessions for Ms. Benko, a graduate of N.Y.U.’s Master of Fine Arts acting program, to reconsider her position. Unfortunately, by that time Mr. Yeager, 34, was unavailable. 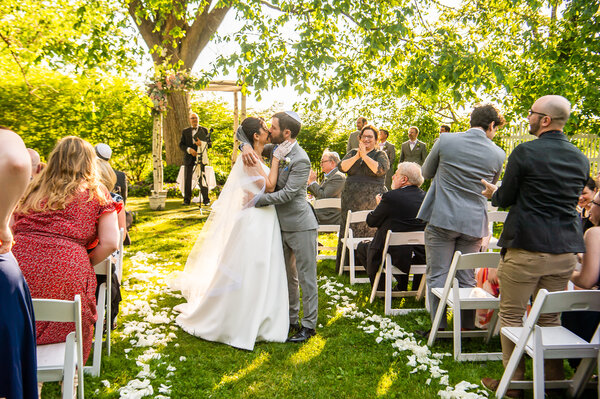 “I went to tell him, I went to one of his gigs with a friend,” said Ms. Benko, 32. “And I discovered at that gig that he had just started dating someone else.” A few weeks later, she mustered the courage to share her feelings anyway and soon after the two became a couple.

The increased intimacy, which multiplied exponentially again when they became engaged in 2018, only improved and expanded their ability to collaborate. Since embarking on their relationship, they’ve worked on several projects together. These included a cabaret show, “Blame It On Our Youth,” which toured in 2014 in New York, Connecticut and Massachusetts; Ms. Benko’s debut album; and a pandemic concert series.

Their virtues as an artistic partnership mirror their strengths as a couple closely enough that their comments about one dimension often sound like metaphors for the other. “Julie’s melodies are so strong that they kind of tell me what they need already in terms of chords,” Mr. Yeager said of her songwriting, a pursuit she credits him with encouraging and influencing. “They’re there even though they’re not there yet — I just have to listen to her melodies.”

The ceremony, at FEAST at Round Hill in Washingtonville, N.Y., was officiated by Ms. Benko’s uncle, Rabbi Eric Polokoff. Afterward, in a nod to the city of New Orleans, the assembled group paraded around the venue’s property behind Gotham Kings, a jazz band led by the trumpeter Alphonso Horne. “We loved the music from New Orleans, you know like Professor Longhair, Dr. John, and all this kind of second line brass band music,” Mr. Yeager said.

For the couple and their guests, experiencing music in person again was a great joy. “A lot of people were saying how healing it was to get to hear such amazing live music,” Ms. Benko said. “It was really cathartic.”