Home » Beauty and Fashion » A Final Celebration of Their Life Together

A Final Celebration of Their Life Together

Sarah Myler credits her relationship with Jeffrey Benesch to a pair of forces: opposites attract and love at first sight. “I am very much a liberal weirdo, and he’s a Southern conservative, but we fell in love the second we met,” she said. On April 2, after nine years together, the seconds stopped accruing long before either was ready.

Ms. Myler and Mr. Benesch celebrated their life together in a ceremony just days before in a courtyard at Duke University Hospital in Durham, N.C., where Mr. Benesch was being treated for advanced congestive heart failure. On March 25, doctors had determined his heart was too weak for a transplant and that he had only days or weeks to live. In 24 hours, with the hospital staff’s help, Ms. Myler put together a wedding that doubled as an intimate farewell gathering. He died at the hospital eight days later. He was 49.

Though the wedding took shape quickly, marriage was not a spur-of-the-moment decision for the couple, who met on social media in March 2012. “We were friends of friends of friends on Facebook,” she said. Mr. Benesch was a site superintendent for a construction company then living in Mebane, N.C. Ms. Myler, 46, lived in Martinsville, Va., and was working as a visual manager for the department store Belk.

“I happened to be going to North Carolina to visit some old friends I grew up with in New York, and he said, ‘Why don’t you meet me for coffee?’” she said. “When I met him, it was just this instant physical thing. Fireworks.”

Mr. Benesch, she said, was lit from within. “There was this generosity to him,” she said. “He was a volunteer firefighter every place he lived since he was 16. There was nothing he wouldn’t do for you.” That included giving up his home six months after they met to move in with Ms. Myler in Martinsville, 90 minutes away.

“We had become inseparable,” she said, “but he knew I wanted to stay close to my family. He said, ‘Hey, why don’t I move up to where you are, so you can stay near your sister and your niece?’”

Ms. Myler’s mother died when she was 16. Her sister, Elizabeth A. Moore, Virginia’s state archaeologist, was 28 at the time. “Elizabeth raised me while she was going to college,” she said. With Dr. Moore’s daughter, Rebecca Moore, 26, the women became a unit of three. Mr. Benesch fit right in. “He loved my niece like she was his own daughter,” Ms. Myler said.

Mr. Benesch was married briefly in his 20s and divorced. Ms. Myler had never married. When he proposed in 2015 with his grandmother’s engagement ring, neither wanted to race down the aisle. “It didn’t feel urgent because we were older,” she said. “Plus, we wanted to buy a house and make sure things were a little more stable.” 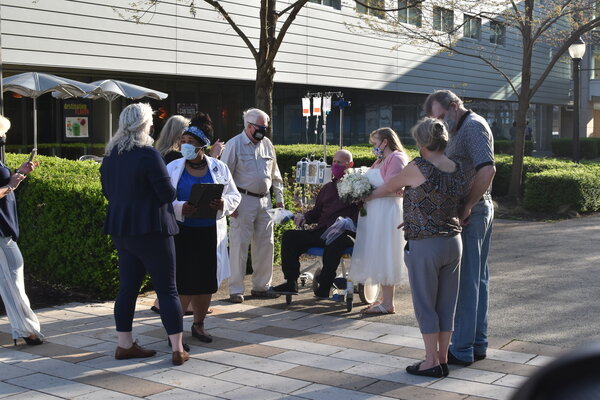 “Then we started talking more and more about getting married,” she said. “And then Covid hit.”

In the fall of 2020, they settled on a wedding just across the Covid finish line, the date to be determined, when Mr. Benesch’s health began deteriorating further. At the start of his hospital stay in December, they regrouped and set their sights on a fall 2021 wedding.

“We said, ‘By then you’ll have had a heart transplant and everybody will be vaccinated and we’ll all be safer and healthier,’” she said.

But Mr. Benesch would only be allowed home from the hospital for 10 days, in February, before a blood clot in his lungs required him to return. By the middle of March, Mr. Benesch was in the hospital’s palliative care unit. Ms. Myler had been commuting to the hospital two hours every day. Earlier in the month, she resigned from her job as a CVS shift supervisor when her Family and Medical Leave Act benefits ran out.

When she found out her fiancé had little time remaining on March 25, the prospect of a wedding, even a hasty one, helped her face the next day.

“My niece and my sister jumped into action so fast,” she said. Hospital workers did, too. “One of Jeff’s favorite nurses helped us find a place to be married outside, and someone else arranged for a classical guitarist from the amazing art program they have at Duke to play for us.”

Her dress, borrowed from a colleague at CVS, was almost an afterthought. “She had said earlier in the year, ‘I have a wedding dress and I’m not going to be keeping it.’ I called her and said, ‘Can I borrow it?’”

Dr. Moore and Ms. Moore picked it up from the drugstore on the way to the wedding.

On the morning of March 26, while a Duke University Hospital chaplain, the Rev. Theresa Bayless, prepared to lead the small outdoor ceremony, Ms. Myler invited a handful of Mr. Benesch’s family members to the hospital courtyard. Eight of them arrived in time to watch the wedding from a social distance, and to see Mr. Benesch for the last time.

Because the couple could not get a marriage license in 24 hours, the ceremony was not a legal one. “They would have loved to have had the license to make it legal, but declaring their love for each other with family present was special enough,” Dr. Moore said. “Having people there to recognize their love was a gift.”

Ms. Bayless wrote vows for the couple. “In front of your friends and family gathered here, do you promise to love each other, to share hopes, thoughts and dreams together?” she asked. After both said “I do,” Ms. Myler bent down to kiss Mr. Benesch in his wheelchair.

“I’m so happy we were able to do this,” he said through Ms. Myler in a telephone interview the day after the wedding. “I wish we had done it sooner.”

As Mr. Benesch died in the predawn hours of April 2, Ms. Myler was in his hospital room, holding his hand.

Later that day, she was reminded of his generosity. “He was an organ donor,” she said. “His organs are going to help others.”