Home » Beauty and Fashion » A High School Reunion for Two

A High School Reunion for Two

After a long absence from the dating scene, Courtneye Barrett made her presence felt three years ago on Bumble, when she parked her cursor on the profile, “John C., 53’s,” which belonged to John Capshaw, a bearded, blue-eyed man.

The first sentence in Mr. Capshaw’s profile put a smile on the face of Ms. Barrett, 55, who works in Houston as a network communications consultant for Shell Commercial Fuels and Lubricants, Americas.

“I’m looking for a woman with brains, sass and class,” wrote Mr. Capshaw, 56, the director of employee benefits in Houston for Service Corporation International, a provider of funeral goods and services.

Ms. Barrett, twice married and twice divorced at that time, took a deep breath, and swiped right into Mr. Capshaw’s universe with the kind of bold answer that perked his interested. “I can bring the sass,” she wrote.

“He looked so handsome in his profile photo,” she said. “He seemed like the type of guy I would enjoy meeting.”

But that already happened — nearly 40 years ago, in 1979, when Ms. Barrett first met Mr. Capshaw as freshmen at Spring High School in Spring, Texas. They also went to the same college, the University of Texas at Austin.

Ms. Barrett didn’t remember Mr. Capshaw, she said, because she didn’t recognize him in the photo.

Mr. Capshaw did not have that same problem. “I recognized her immediately,” he said.

So he decided to have a little bit of fun. “Bring the sass,” he wrote back. “That doesn’t sound like the demure girl I remember from high school.”

Ms. Barrett, stunned, began asking for more details, so Mr. Capshaw sent her a Facebook request and she remembered him instantly.

They immediately began to reminisce. Mr. Capshaw reminded Ms. Barrett that she was “the quiet type who was always serious about her studies.”

Ms. Barrett told Mr. Capshaw that she remembered him “as being outgoing and part of the cool crowd.” 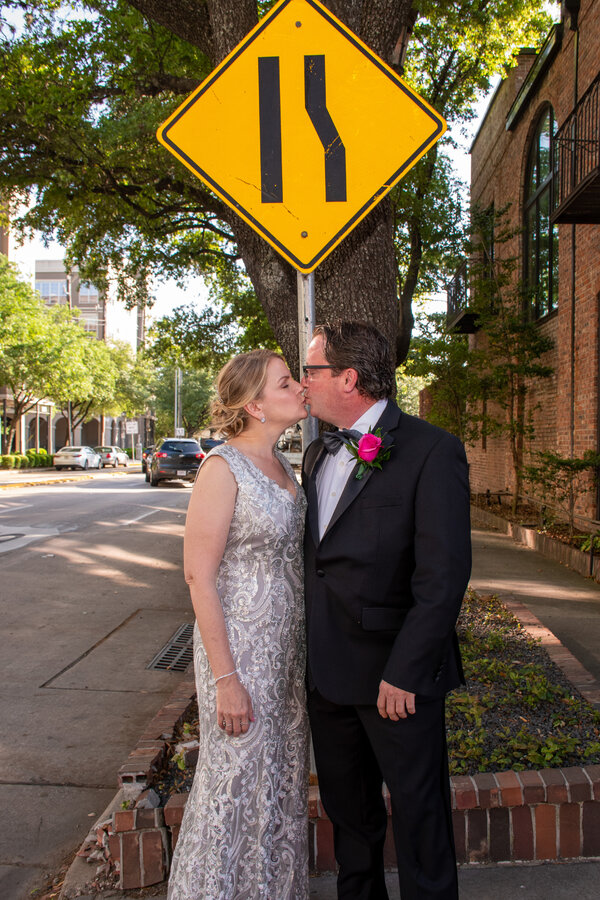 They also recalled being in the marching band and having tons of mutual friends. Mr. Capshaw shared that he wanted to date Ms. Barrett back then, yet their relationship never rose above platonic.

Ms. Barrett took the blame for that. “I always sensed an openness from John, and I always felt a bit of a pull to continue, but I was scared,” she said. “So, we couldn’t have recognized a spark if there was one.”

Ms. Barrett and Mr. Capshaw kept in touch after college, but had not seen each other since crossing paths at a party thrown by mutual friends in 1993. There was much catching up to do, and that began on a first date at a soul food restaurant in Houston.

Mr. Capshaw told Ms. Barrett that he was divorced with three children, and that at the time he and Ms. Barrett reconnected in August 2018, he was on four dating apps.

He had one other update: “I told Courtneye that I was a recovering alcoholic,” he said. “I checked into rehab for alcohol and depression in January 2018, and checked out at the end of March.”

Mr. Capshaw worried that his situation might be a deal breaker for a potential relationship, and she worried much the same that her previous marriages would taint his view of her.

But neither had to worry.

“We both know and accept ourselves and our separate histories,” Ms. Barrett said. “And those elements made for a great foundation on which to build our relationship.”

Nearly four decades after a missed opportunity to date Mr. Capshaw, Ms. Barrett said that she was “confident, after a lot of hard work and experiential learning — basically, growing up.”

“So I didn’t break the circuit, I stayed open to him, and the conversation flowed naturally and comfortably,” she added. “I was open to sparks with him, and they were there, and it was wonderful.”

They were married April 10 at Brennan’s of Houston. Brad Skattum, a friend of the couple who became a Universal Life minister for the event, officiated before 19 guests.

The couple had originally hoped to get married on Dec. 27, 2020, but the coronavirus forced them to change the date.

“Each day with him is fun,” the bride said of the groom. “I feel so lucky that our lives have led us to this point. And I know that our life together will not always be rosy, but I look forward to experiencing it and figuring it out, together.”