Troy Alim II didn’t mean to be rude when he interrupted a conversation Whitney Jean was having during a Chicago voter-registration drive in 2016. But when he overheard her asking why they weren’t reaching people in certain communities and how they might be able to fix it, he couldn’t resist.

“You could tell she wanted to dig deeper about how we could engage people,” said Mr. Alim, who was also registering new voters at Harold Washington Library Center that October. Ms. Jean was volunteering with the Black Youth Project; Mr. Alim was with Chicago Votes.

“I thought she was really smart,” he said, though his approach was a turnoff. “When Troy came over and inserted himself into my conversation, I was like, ‘Who is this guy?’” she said.

Mr. Alim, 30, is the Midwest engagement manager at Young Invincibles, a nonprofit public policy group representing the interests of 18- to 34-year-olds. Since dropping out of Morehouse College in Atlanta in 2011, he has been building an activist’s résumé. Mr. Alim said he started learning how to organize after the deaths of Rekia Boyd, a Black woman who was killed by a white Chicago police detective in 2012, and Laquan McDonald, a Black teenager who was killed by a white Chicago police officer in 2015. The detective was acquitted in Ms. Boyd’s death, but the officer was convicted of second-degree murder in the McDonald case.

If Ms. Jean’s initial impression of Mr. Alim was that he was a shameless eavesdropper, she changed her mind when the conversation turned to the peaceful protests he had taken part in after those killings. “We realized we had been organizing around some of the same people,” she said. “We had a lot of the same ideas and had been in a lot of the same rooms.” He asked to exchange phone numbers. “He was slick about it. He was like, ‘Let’s work on another thing. I have info about places you can do outreach.’”

When she ran into him at another voter registration drive days later at a community center on the South Side, she was happy to see him. But the meeting hadn’t been entirely a coincidence. “I had started thinking about places she might be likely to be tabling and started advocating to go there,” Mr. Alim said. 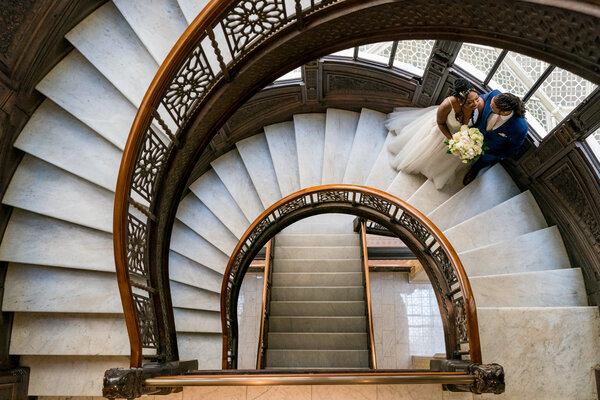 Ms. Jean, 25, was studying education at the University of Chicago at the time. She is now a fourth- and fifth-grade language arts and social studies teacher at the South Shore Fine Arts Academy. Her commitment to organizing, and to earning her degree, was outweighing her interest in dating when she started sensing, after a few more coincidental meetings at voter registration drives that fall, that Mr. Alim was interested in her romantically.

But when he asked her to a whisky tasting in November, just after the presidential election, she said yes. She was nervous. He wasn’t, until he saw her arrive. “She looked amazing,” he said. By the end of the year, they were falling in love.

In April 2017, just before Ms. Jean was expected to graduate, Mr. Alim dropped a note on her desk while she was studying for her teaching credentials. “I went old-school,” he said. “It said, ‘Will you be my girlfriend?’” He included “yes, no and maybe” boxes — a nod to notes she had confiscated as a student teacher. She ticked “yes.”

The following year, they moved into an Uptown apartment together. She had already met his parents, Troy and Jeneen Alim, in their Chicago neighborhood; Mr. Alim had met Ms. Jean’s mother, Jeanette Albin, in her hometown Skokie. On Aug. 4, 2020, Ms. Jean’s birthday, Mr. Alim arranged a socially distanced brunch for 10 friends in the yard outside their apartment. After the group broke into the happy birthday song, Mr. Alim cued up Kendrick Lamar’s “Love.” He then got down on one knee and proposed. “I was speechless,” Ms. Jean said. “Everyone was like, ‘Girl, say something!’” When she did, it was yes.

Ms. Jean and Mr. Alim were married by Randall Dyer, executive pastor at Greater Grace Church, on June 19 — Juneteenth — at Row 24, an events space in Chicago. Half their 200 guests attended in person, the other half watched via Zoom.

“Juneteenth felt like a really fitting day to celebrate our love, given the way we met and our commitment to serving and fighting for liberation,” Ms. Jean said. “It’s also a day more Black folks are beginning to come together. We wanted to uplift that.”