In early March, Carla Kitzmiller, a title clerk at the Indiana car dealership Thomas Kia of Highland, went to work with a problem. She and her fiancé, John Porter, wanted to be married April 1, but because of Covid regulations, their options seemed limited to eloping at a courthouse near their home in Munster, Ind. “The girls I work with started talking, and they were like, ‘No! You can’t have family at the courthouse,’” Ms. Kitzmiller said.

Kara Kawanna, who works in billing at the dealership, was particularly opposed. “We knew Carla would want her mom to be there,” she said. Her mother, Katherine Kitzmiller, 93, has Addison’s disease and Parkinson’s disease.

A plan was hatched. If Ms. Kawanna and Ms. Kitzmiller could talk Tom Seely, the general manager of the dealership, into hosting a wedding on the showroom floor, Ms. Kawanna would get ordained online to officiate. At first Ms. Kitzmiller didn’t take the idea seriously.

“It started out seeming like a joke,” she said, “but the next thing you know everybody was talking about it like it was real.”

Ms. Kitzmiller, 49, met Mr. Porter, 70, in 2016 at the Blue Chip Casino and Hotel in Michigan City, Ind. Both had been previously married and divorced.

“He was playing table games and I was kind of just standing there,” she said. When he approached her to chat — “I liked her blue eyes,” he said — they fell into what would become a familiar pattern. “He started joking around,” she said. “We hit it off over that. We both love to laugh.”

She left the casino with his phone number and called him three weeks later. For a first date, they met at Teibel’s Family Restaurant in Schererville, Ind. By the end of the evening, romance was in the air.

Mr. Porter retired from his career as a project manager for Chicagoland Construction in March 2017. Before then, he was living in Woodstock, Ill. Six months into his relationship with Ms. Kitzmiller, they had enough of long-distance dating. He moved in with her in Munster, where they built a sturdy union on grudge avoidance and respect. 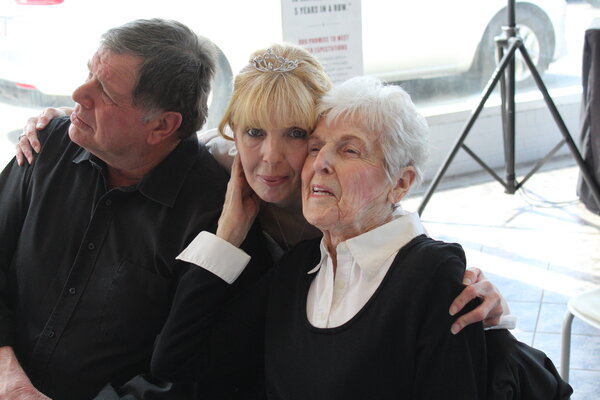 “We’ve had two spats the entire time we’ve known each other, and both times we were laughing two minutes later,” Ms. Kitzmiller said. Also important was his acceptance of her devotion to her mother, who lives nearby and requires frequent care.

Mr. Porter’s Jan. 1 proposal was a shock. “We had talked about it and decided that we would not get married,” Ms. Kitzmiller said. “But then all of a sudden I’m standing there and he’s on one knee, holding out a box.” The choice to marry on April Fools’ Day felt like an extension of their love of clowning around. “Plus it’s a date you’ll always remember.”

Getting married at an auto dealership would be memorable, too. When Ms. Kitzmiller approached Mr. Seely about potentially exchanging her vows with a fleet of gleaming Kias as a backdrop, he was happy to oblige.

Ms. Kitzmiller meant it. “I do consider my co-workers family. Most of us would do anything for each other,” she said. “It’s not a normal dealership.”

That was likely evident to shoppers who entered the showroom on April 1, when Ms. Kawanna, who had become a Universal Life minister, married the couple in a short ceremony under an altar made of pink and white balloons.

“We had maybe 20 customers come in while they were getting married and during the reception,” Mr. Seely said. That was in addition to 30 invited guests, most of whom stayed on to work afterward. “The whole dealership showed up, except for some of the mechanics who were busy,” Ms. Kawanna said.

Ms. Kitzmiller did not stay on after the DJ stopped spinning the Bee Gees and the potluck reception had been cleared.

“But I’ll be back to work on Monday,” she said the day after the wedding. And with gratitude.

“What they did for me and my family was beautiful. I’m so thankful.”