Black-owned watch brands are having an unprecedented year.

“June was our best month,” said Randy Williams, founder of Talley & Twine, a 6-year-old watch company based in Virginia that saw revenue more than triple between April and August, with sales rising to $830,000 from $250,500 during the same period in 2019.

Though the pandemic has caused havoc in some quarters of the industry, with Swiss exports down by almost a third, certain pockets are flourishing, said Zach Weiss, co-founder of the online retailer Windup Watch Shop. With brick-and-mortar stores shut in many areas, “it’s been a very good year for online sales,” he said. “We’ve seen a lot of traction in the under-$1,000 price point.”

The majority of Black-owned watch brands in the United States — online businesses selling fashion watches for less than $500 — fit squarely into this category. But their recent success transcends a singular rise in sales. Many say they also are experiencing an uptick in press coverage, collaboration requests and coveted spots in online retail stores.

Most say they have no doubt that, in the wake of social justice demonstrations across the country, the #BuyBlack movement has played a part. Searches for Black-owned businesses skyrocketed this summer, according to a spokesperson from the search engine Yelp.

But reasons for the recent success are nuanced. Most of the Black-owned watch brands have built a strong online presence, and all the owners stress that their sales already were on an upward trajectory — which many attribute to their ability to speak directly to customers through social media.

“People want to see brands that have faces, and not faceless brands these days,” said Marcel Benson, founder and chief executive of the Benson Watch Company of Lanham, Md. He said his initial marketing approach was “polished,” an effort to match those of some big brands, but these days he keeps things simple: “It’s really just me telling my story,” he said. “I think it resonates with a lot of people.”

Here are five of those stories.

Mr. Williams, 38, said he began sketching watch designs on an impulse. “I couldn’t find what I was looking for,” he said in a video interview from his office in Portsmouth, Va.

The result was the Worley watch: a quartz chronograph, stripped of numbers save for an oversized seven, with second and minute sub-dials and an independent sweeping second hand.

Mr. Williams debuted the Worley on Kickstarter in 2014, six to eight months after its initial conception. Within a month it had exceeded its crowdfunding target, and today the model is the basis of three collections of men’s 46-millimeter and women’s 41-millimeter watches. They are available in a variety of colors with the choice of a leather, canvas or metal strap, priced at $125 to $235. 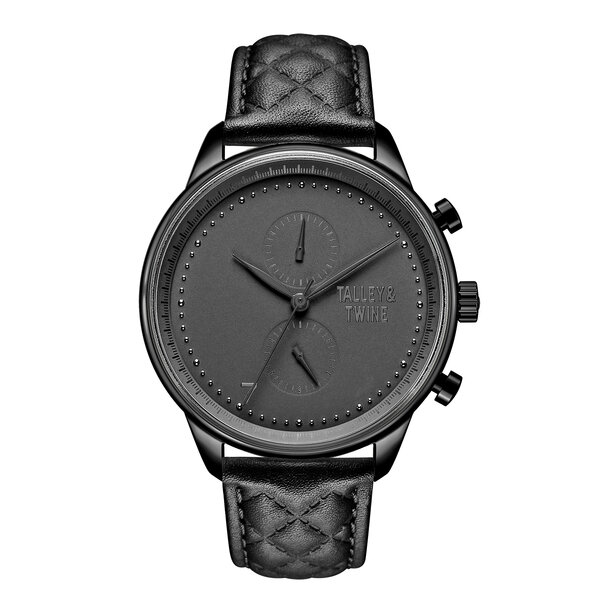 The company has grown to include two full- and six part-time employees. But, Mr. Williams said, his path to entrepreneurial success wasn’t an obvious one. Raised by his grandmother in Camilla, Ga., where most everyone went to work in the local chicken factory, Mr. Williams said he felt “stifled.”

“Coming from a small town, and being a young Black kid,” he said, “people really don’t expect a lot out of you.”

His transition from small-town boy to businessman was the inspiration for the company’s title. Talley & Twine was the name of an intersection in Portsmouth’s once-notorious Ida Barbour housing project, which was razed in the late 1990s and rebuilt to provide attractive, affordable homes for the residents.

“To me, that’s inspiring,” he said. It shows “you don’t have to finish the way that you started.”

It had taken two years for the watch enthusiasts Andrew Mutale and Benjamin Iroala to perfect the six Miyota quartz watches that they debuted on Indiegogo in January 2019.

During the watches’ development, they visited factories in Japan and collected samples from manufacturers elsewhere in Asia, Mr. Mutale, 25, said in a recent video interview from Chicago, where the company is based. He and Mr. Iroala, now 23, were intent on assembling the high-quality patchwork of Japanese and Chinese components used in Asorock Watches’ first three collections (They plan to release a new one in December).

“Some manufacturers will be good at one thing, but then won’t be good at another,” Mr. Mutale said.

The watches — the Monolith, the SpeedRacer and the FirstLady — range from 38 millimeters to 45 millimeters, sell for $105 to $135, and feature an engraving of the Nigerian coat-of-arms on the case back.

Mr. Mutale, born in Zambia, and Mr. Irola, born in Nigeria, arrived in the United States as teenagers. To them, the company’s goals are twofold: To represent Black African men in an industry where they are underrepresented and, as Mr. Mutale said, to “make an impact” on their home continent.

The brand, named for the granite outcropping that looms over the Nigerian capital of Abuja, donates 10 percent from the sale of each of watch to fund a library that the men want to build in Nigeria.

And in time, they hope to move their manufacturing from Japan to Africa. The aim: to create jobs and “empower people with knowledge and skills,” Mr. Mutale said.

In 2017, Mr. Benson resigned from his job as a financial consultant to pursue his passion for watches. The move, he said, was made in the spirit of the company’s motto, “Time Should Be Spent Doing What You Love.”

To date, it has released two lines of watches, both designed by Mr. Benson. Introduced on Kickstarter in 2015, the initial design was the Cardinal, a Swiss quartz timepiece inspired by a midcentury dress watch (that Mr. Benson declines to identify). The wristwatch, priced from $150 to $175, is available in six colorways on the brand’s website and soon will be on Gilt’s online shopping platform.

The second was a limited-edition line of chronographs called the Phoenix. With all of its 100 models now sold, Mr. Benson, 31, plans to reissue the watch in the spring and said he will donate a portion of the sales to help young entrepreneurs.

Over the next few months Mr. Benson hopes to raise enough capital to “really scale the company,” he said. “Capital has been, and probably will continue to be, the biggest hurdle.”

Mr. Benson’s future plans: to move his manufacturing from Asia to an in-house operation. “It’s a long-term goal,” he said, but, “we’re inching our way towards it.”

Introduced in 2013 by one-time fraternity brothers Kwame Molden and Maurice Davis, Springbreak Watches aims to “bring back the fun” of wearing a watch, said Mr. Molden on a video call from his home office in Charlotte, N. C.

The brand debuted with a series of 42-millimeter eco-friendly wooden watches made in a choice of zebra, sandal and maple wood, selling for $69.99 to $89.99. It has since released two more unisex lines: a series of classic 42-millimeter stainless steel mesh-band watches ($89.99) and the vivid Colorway Collection.

Available in a variety of eye-popping colors including neon green, the Colorway’s playful, quartz-powered wristwatches ($79.99) have, from a revenue perspective, “taken them all the way up,” said Mr. Molden, 34. (Mr. Davis, also 34, is a U.S. Army major and has an advisory role in the brand.)

So far the company has only one employee: Mr. Molden’s mother-in-law, Margaret Lewter, who packages and ships Springbreak’s China-made and assembled watches from her farm in North Carolina.

In contrast, the brand has garnered around 56,400 followers on Instagram. This community of customers and fans, Mr. Molden said, are Springbreak’s source for everything from photography and videography to models and artist collaborations. “We pay them and invest in them,” he said. Creating opportunities and giving people a platform, he added, is “part of who we are.”

In line with Mr. William’s goal to be “a one-stop shop” for the wrist, Springbreak has made a recent foray into bands for the Apple Watch and now offers a variety of $39.99 patterned canvas colorways. The bands, along with the company’s watches, will soon be available on Nordstrom’s online store.

An aquarium isn’t an obvious source of inspiration for a watch, but Eddie Johnson, 28, founder of Verdure Watches, looked no further than his living room fish tank when designing his latest collection, called Lure.

Sold in four colors and priced from $399.99 to $499.99, the 40-millimeter automatic timepiece features a gravel-patterned bezel and a guilloché dial reminiscent of fish scales, Mr. Johnson said in a video interview from his home office in Hackensack, N.J.

The watches were made and assembled in China from Mr. Johnson’s sketches, and feature the brand’s signature buckle-style lugs.

Mr. Johnson’s initial four-model Premier collection was released in 2015 following what he described as a discouraging three-year trial-and-error hunt for a manufacturer. It was financed in part by his father, an attorney who is an avid watch collector and whom Mr. Johnson credits for his love of watches.

He labeled the Swiss quartz-powered collection a “test run” and soon had moved on to his Sophomore line: four automatic watches featuring what he called an unorthodox half-skeleton dial, on which a portion of the balance wheel and gears can be seen moving.

“It’s beautiful,” Mr. Johnson said. “A lot of people don’t realize how many parts are in an automatic watch.”

Mr. Johnson’s ambitions include the release of a tourbillon and a moonphase timepiece. But now he has produced a series of sketches for the chronograph that he plans to release next year. “I have so many things I do want to get into in terms of watches,” he said.