Breaking Out of the Friend Group and Forming a Family

You might say that Rachel Schallom and Brent Lobdell met the old-fashioned way: Her best friend had a crush on his best friend, and so the two were introduced as a means of facilitating an entirely different romance. But when it came to the course of their own relationship, they broke with convention.

To begin with, they skipped the customary lead-up to a serious connection, after meeting at the University of Missouri in 2009 and spending the next seven years seeing each other on and off, almost always in a larger friend group.

“There wasn’t any initial relationship,” said Mr. Lobdell, now 34 and a sales manager in New York for Yelp. “We were young, we were in college, it was that sort of time frame. We would go on ‘sort-of’ dates.”

Ms. Schallom, now 32 and the digital editor in Manhattan for Fortune magazine (she received a master’s degree in journalism from Missouri in addition to her undergraduate degree), said that even without any definitions, they saw each other a lot.

“There was banter and definitely chemistry from day one,” she said. “We did a lot of things in groups, and it was sort of assumed that we would share something at dinner or sort of end up together at the end of the night. But we actually never really went on a first date.”

In 2016, Mr. Lobdell had a moment of clarity on the way back from yet another of those group events — a road trip to watch the Missouri football team play Louisiana State University — and he told Ms. Schallom that he was ready to drop everything and move to be with her. She was living and working in Miami at the time, and he was in his hometown, Kansas City, Mo.

“Maybe I needed to do a little growing up and realized that we were more mature and in a place where it was time to actually give it a shot, an all or nothing moment,” he said. “I said, ‘Let’s just do it. Let’s quit messing around.’” 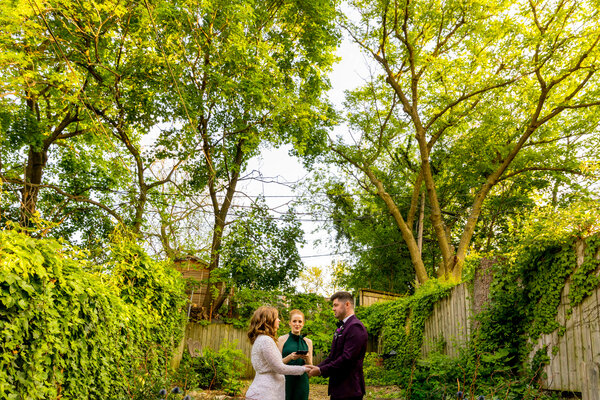 Ms. Schallom felt the same. “I think over the years, we realized that whenever there was good news or bad news or something funny that happened, we always wanted to tell the other person first,” she said.

In 2017, when she was hired at The Wall Street Journal, the two moved together to New York City and registered as domestic partners.

Just a year later, when she had to have gynecological surgery and her doctors told her that she would likely never be able to conceive the ordinary way, the couple decided to freeze embryos so that they would have the makings in hand for a family.

“In some ways, it was a blessing,” said Ms. Schallom, who will take her husband’s name. “It gave us a road map of what building a family was going to look like for us. It was unconventional, but it was just something that was dealt to us that we figured out how to deal with together.”

In keeping with their nontraditional timeline, the couple’s decision to marry came at the tail end of their other significant life decisions.

“I think we were just, ‘We are committed to one another, why not?’” Ms. Schallom said.

On May 15, the couple were wed in the backyard of friends in Brooklyn, with Jessica Witt, a friend who became a Universal Life minister for the event, officiating.

Mr. Lobdell said that while they are excited to be having a big wedding party for friends and family in 2022, they are formalizing their relationship in their own way and not simply because it is what is expected.

“When we were planning out our lives together, the commitment to have kids is the bigger commitment, honestly,” he said. “The wedding kind of comes after.”