Veterans, gamers, history buffs and gun enthusiasts are shelling out to take part in military simulations. 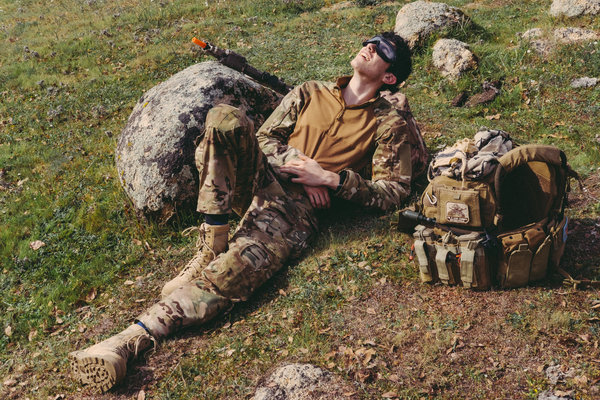 In February, a group of several hundred military enthusiasts gathered to play-fight in Clovis, Calif., at the foot of the Sierra Nevada.

They had come for an event called the Road to Kharkiv, a simulation of a fictional NATO mission into Eastern Ukraine, hosted by a company called MilSim West. Roughly half of the participants played NATO troops; the other half, Russian forces. Visually, they were almost indistinguishable from a real-life military unit.

Military simulation events aren’t new, though they have evolved over the past several decades. Early MilSim events were essentially re-enactments, focused on World War II-era battles with enthusiasts living “in character” for days at a time. In the ’90s, when first-person shooter games were growing in popularity, paintball and airsoft guns gained currency among MilSim players.

In the early 2000s, as companies began producing high-quality airsoft guns that mimicked the weight and internal mechanics of real weapons, the target demographic became people who sought to emulate American soldiers in Iraq and Afghanistan or, as Jet Del Castillo, a 36-year-old Navy veteran and MilSim enthusiast, put it, teenagers who wanted to “play Call of Duty in real life.”

Mr. Del Castillo said that the simulations also appeal to some veterans of the wars in Iraq and Afghanistan, many of whom were eager to leave service behind but still sought military camaraderie or the “thrill” of combat scenarios. Civilian players, in turn, were excited to hear firsthand about the war they’d seen depicted on TV and in video games.

Now, around 20 large-scale MilSim events (meaning those with more than 100 players) take place in the United States most years. Several others are hosted internationally. Though many were canceled this year because of the pandemic, some companies now have events scheduled for September and October.

MilSim West is widely considered to produce the most immersive scenarios: The uniform and gear requirements are extensive in order to be highly realistic, and the three-day events operate at a grueling pace that leaves no room for breaks. The company uses pyrotechnics and radios to mimic the sounds, smells and chaos of combat.

The Road to Kharkiv event drew 217 players, according to the company. Only 165 of them finished.

The Politics of Play-Fighting

While it’s impossible to convert an airsoft gun to a real firearm, the fake weapons are deceptively realistic — sometimes dangerously so.

According to The Washington Post’s database of fatal police shootings, 129 Americans were killed by law enforcement from 2015 to 2017 for holding fake firearms, most of them airsoft guns. The Cleveland police officer who shot and killed 12-year-old Tamir Rice in 2014 said he mistook the airsoft pistol tucked into the child’s waistband for a real one.

Still, in 2017, 3.4 million Americans played with airsoft guns; the following year, a report from Grand View Research, a consulting firm, estimated the airsoft industry — which includes gun sales, equipment and revenue from airsoft fields — to be worth $600 million.

MilSim enthusiasts don’t hew to any one ideology or political party. In the parking lot of the MilSim West event in February, a car with a Pete Buttigieg campaign sticker sat next to a truck with an National Rifle Association membership sticker.

Ryan Pendergrast, a 26-year-old Californian who manages a pet store and who was there for the weekend, described himself as a “staunch leftist.”

“You seem to come across people from all across the political spectrum at an event like this,” Mr. Pendergrast said, “which could be surprising for someone on the outside looking in.”

Still, there’s an understandable fear from outsiders that the combination of predominately young men and simulated combat means MilSim serves as an attractive recruitment source or training opportunity for far-right militias.

And while MilSim West’s owner and founder, Josh Warren, said that he deliberately avoids politicizing his events (in part, by creating an in-game world based on an impossible scenario), a few other MilSim organizations appear to have embraced the American militia movement, hosting events based on fictional battles between U.S. troops and civilian militias.

“If you think you’re here training for whatever coup your brand of politics is going to have in the streets, you’re going to be frustrated because people aren’t going to take it seriously,” Mr. Warren said in a phone interview in September. He added that “if I saw someone was recruiting people to carry weapons in the street, which is itself a form of violence, I would certainly tell the police.”

Ellie Chang, a 29-year-old historian who’s been an active MilSim West player for eight years, observed that the players are often impressionable young men. “These are the kids you can recruit into the military,” she said. “It’s the same person that could, key word here, could be recruited to the far right. It’s not MilSim that makes them go one way or the other.”

Mr. Warren pointed out that MilSim events cost as much as training opportunities offered by almost every gun range in America, which use real firearms instead of fake ones.

As far as hobbies go, MilSim can be expensive. Hyper-realistic airsoft guns can run upward of $800. Then there’s body armor, fatigues and helmets, not to mention the PVS-14 night-vision monocles issued to U.S. troops, which many players buy, that go for about $3,000 on Amazon.

Doug Woolbert, 46, who attended February’s event with his son, Benji, said he spent more than $2,000 on MilSim weapons and gear for the two of them. The $200 tickets were Benji’s 15th birthday present but for Mr. Woolbert, the bonding opportunity was priceless.

“For his birthday, we wanted to share time together and do something physical. I didn’t take the opportunity to serve when I had the chance and now I have another son who’s serving,” Mr. Woolbert said. (Mr. Woolbert’s other son is a U.S. Marine, stationed in Camp Pendleton, Calif.) “So many kids are playing video games, and I’m just proud my boys are doing this and getting me out here. I’m 46 and I’m not on the couch,” he said.

Most players justify the expense of the hobby as one of entry to a close-knit community.

“I’m terrible at airsoft,” said Harrison Irvine, 24 and from Halifax, Nova Scotia. “I come here to be with my friends, I come here to have a physical challenge, to get away from my desk job that I work back at home.”

The immersive quality is also a big draw. “You have these moments of suspended disbelief when things are going off around you, but then it calms down and you think, ‘Oh, I have to be back at work on Monday,’” said Devin Moore, a 28-year-old warehouse manager from Lake Forest, Calif.

The Road to Kharkiv event was, in the words of one participant, “more Dungeons and Dragons” than war game. But participants still learn about fighting from it. A National Guard helicopter gunship pilot named Frank said that the weekend helped him get a better sense of things from the infantry perspective.

Despite being pitted against one another for almost 40 hours, when the weekend’s final battle ended (the Russian side overwhelming the NATO team), the dirt-covered players broke into laughter and immediately began swapping stories and fawning over each other’s gear. Most of the players had slept for fewer than six hours in the past three days. All were grinning widely.

Later that day, at a nearby In-N-Out, Benji and his father recalled the battles. Mr. Woolbert said the event made him feel closer to his older son, the Marine. Benji agreed. Between bites of a double-double animal-style burger, he said, “I’ve seen that it’s a lot harder than I thought.”

The Look is a column that examines identity through a visual-first lens. This year, the column is focused on the relationship between American culture and politics in the run-up to the 2020 presidential election, produced by Eve Lyons and Tanner Curtis.

Related News:
TV and Movies
Gina Kirschenheiter is serious about boyfriend Travis Mullen — Here's when the RHOC star plans to get married
Mike Johnson dishes his thoughts on Clare Crawley and Dale Moss' romance
New Movies to Watch This Week: Halloween Offerings ‘The Craft: Legacy,’ ‘Come Play,’ ‘Spell’
Love Island star Maura Higgins' mystery new man revealed as hunky Merlin actor Bradley James
Coronation Street viewers slam ‘disappointing’ Johnny Connor and Scott showdown ‘Unreal!’
Recent Posts
This website uses cookies to improve your user experience and to provide you with advertisements that are relevant to your interests. By continuing to browse the site you are agreeing to our use of cookies.Ok