After the pandemic left fitness studios and gyms around the country shuttered or operating at reduced capacity, Margaux Drake let her regular yoga practice go.

It wasn’t a lack of interest in classes offered on Instagram or Zoom. Ms. Drake, an entrepreneur in Grand Rapids, Mich., did plenty of high-intensity interval training classes online. But for her, yoga isn’t merely about stretching, twisting, strengthening and balancing on her head. It’s about doing all of those things in a room heated to 90 degrees or hotter.

“The experience of doing yoga in a hot room is powerful in a way that I’m not sure if people who haven’t tried it can completely grasp,” Ms. Drake said.

So last fall, in one of the more creative fitness hacks of quarantine, she became a bathroom yogi.

Three times a week, Ms. Drake wakes up, plugs a space heater into a bathroom outlet and turns the shower on full tilt for about 10 minutes. She then goes to the kitchen for a cup of coffee, shutting the bathroom door behind her to trap in the heat.

About an hour later, she returns to the bathroom dressed in leggings and a stretchy top. She lights a few candles, drizzles essential oils near the heater, unfurls her mat and pulls up an online yoga class.

“It’s not like the studio, but it’s as close as you can get,” she said. “I am just dripping by the end.”

Ms. Drake is one of many Americans devoted to hot yoga. They believe it makes the physical practice tougher and allows for deeper stretching.

Some are also enticed by the purging sweat that can result from doing a movement class in a room heated anywhere between 80 and 105 degrees Fahrenheit.

“Without the heat we don’t get the same sense of release, that cathartic moment that doesn’t exist with the heat element,” said Candace Sneed, an attorney and yoga teacher in Atlanta. She lives with her aging parents and her college-age daughter, and worries that going to a class in her city, where many studios are open, poses contagion risks.

Ms. Sneed has set up a yoga room in her basement, using a space heater to get her body and mind into the meditative state. “The heating bill is through the roof,” she said.

Diana West of Draper, Utah, is another heat-seeker whose initial exposure to the discipline nearly 20 years ago was in a hot yoga studio. “Right up there with having a baby without medication, the first hot class was up there as one of the hardest things I’ve ever done,” Ms. West said. “But instantly I was hooked and addicted.”

To recreate hot studio conditions, Ms. West lets the shower run to steam up her bathroom, fills her bathtub in order to bring a little humidity to the situation, plugs in a space heater (“Carefully!” she said. “That could end very badly.”) and rolls a towel under the door to keep the heat in. Then she takes an online class.

Her ability to create a new microclimate in the Utah desert has surprised her loved ones. “The first time I did it, my husband walked in and said, ‘It feels like Costa Rica in here,’” she said.

Ms. West only lets herself indulge in at-home hot yoga on occasion (three times since last March) because she worries about the waste of resources. “It is a lot of water,” she said, though she has conserved in other ways. “I haven’t showered in the last year nearly as much as I used to, so hopefully it balances out.”

In cities where some apartment bathrooms may not be big enough to fit a mat, yogis are still finding ways to break a sweat. Studio owners in New York, for instance, are getting creative with the city’s outdoor spaces to offer masked yoga sessions that allow for airflow and social distancing.

Britton Schey and her husband, Wade Helliwell, own Verayoga, a hot yoga studio with locations in TriBeCa and Brooklyn. On the roof of the TriBeCa location, Mr. Helliwell has built a tented outdoor studio, with nine individual platforms and an infrared heater above each space. The plan is to open when temperatures approach 50 degrees.

“We have people reaching out to us every single day asking when the roof will open for hot yoga,” Ms. Schey said, “and we are like, ‘Guys, it’s 25 degrees out.’” 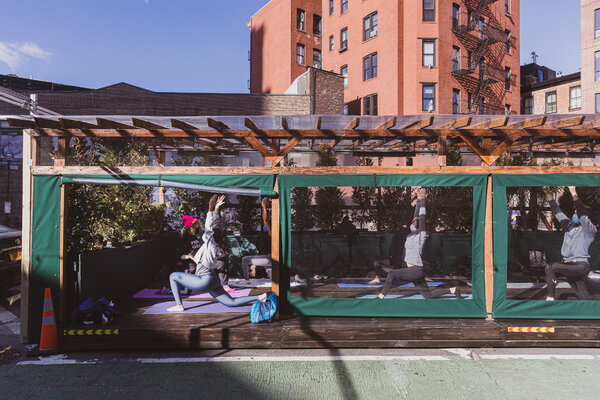 Tricia Donegan is an owner of Fierce Grace, a hot studio on the Lower East Side of Manhattan that has been around since 2004. (Until 2017 the studio was known as Bikram Yoga Lower East Side.) To comply with the city’s mandates, the studio is offering private instruction as well as smaller group sessions in which 14 students at a time (as opposed to the usual 60) do their own practice in the hot room with eight feet between each mat.

But Ms. Donegan’s yoga ethos has always been about making the practice accessible to all (including to Lady Gaga, whom Ms. Donegan first taught yoga when she was still known as Stefani Germanotta). She has been offering weekend outdoor hot classes even when the temperature is below freezing.

“I want to bring this tool to everyone during a time when people really need healing,” Ms. Donegan said. “The heat is a part of it.”

Last month, 20 yogis gathered outside Baby Brasa, a Peruvian eatery in Greenwich Village. Like other city restaurants, Baby Brasa constructed a patio on the street (in this case, Seventh Avenue) with pretty greenery and heaters hanging from the roof to accommodate outdoor dining. But before brunch, the patio became a temporary hot yoga studio.

For an hour, Ms. Donegan blasted the music and called out her poses through a mask. “I want nothing more than a sweaty yoga class and this is a pretty great alternative,” said Monty Stilson, 63, who attended the class.

Fiona Mason and Marios Mantzoukis were on mats a careful distance apart. At their apartment, they said, they take Fierce Grace classes online, but on weekends, they dress in layers and lay their mats under the restaurant’s lamps. “It’s outdoors in January and somehow you still can really feel the heat,” Mr. Mantzoukis said.

The pandemic has been a boon for the couple behind the Hot Yoga Dome, an inflatable tent-like structure that looks like a bouncy house for adults to play inside of. Gillian Sky Walker, a self-proclaimed “hot yoga junkie” (and a “Star Wars” fan who changed her middle name to Sky), first saw the product as a way to help entrepreneurs open hot yoga studios as economically as possible.

In September 2018, Ms. Walker and her husband, Alex McDermott, whose business is based in Los Angeles, began to sell the dome, which could be warmed with space heaters, to yoga teachers and studio owners. It cost $4,995 (as opposed to the tens of thousands it can cost to build out a hot yoga studio, Ms. Walker said) and accommodates 12-15 mats.

In 2019, Ms. Walker thought it might be smart to offer an at-home version of the dome, not to replace studios but to give hot yoga addicts an alternative when life and family made it hard to get to class. The smaller versions of the Hot Yoga Dome first become available for purchase, ranging in price from $850 to $1,500, in November 2019.

You know what happened next.

“Never in a million years would I have imagined this,” she said. “We had steady growth, but then the pandemic hit and now we are in serious business. It has been crazy.”

Jenn Totman of Leavenworth, Wash., bought a Hot Yoga Dome in December. Ms. Totman, and her husband, Jim Totman, are avid skiers, snowboarders, mountain bikers and hikers, and rely on hot yoga to keep their muscles limber. The couple first tried to create hot yoga conditions by putting a bunch of space heaters in Mr. Totman’s home office. “The heat started messing with his computers,” she said.

Then they considered building a yurt outside their home that they could heat, but they learned it would be prohibitively expensive. They found out about the Hot Yoga Dome. “All our ski vacations got canceled so we said, ‘Merry Christmas to us,’” Ms. Totman said.

They have put the dome out on their deck and heat it with four space heaters. (Ms. Totman puts a glass of water in front of one of the heaters to create humidity.) They now use the dome about five times a week, for yoga, Pilates or to relax inside of, like a sauna. “We’re able to get it to 101 to 104 degrees even when it’s 35 degrees outside,” Ms. Totman said.

Leavenworth is a Bavarian-style town in the mountains, and its residents lean very hard into Christmas. As a result, the Totmans’ outdoor deck has many electric outlets for their prodigious holiday lights display. That makes their Hot Yoga Dome even easier to use.

Power sources are essential, I’ve learned, to keeping the Hot Yoga Dome hot. Ms. Walker agreed to lend me a dome for this article. (I covered the shipping costs and bought two of the $25 ceramic heaters she recommended.)

I watched her instructional YouTube video, which made setting up the dome really simple. The biggest issue I have faced in three weeks of testing the dome is figuring out how to keep the power strips I have plugged the heaters into from shutting off automatically, presumably overwhelmed by the fan that inflates the structure, during my yoga practice.

If I remember to inflate the dome and turn on the heaters on to the lowest heat for at least 30 minutes before practicing, and I wind some extension cords through the house, the circuits don’t short and the temperature in the dome (in my very cold house) gets to about 90 degrees. I wouldn’t mind practicing in an even hotter space, but it’s plenty warm to work up a good shvitz.