Home » Beauty and Fashion » How Many Lives Can a Fashion Brand Have?

How Many Lives Can a Fashion Brand Have?

A little more than a year ago, the beloved French fashion house Sonia Rykiel — founded in 1968 by a flame-haired feminist to empower women, passed on to her daughter in 2007 and sold to Hong Kong investors in 2012 — went into liquidation. At the time, it appeared to be a sad denouement for the once-revolutionary ready-to-wear brand.

But now the house of Rykiel is about to rise again, under new owners. Or is it? Fashion history is littered with tales of newfangled entrepreneurs who have swooped in to save old brands, only to leave them in tatters. Will Rykiel be one of them, or the exception that proves the rule?

“The Sonia Rykiel brand is not damaged, it still has strong values,” said Michael Dayan, who, along with his brother Eric, made a fortune in outlet e-tailing and bought Rykiel late last year. The Dayans have big plans for the brand. A revamped women’s wear line. A men's wear line. A perfume. Perhaps even a boutique hotel. 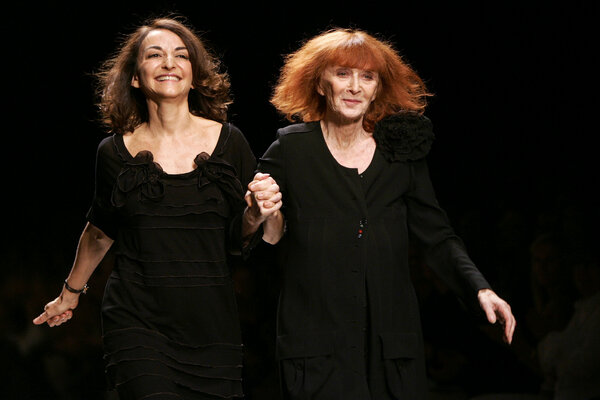 However, they have no experience in luxury fashion, and as Serge Carreira, a business lecturer at Sciences Po, put it, “luxury fashion is a very specific and demanding sector, and a challenging business,” even before the Covid-19 slump.

“There is a fascination and attraction to owning a luxury brand — it brings a lot of glam and fame, and it has been a booming industry and a very profitable industry,” Mr. Carreira continued. “But luxury takes time; it’s not a fast move. It’s a kind of game. And the return on investment is not guaranteed at all.”

What’s more, “Sonia Rykiel is a brand with a strong heritage, but a difficult one to bring back to center stage,” said Luca Solca, a luxury analyst at Bernstein. “It is possible that you hit great ideas and that you manage to get back to notoriety and desirability — but doing that in an industry dominated by mega-brands with way more resources for marketing and communication is very difficult.”

Case in point: the French modernist brand Courrèges. In 2011, a pair of French advertising executives, Jacques Bungert and Frédéric Torloting, bought the company from its founders, André and Coqueline Courrèges, and installed the hot design duo Sébastien Meyer and Arnaud Vaillant of Coperni Femme. Despite the splashy overhaul, sales faltered, and by 2018, all four were gone. (Courrèges is now owned by François Pinault’s holding company Artemis, the majority shareholder of Kering, and in the midst of another turnaround.)

Then there is the American fashion brand Bill Blass, which was purchased in 2008 by the entrepreneurial brothers Cin and Peter Kim, who made their money producing dress shirts and neckwear for the mass market. The Kims hired designer Chris Benz, formerly of J. Crew, to reposition the brand for Gen Xers, and, like the Dayans, focused on direct-to-consumer e-commerce. The new Bill Blass hit the market in 2015 to much fanfare, but it failed to lift off. Mr. Benz left the company, and today Bill Blass only sells shoes. There is currently nothing available on its website.

The Dayans brush all that off like a piece of lint. They say they are different. They say, as far as they are concerned, “Sonia Rykiel right now is like a start-up,” as Eric put it. And the Dayans know all about running start-ups.

The sons of Moroccan immigrants, Eric, age 40, and Michael, who is 38, grew up in the 12th arrondissement, a middle-class quarter on east side of Paris. Michael studied law, passed the bar and went into practice. Eric enrolled in business school, dropped out, and worked for the family’s destocking business. In the mid-aughts, Michael quit law and, with Eric, their brother David and their friend Thierry Petit, took the family business online.

The flash sale site they founded, showroomprive.com, “made money from the beginning, and grew every year,” Michael said. In 2010, they sold a 30 percent stake to the Palo Alto-based investment fund Accel Partners for 37 million euros. In the fall of 2015, the company was listed on the Euronext stock market, and by the end of the year had a market capitalization of 655 million euros. “It was one of the first French digital start-ups to do an I.P.O.,” Michael said.

For the next two years the brothers took what they describe as “a break,” to spend time with their families and explore other avenues. They invested in Back Market, a French website that sells reconditioned electronic equipment, and BlaBlaCar, a French online marketplace for car-pooling. Then they heard about the Rykiel woes. “It made us dream,” Eric said.

Though they have never worked in the luxury sector, they were sure they could run Sonia Rykiel. After all, at Showroomprive.com, they launched #collectionIRL, an in-house women’s wear label. “We are ambitious,” Eric said. “And we have experience.”

The first round of takeover offers came in July. Bidders included the former Balmain chief executive Emmanuel Diemoz, the French real estate entrepreneurs Nicole Levy and Julien Sedbon, and a Chinese investor. The Dayan brothers were not among them. “The timing wasn’t great — it was July, vacation time,” Eric said. “The information escaped us, and we missed it.”

In the fall, David saw that French court was about to choose a new owner for Sonia Rykiel. He asked Eric and Michael if they were they still interested. They were. “This was on a Thursday,” Eric said. “And the court date was Monday, at 11 a.m.”

The brothers spent the weekend hunkered down with their lawyers, their bankers, “and a lot of coffee,” Eric said. They drew up a business plan, got the bank to cut a sizable check and went to court. In their dossier, they asked for the company name, the unsold stock, the licenses (eyewear, homeward, linens, and children’s) and archives, which are stored in a warehouse near Tours, in the Loire Valley.

They skipped the real estate, including the company’s flagship store and headquarters on the Boulevard Saint-Germain, a property still owned by the Rykiel family. Like showroomprive.com, they wanted to make Sonia Rykiel primarily an e-commerce fashion brand. Luckily, as it turned out. “With coronavirus, it would have been a heavy lift with the boutiques,” Eric said. “We were lucky not to take them.”

The courtroom was standing room only. The brothers’ bid was one of nearly two dozen that included two American funds, a Chinese fund, a Korean family fund and Sonia Rykiel’s former son-in-law and former C.E.O., Simon Burstein, of the Browns retailing family in London. The judges opened each packet, one by one, and read the price and pitch out loud.

“We kept holding our breath, wondering: Are we still in the race?” Michael remembered.

In the end theirs was the highest bid — 10 million euros, according to a source who attended the hearing — and, after a three-week-long review, the court approved their proposal. When asked about what she thought of the new buyers, Nathalie Rykiel, who did not pursue buying back the company from liquidators, said by email: “I am looking forward to seeing how this new chapter will evolve.”

Since taking over, they have rebooted the brand’s social media accounts. On Instagram, they are posting pictures from the archives: old ads, runway shots and portraits of Sonia Rykiel, with some of her bon mots, like, “If you are beautiful, enjoy it; if you’re not, play with it.” Michael said, “We’ve had thousands of likes, and notes of support. People love Rykiel and happy to see it back online.”

They are staffing up the company (when they bought it, there were no employees) and are currently interviewing designers for the creative director post. “We would like to hire a woman,” Michael said. “We want that sensibility.” They will start with knitwear, since Sonia Rykiel was known as its queen.

Meanwhile, they plan to start unloading leftovers via the new website. Of the 80,000 pieces they inherited, they are posting 20,000, including accessories. The remaining 60,000 they will recycle, or upcycle. They want to dial back prices to the affordable luxury of Sonia’s era. This is where the perfume will fit in, too — an “accessible product for women to enter the luxury world,” Michael said.

Back when Rykiel was a thriving business, it had “600 points of sale in the U.S. alone,” Michael said. The Dayans “want something smaller, more of an ‘experience,’” Michael said. They are real estate shopping on the Left Bank — including talking to Ms. Rykiel about taking over the original Saint-Germain property — with the dream of housing a shop, offices, and perhaps a small hotel, all in one building. Moving into hotels is not such a stretch, Eric said; in the 1980s, he recalled, “Sonia redecorated the Crillon and the Lutetia.”

“It’s going to be great,” Michael said, with an air of unquestioned confidence. “You’ll see.”