There’s a piece of art that’s been on display in Faye McLeod’s studio for most of the last decade, depicting what she considers her “mantra.”

In another corporate office, such art might be a portrait of an eagle, soaring above the word “perseverance” or a modern black-and-white typographical poster with a phrase like “work hard and be nice to people.”

But in the office of Ms. McLeod, who is the visual image director of Louis Vuitton, the sign is a few lines of unpunctuated rainbow-colored text, inspired by lyrics from Notorious B.I.G.’s 1997 song “Hypnotize”: “Louis Louis Louis can’t you see how your world does amaze me.”

The phrase reminds Ms. McLeod, 49, that “whenever I’m sitting in the studio and we don’t have an idea for something, go into the archives,” she said. “The ideas are always there.”

About six months ago, the mantra helped inspire a new project, to celebrate Louis Vuitton’s 200th birthday: filling the windows of the brand’s 460 stores with trunks designed by 200 people.

Trunks are Mr. Vuitton’s legacy, the pieces upon which he founded the company in Paris in 1854. Using water-repellent canvas material, he designed his trunks with flat tops (as opposed to the more common round-top trunks, which allowed water to roll off but weren’t as easily transportable). 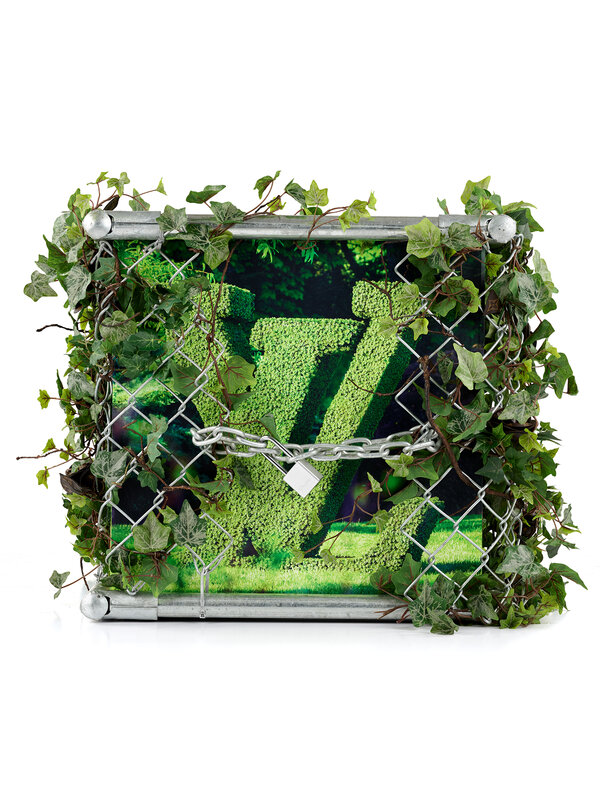 His son, Georges Ferréol Vuitton, greatly expanded the company and created the LV monogram, and today the brand maintains a rich collection of Georges’s drawings, advertisements and other historical materials.

“With Georges, we’ve got so much,” Ms. McLeod said. “But with Louis, we’ve kind of got trunks. That’s why we based a lot of the work around the trunks, because it’s what we’ve got in the archive. It felt the right thing to do.”

Mr. Thompson and Ms. McLeod didn’t want only traditional visual artists, but an assortment of “visionaries” who could “capture the spirit” of the mysterious Mr. Vuitton — like poets, scientists, explorers and activists, they said. These people were advised to think of their trunks “as a vessel: for an object, a dream, a future, a reflection, a desire.” (In the document briefing them on the project, the Louis Vuitton team included a copy of the “Louis Louis Louis” image.)

The contributors, who include Drake and Gloria Steinem, as well as LVMH designers like Marc Jacobs and Kim Jones, were given boxes with common dimensions but told they could redefine the shape at will. They could paint or sculpt, for example, or use videos, photographs, sound or augmented reality.

As a result, there are trunks made from jelly, mini-balloons and polished stainless steel. There are trunks covered in greenery (by Mr. Flower Fantastic) and tapestry (by Qualeasha Wood). There is a trunk that flies — made by a French aeronautical designer and tested recently inside the LV store on Place Vendôme in Paris, Ms. McLeod said — and another on skateboard wheels.

At one point, Vuitton asked a mushroom grower to turn a trunk into dust and then make mushrooms from the powder, but the collaboration ultimately failed to materialize.

Members of the K-pop band BTS covered their trunk in cartoonish doodles of whales, stripes, arrows, hearts and a large carrot. While a few tardy contributors’ trunks have not been returned to the brand yet, the BTS submission arrived “really quickly,” Ms. McLeod said. “They obviously knew what they wanted to express.”

Some trunks were more of a collaboration. When fashion’s favorite astrologer, Susan Miller, created an astrological chart for Mr. Vuitton, Ms. McLeod and Mr. Thompson’s team built a diorama of the chart using neon-colored planets. They positioned the galaxy inside a trunk and drilled peepholes on the outside, painting a night sky on the exterior.

Eventually Vuitton will release a book chronicling the collaboration, as well as exhibit the physical trunks and hold a charity auction with Sotheby’s. For each trunk, Louis Vuitton has pledged 10,000 euros (roughly $11,800) to charity; contributors were given a list of 15 global arts education nonprofits to choose to receive their donation.

Until then, images of the trunks will be displayed in Louis Vuitton store windows for 100 days, starting Aug. 4 — the founder’s birthday, the impetus for the whole project.

As another aspect of the project, in New York, the exterior of the Fifth Avenue store will feature a Godzilla-size digital image of Mr. Vuitton, rendered in checkered pixels, with the words “Happy Birthday Louis.”

The image — Mr. Vuitton is standing with his hands in his pocket and a distant gaze, evoking more of a young start-up founder posing in a men’s fashion magazine than a 19th-century trunk-maker — is not based on an actual photo, but that’s not for lack of trying. There just isn’t much left of the man behind the most famous name in fashion.

“We only have one image of him,” Mr. Thompson said. “We always wonder what he was actually like.”