Lou Northcote spent most of her childhood in Dubai flipping through glossy magazines and dreaming of someday gracing their covers. With a tall, thin frame, beautiful face, and a modeling career that started when she was just 10 years old, her fantasy seemed perfectly within reach. “Modeling was my whole life, and I thought I would always do it,” Lou says. But when she was 16 and began getting acne, she was mercilessly dropped by her agency and pushed out of the industry, told not to return until she had cleared her skin.

After moving to England for boarding school a year later, Lou’s breakouts went from bad to worse, and she soon found herself wearing makeup around the clock to cover up her cystic spots. “Even when we’d have sleepovers and I was in the other girls’ rooms or when I went down to check into school in the morning, I’d always have a full face of foundation caked on,” she remembers. It wasn’t until six years ago that she felt comfortable going makeup-free. 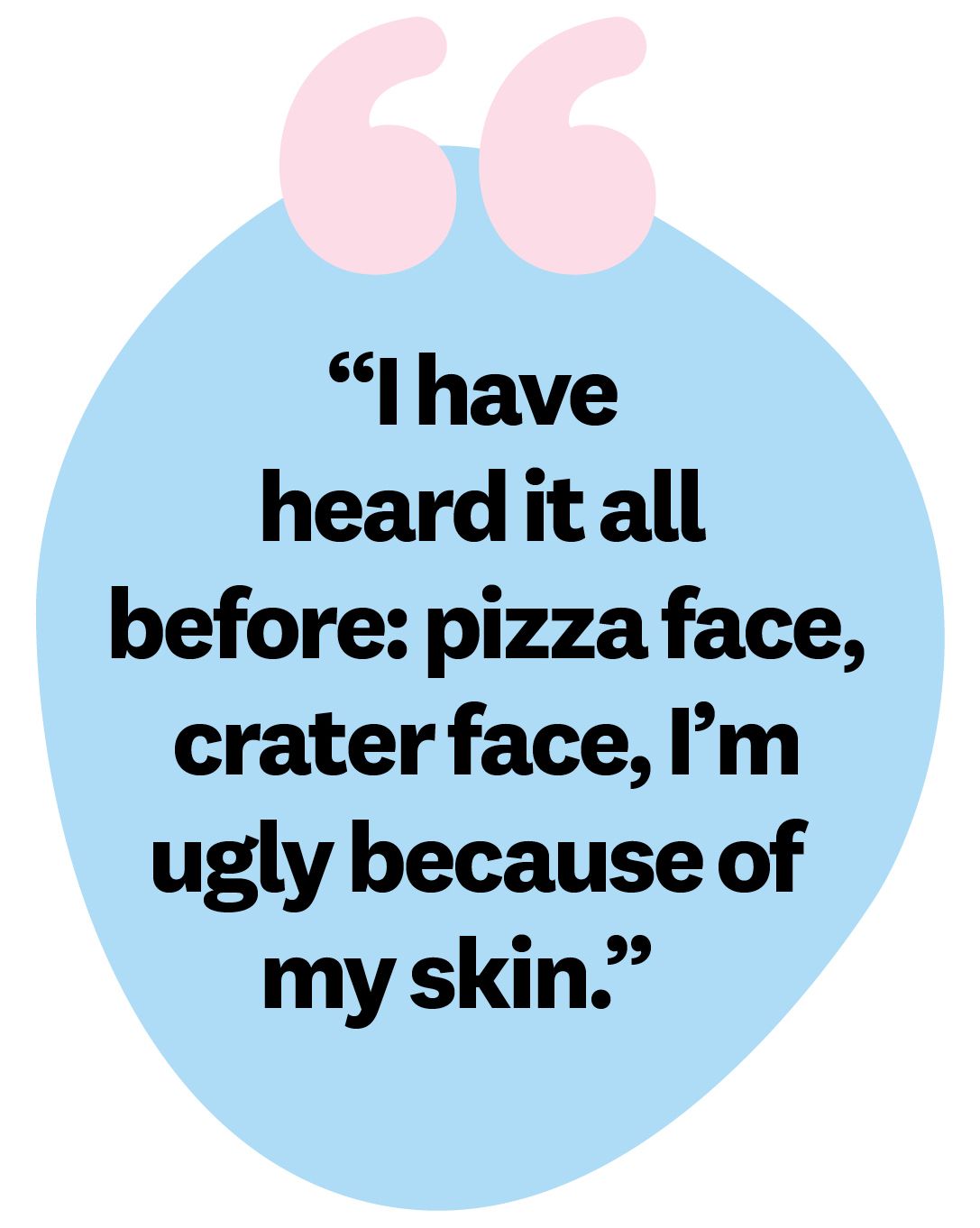 With the help of dermatologists, good skincare products, and some antibiotics, Lou’s acne started to clear up. And in 2017, a return to modeling seemed in sight. She was offered a place as a contestant on Britain’s Next Top Model, which she eagerly accepted. But as soon as she arrived on set, the breakouts reappeared.

“The first challenge was to take all of your makeup off and go bare-faced,” she says. “I just remember I kept apologizing for my acne, as though it were something to be sorry for.” Lou’s time on the show eventually came to an end, and she had to battle her acne all over again—and an entire country’s worth of television viewers had seen her pimpled skin.

When the first episode aired in the fall, the then-20-year-old was worried she’d receive hate and criticism from those watching, so she decided to take things into her own hands. “I thought, ‘I’m just going to post a photo of my acne and talk about my struggle with it and see if there’s anyone else out there like me,’” Lou says. Wearing a sweatshirt that had “Free the Pimple” emblazoned on the front, she snapped a selfie that showcased her acne-ridden face and shared it on Instagram alongside a lengthy caption detailing her fight against acne.

“I have heard it all before: pizza face, crater face, I’m ugly because of my skin, wash ur face, ur dirty, ur disgusting, ur greasy, etc., the list goes on and on,” Lou wrote, fully expecting the post to be met with mean or negative comments. Instead, the response was quite the opposite. Not only did she not receive any hate, but her bold move actually encouraged others to do the same, and pretty soon, dozens of others were taking to Instagram and Twitter to share their own experiences with acne.

In the following months, Lou continued posting about acne, taking her followers along on her personal journey and offering general acne awareness. But it wasn’t until writing about it for i-D Magazine that she started to see some real opportunity in so-called “Skinstagrams.” With a goal of not just sharing her own acne battle but instead providing a forum for anyone to tell their story, Lou created the @freethepimple_ page and #freethepimple hashtag in August 2018. “It was important to differentiate it from my own personal Instagram because it wasn’t only about me and my struggles,” she notes. “It was an entire movement.”

Nearly two years and thousands of posts later, Lou’s vision has indeed become a movement. “Social media is such an amazing tool, and I feel so lucky to have this platform,” she says. “If I’d tried to do something like this back in the day, I probably would have had to go petition parliament or something.” But rather than shout, “Free the Pimple” in the House of Commons, the model-turned-activist and her more than 43 thousand followers, between the @freethepimple_ page and her personal account, have shared raw, unedited photos of their blemishes and embraced what’s long been treated like a plague for exactly what it is: just a part of life.

While Lou’s efforts have been instrumental in shaping the Skinstagram movement, she is now joined by a host of other activists and influencers, who are similarly using social media to bring acne into the mainstream. There’s Kali Kushner, the 24-year old behind @myfacestory, blogger Em Ford of @mypaleskinblog, and Costanza Concha of @skinnoshame, alongside thousands of others sharing their breakouts and acne journeys with the world. The acne-positivity movement has also been embraced by celebrities like Kendall Jenner, Lili Reinhart, and Bella Thorne.

“I really try to use my platform to educate people, I’m lucky to have had access to all these dermatologists and all this different skincare, so I try to share that.”

As Lou’s #freethepimple campaign has grown, so too has its purpose. She now seeks not only to normalize and destigmatize acne among her following but also to provide useful and accurate information in a sector where truth is often hard to find. “I really try to use my platform to educate people,” she says. “I’m lucky to have had access to all these dermatologists and all this different skincare, so I try to share that.”

That being said, she never tries to push any products on her followers or insist that they use one thing over another. Rather, Lou uses her accounts to identify various ingredients and explain their benefits, to discuss the lesser-known side effects of acne—like the excruciating physical pain it can cause—and even to determine which makeup won’t irritate acne-prone skin. After posting a recent series on foundation that can be used with acne, the #freethepimple creator heard from one appreciative follower, who for years had tried and failed to find a foundation that worked for her breakouts—but thanks to Lou’s reviews, finally had an answer. “It’s really amazing to think that I’m actually changing people’s lives,” she says.

Lou’s influence has spread well beyond her followers. When she started #freethepimple, one of the biggest problems the skinstagrammer saw in the skincare space was the utter lack of models who had acne, even in advertisements for acne products. “It was always so frustrating,” she recalls. But as Lou’s movement has taken off, a number of brands—including Glossier, Augustinus Bader, and Neutrogena—have reached out to collaborate by consulting her expertise or featuring her in their campaigns. “I also love that there are now brands that aren’t just coming out with acne products, but their whole brand is about acne,” the activist says. “And these brands—ZitSticka, StarFace, and the like—are finally starting to use models with acne in their advertising.”

Even as Lou’s skin potentially clears up, which she jokingly claims will never fully happen, she hopes that her page and the movement it gave birth to will live on. She has undeniably played a pivotal role in bringing acne to the mainstream and creating an open dialogue around it, but the #freethepimple founder believes it’s up to the young people of today and of the future to continue forging the path. “I didn’t invent the pimple,” she says. “I just talked about it. And I’m so happy to see that it got others to do the same.” Lou still dreams of being on the cover of a magazine one day, but this time, it will be makeup-free.

This article is part of Women’s Health 2020 Acne Week. Click here for more.