Home » Is this man the 'Con Queen of Hollywood' who allegedly scammed hundreds of film workers out of £1m?

Is this man the 'Con Queen of Hollywood' who allegedly scammed hundreds of film workers out of £1m?

TRAPPED in the back of a car in Jakarta, Indonesia, Heather Pitchford’s dream of working in make-up on a blockbuster film was becoming a nightmare. As she pleaded with the uncommunicative driver to take her back to her hotel, she was convinced she was being abducted.

“I was terrified he was taking me somewhere I would be gang-raped and murdered, and I was ready to jump from the moving car,” she tells Fabulous. 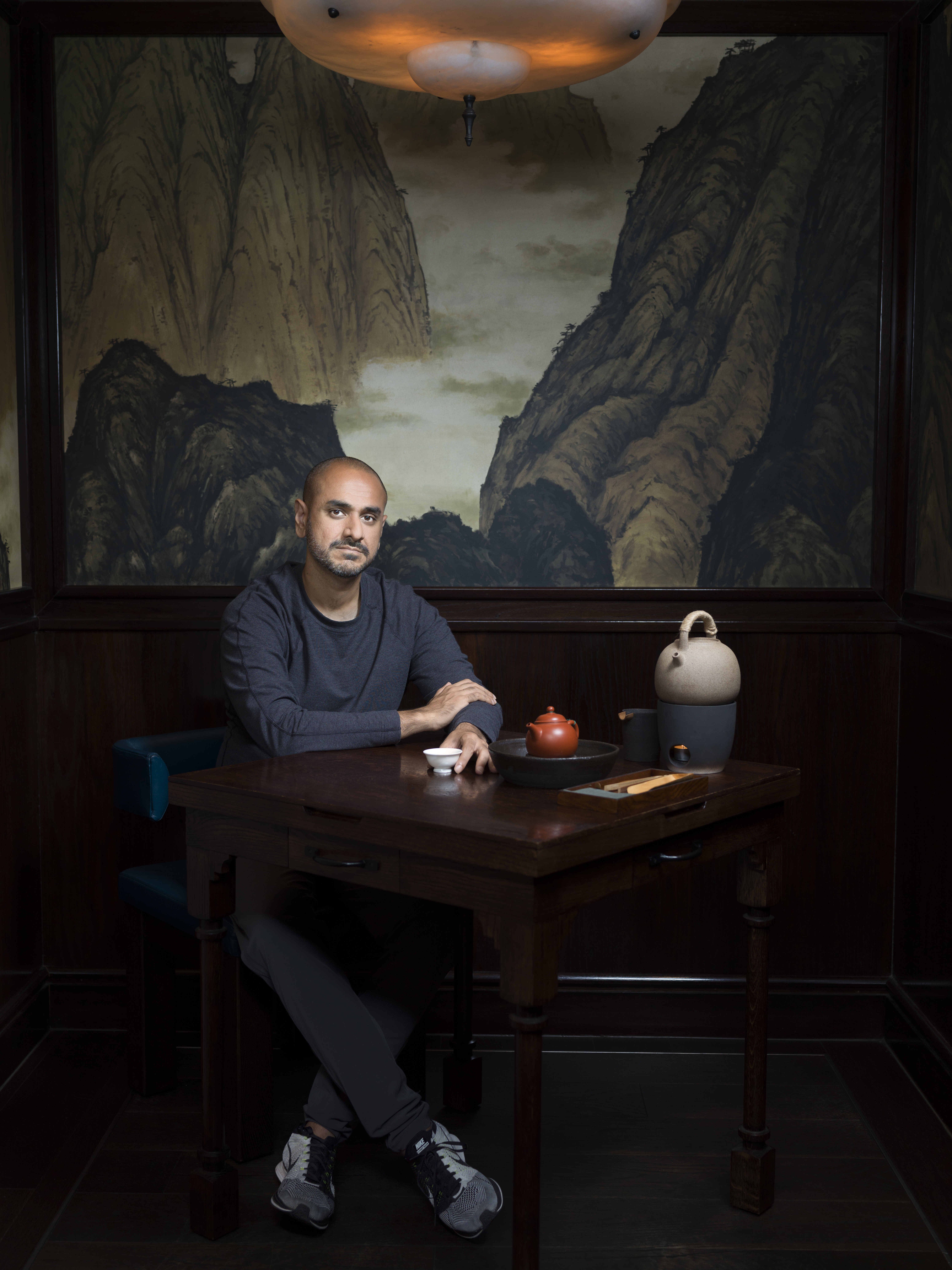 Heather, now 45, from London, was hoping to make it in Hollywood. Instead, she had become the latest victim of what is alleged to be one of the most far-reaching and complex “scams” ever to hit the entertainment industry. Some predict that the person accused of being the “Con Queen of Hollywood” could have ripped off up to 1,000 people for in excess of £1million from 2013 to 2020.

But even more shocking was the revelation, according to two high-profile investigations, that the alleged Con Queen was actually a man. Suspect Hargobind Tahilramani (pictured above) was arrested in the UK in November.

Heather says she was targeted in July 2016 when she received a job offer from a powerful female producer calling herself Leslie Zhao, who said she worked at a Chinese movie company called Huaxia Films. “Leslie” wanted Heather to work on a big-budget kung-fu movie called The Master, which was being filmed in Jakarta, Indonesia, and starred Rogue One: A Star Wars Story actor Donnie Yen. 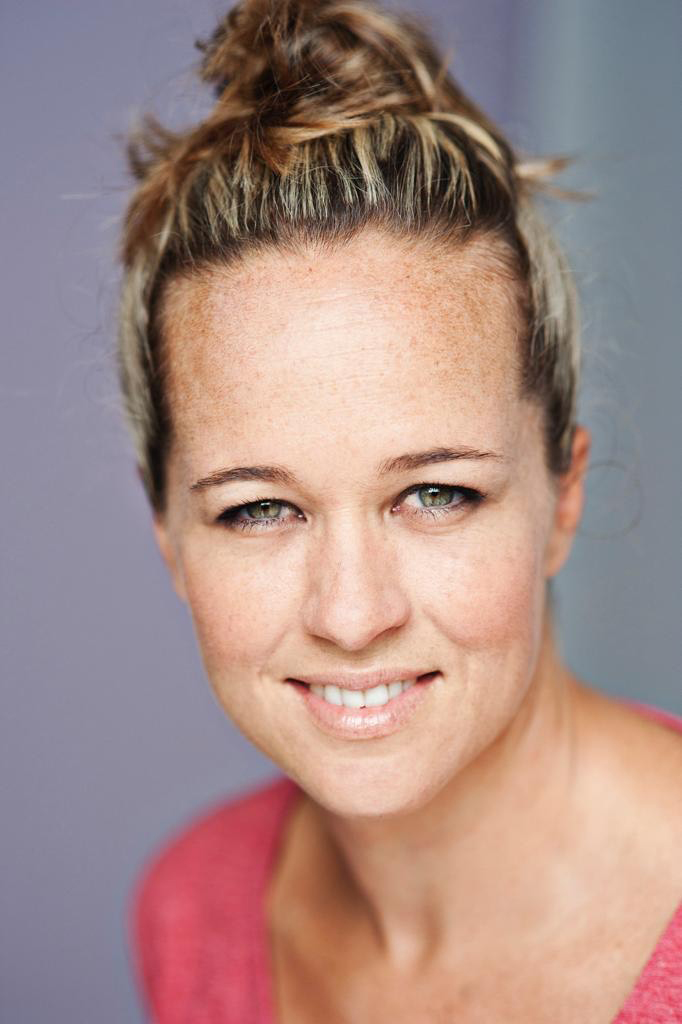 But little did she know that Leslie wasn’t a real person; she was just one of the suspect’s many alleged personas. Heather and her agent were taken in by the project details, which checked out on IMDb. Heather says she was told she’d have to cover her own airfare and pay the driver, but that her costs, which ran into several thousands, would be reimbursed. It was an unusual way of doing business, but not beyond the realms of possibility, and Heather says it was too big a job to miss. It would be her first big film make-up job after 10 years working mostly in TV.

However, once Heather arrived in Jakarta to begin filming in July 2016, she says she realised that something wasn’t right. She says she was picked up by a driver and driven to random tourist sites, but there was no sign of the rest of the crew and a promised meeting with the director didn’t materialise.

Heather claims to have checked with a friend in the industry, who told her that Donnie Yen knew nothing about the project. When she raised the topic with Leslie on the phone, she claims her concerns were “aggressively dismissed”, which was when Heather began to suspect that she was being scammed.

At the end of the second day, following another cancelled meeting with the non-existent director, Heather says she demanded to be taken back to her hotel. But the Waze navigation app on her phone told her she was being driven in the opposite direction. “I was terrified I was being kidnapped, so much so that I was ready to jump out of the moving car,” she recalls. “I was scared and crying, telling the driver to get me back to my hotel right now.” In the middle of the horrific journey, she claims Leslie called, asking why she was upset. “Every time I questioned her about there being no meetings or crew, she came back with a retort. She made me feel like I was crazy and wrong to question her – that was her tactic.” 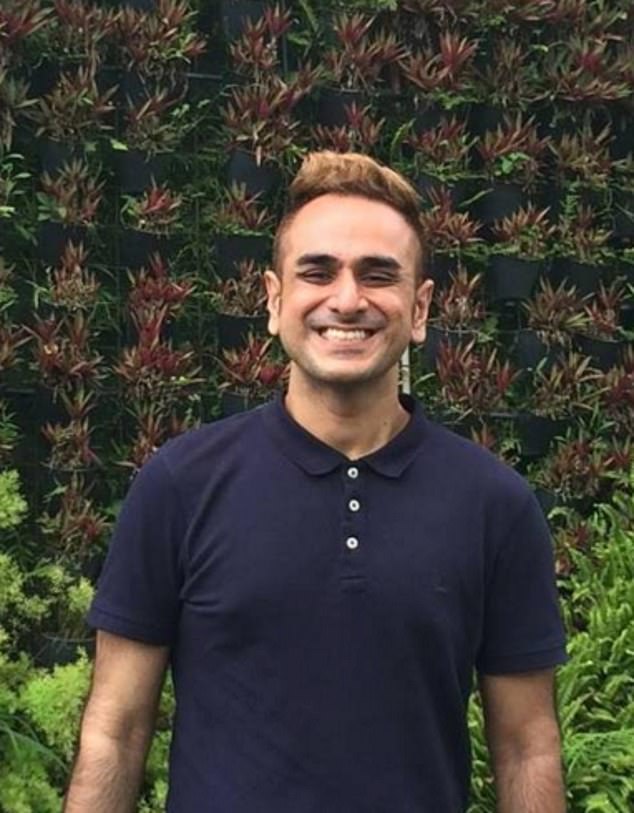 When Heather finally arrived back at her hotel, she contacted the British Consulate to explain that she suspected she was being scammed. She was advised to pack her bags, head to the airport and get on the next available flight home, which she did the following morning. “When I got on the plane and finally felt safe, I fainted because I was so relieved to be out of there,” she says.

Back home in the UK, Heather says her agent contacted Leslie, who said it was all a misunderstanding and that they would be reimbursed the money. But it never came. She says Leslie’s phone number then went dead, as did her email address – she had disappeared. Heather reported the matter to the police, but was told it was hard to prove it was fraud and there was little they could do.

Another of the alleged Con Queen’s “targets” was British hair and make-up artists’ agent Mandi Martin, whose clients have worked on movies such as Wonder Woman 1984 and Suicide Squad. She claims she was contacted by the scammer in June 2016 – also to work on The Master.

“Although Leslie sounded like a woman, I had suspicions straight away, as she was aggressive on the phone,” says Mandi. “When she told me there was a make-up and hair budget of over £100,000, I thought it was far too high. Something didn’t feel right.” 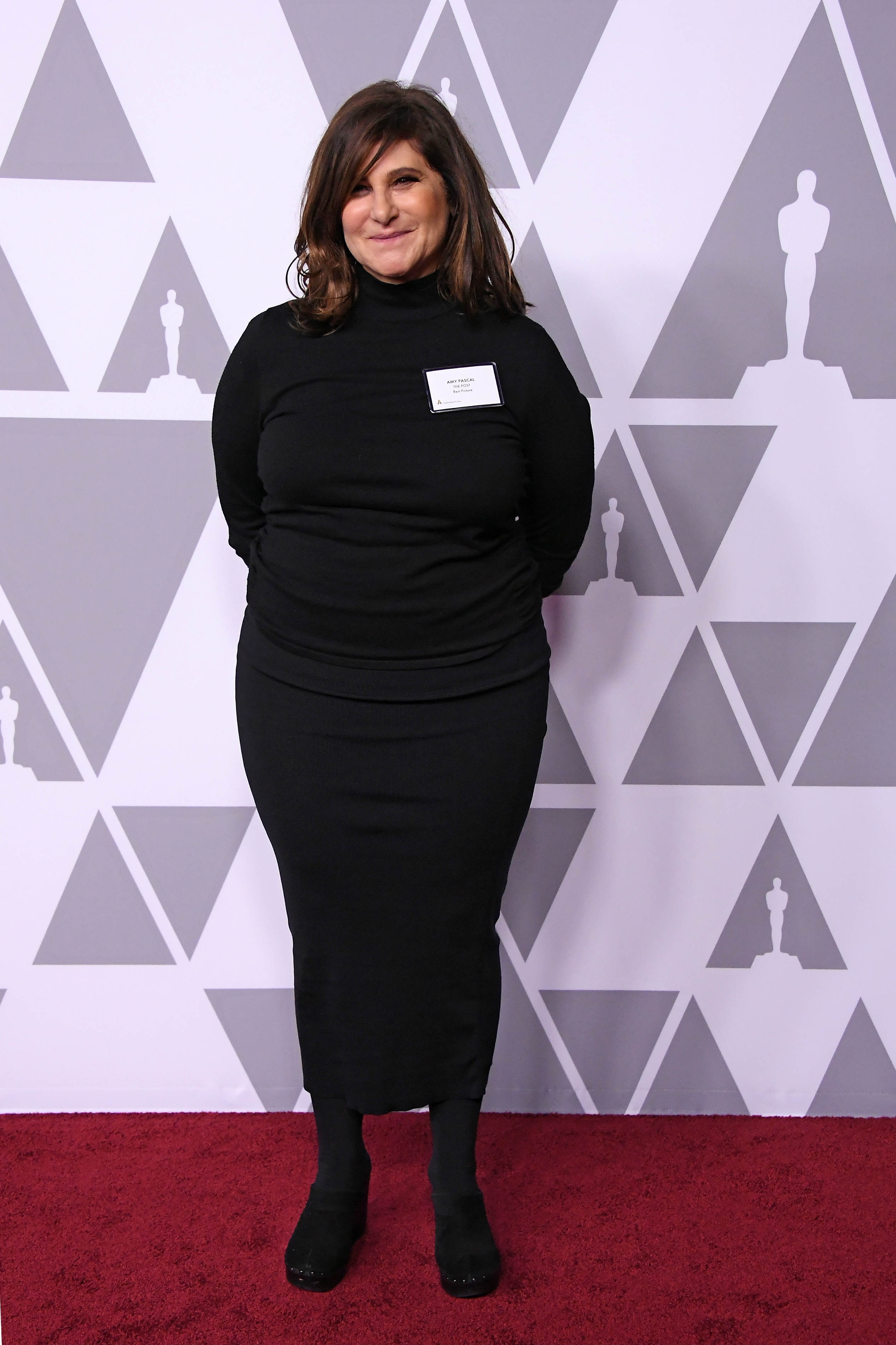 Mandi claims she suspected Leslie was a scammer but, curious, she decided to play along, with the chance of exposing the scheme. Eventually, in July 2016, Mandi told Leslie she could use one of her artists in order to continue the negotiations and discover what the ruse was, but had no intention of fulfilling the deal. Satisfied, Leslie sent over forms requesting information, such as passport number, next of kin and bank account details.

But Mandi says that when she told Leslie she had changed her mind, and wouldn’t be able to provide a make-up artist, “Leslie went mad”. She claims she begged her to reconsider, and sent a fake contract saying the artist would need to pay for their own flights and pay the driver and fees on location. “Alarm bells rang even louder,” Mandi says.

“We are a professional agency and don’t pay for flights up front. She started shouting at me, but I didn’t want to play the game any more. I said, ‘Please don’t call again,’ and hung up.” Mandi claims Leslie tried to call back the next day, but she declined her calls.

“I knew I had to warn others about the scam,” Mandi says. “We wondered if she was trying to get women involved in drug or sex trafficking, as the only people she had asked for were young women.” Mandi says she reported the “scam” to the National Fraud and Cybercrime Reporting Centre, but when they asked what the fraud was, she was uncertain. “They said they couldn’t register it if no fraud had happened,” she says. So Mandi emailed other British agents she knew – some of whom told her they had also been “scammed” – posted a warning on Facebook, and informed her industry union, Bectu. 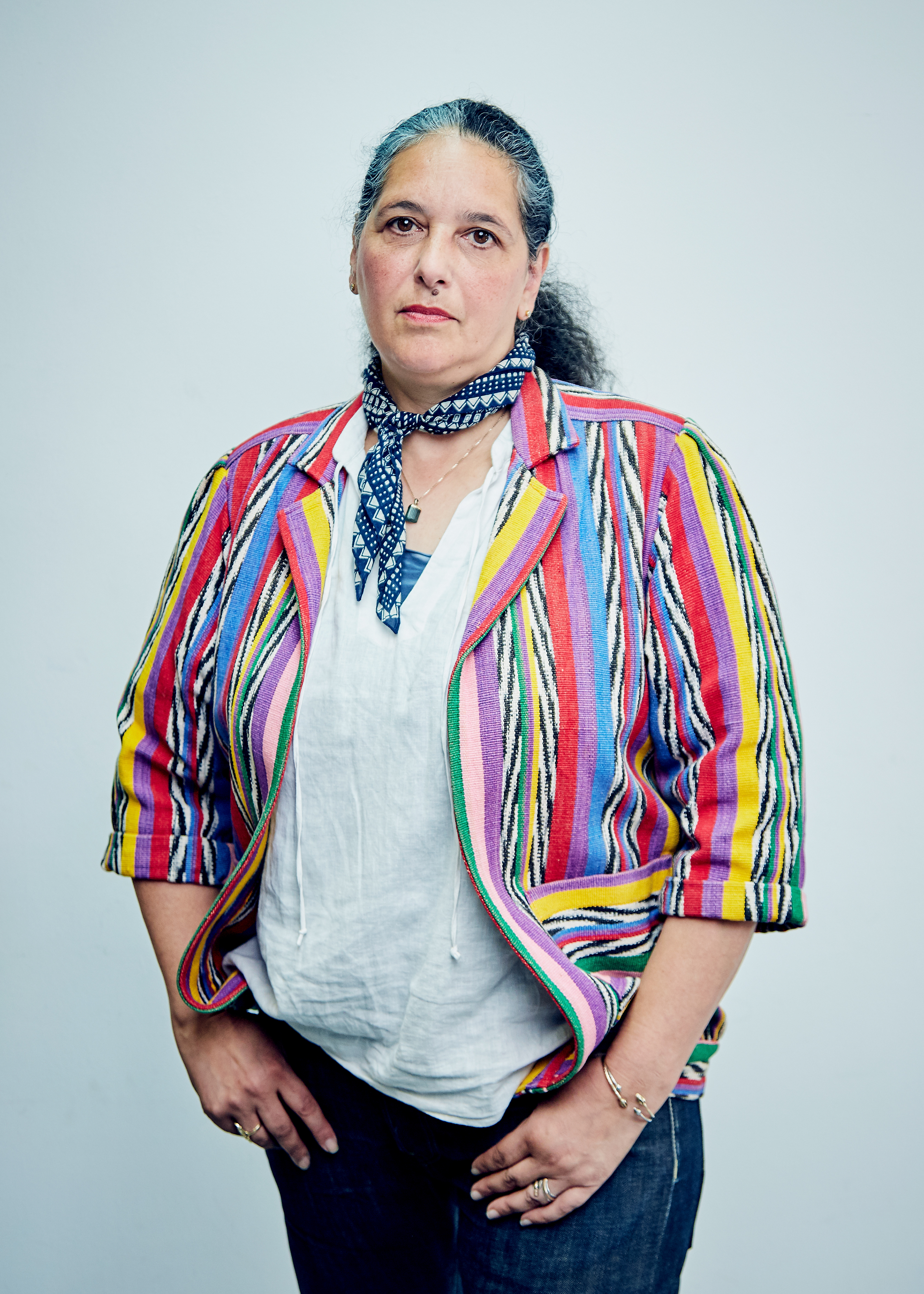 Suspecting they were also being impersonated, in 2017, some high-powered executives in the US hired New York private investigation company K2 Integrity to probe the case. Associate managing director Nicoletta Kotsianas began tracing and interviewing victims, including Mandi and Heather.

“Throughout this process, I’ve talked to hundreds of victims,” she reveals. “I have spoken to some people who have made multiple trips and lost close to £70,000 each.” As the story gathered momentum, in July 2018 The Hollywood Reporter ran a piece, speculating that a “cunning criminal organisation” was behind a swindle.

Nicoletta began using computer forensics to analyse documents and emails, and as her investigation progressed she became convinced that, rather than a crime mob, there was just one mastermind behind the sprawling web of deceit.

In December 2018, US-based photographer Carley Rudd posted claims of her experiences to thousands of her followers on social media. Over the course of the year, she heard from 1,000 other people who said they’d had similar experiences. Each victim claims to have spent an average of £1,000 on “fees”. 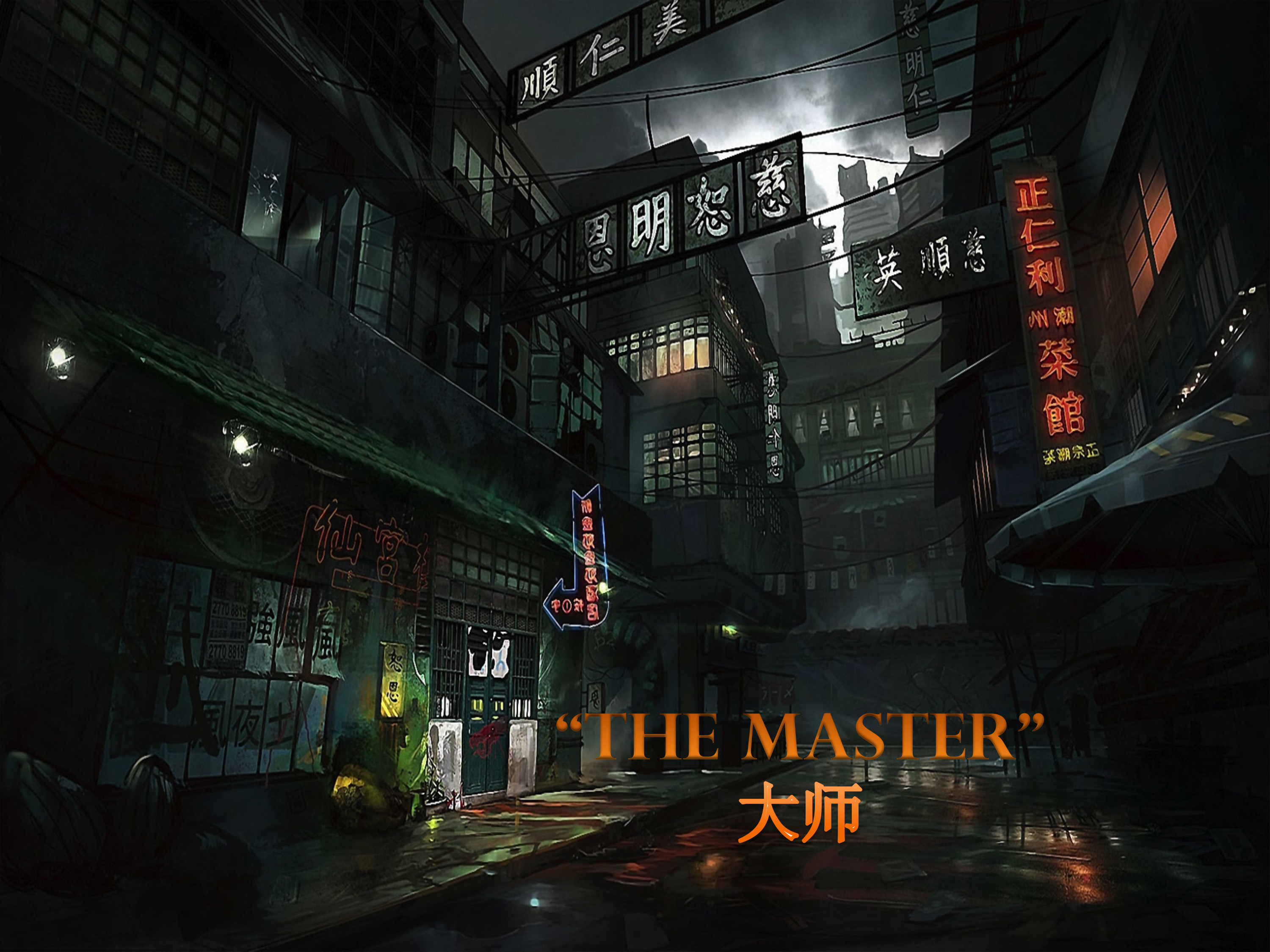 In the autumn of 2019, US journalists Vanessa Grigoriadis and Josh Dean began investigating the case for their podcast Chameleon: Hollywood Con Queen. Using a forensic speech expert, they analysed recordings some of the alleged victims had made of conversations with the Con Queen, arriving for the first time at the conclusion that the voice was possibly that of a man skilfully impersonating a range of people and ethnicities.

They shared the information with Nicoletta at K2, who built up enough evidence to convince the FBI to get involved. By tracing IP addresses and domain registration details, Nicoletta believed the main suspect to be Hargobind Tahilramani, 41, an Indonesian man living in the UK. Vanessa and Josh agreed. When the podcast dropped last October, it peaked at No.2 on the Apple podcast charts.

They got the breakthrough they needed from a falsified passport they obtained from one of the alleged Con Queen’s victims, Greg Mandarano. The screenwriter had met the purported catfisher in person six times in Jakarta, where he was apparently being conned into writing a screenplay for a fake movie. Greg had photos of the “scammer” and a copy of a falsified passport under the name Gobind Lal Tahil. Further searches revealed that Tahilramani, born in Jakarta into a privileged background, had moved to London and was working as a luxury food blogger.

He ran an Instagram account called Pure Bytes – which had 50,000 followers – where he would post pictures of his high-end lifestyle and joke about multiple dalliances with attractive men. 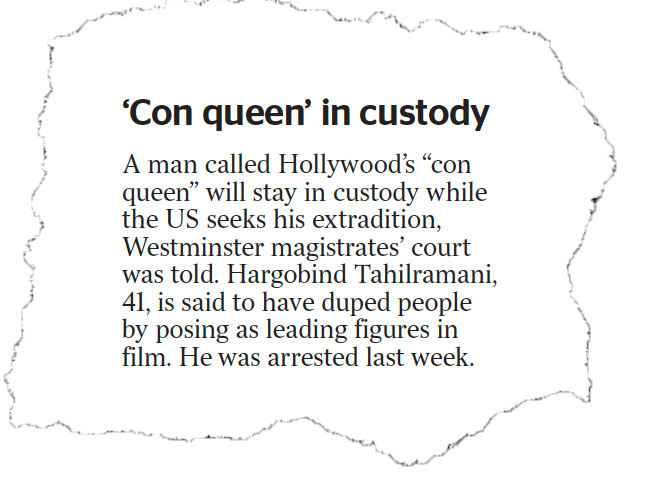 British police arrested Tahilramani in Manchester in November last year. He is currently in custody awaiting a ruling over whether he is to be extradited to the US, where most of the victims live. He faces eight federal charges, including wire fraud, conspiracy to commit wire fraud and aggravated identity theft.

At a hearing earlier this year, Tahilramani’s representative, Rachel Scott, told the court that part of his defence will revolve around possible prejudice to the case because of the attention attracted from the podcast and other reports.

For many of the alleged victims, the terror of being far from home and realising they may have been part of a sinister scam has left scars. 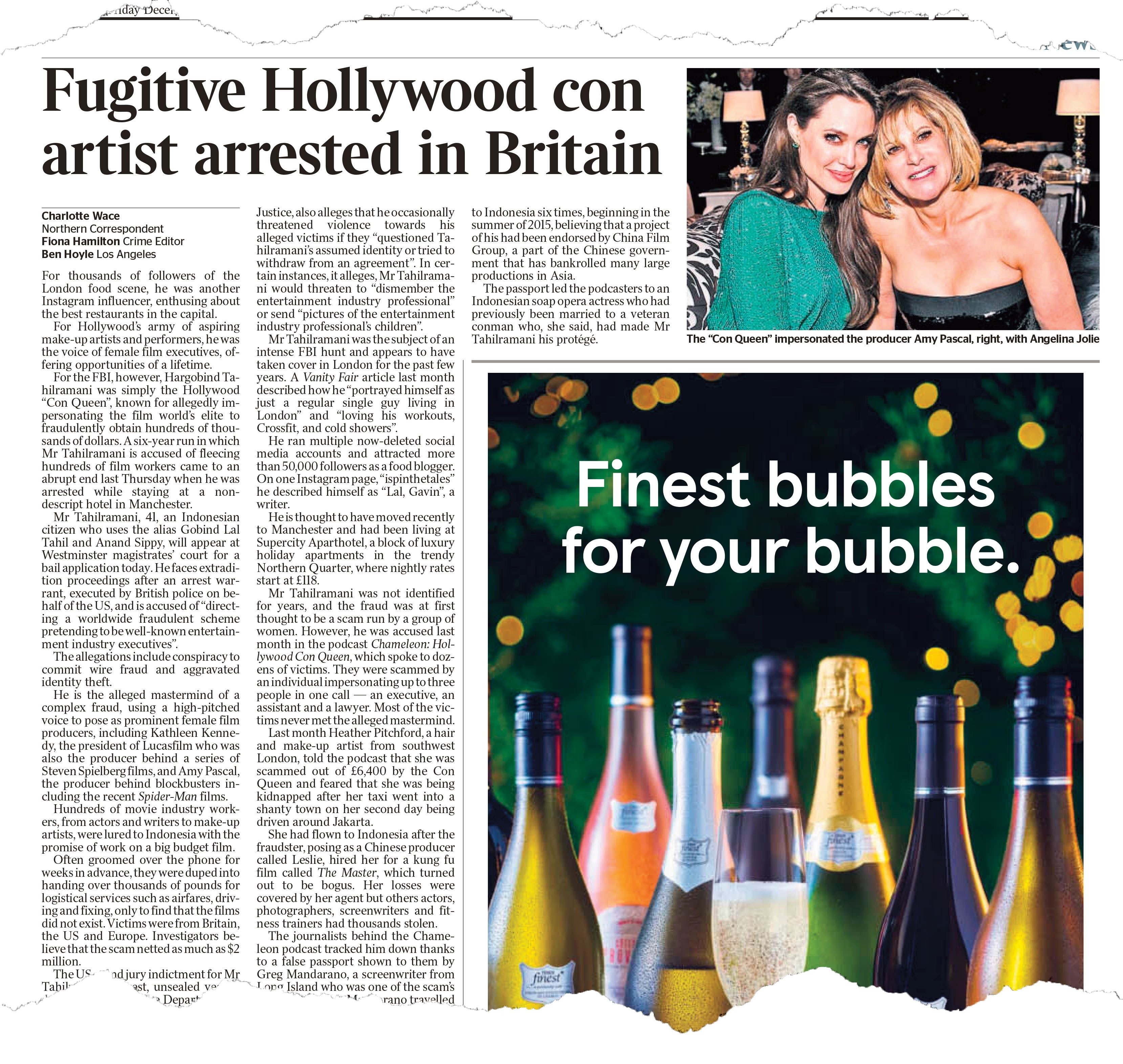 “It has affected me in ways that are not obvious, but I have had trauma counselling,” Heather reveals. “Knowing that it wasn’t just me did make me feel a bit less ashamed, but I was gutted about how long the suspect had to run before an arrest was made – it’s been so long and there have been so many victims. But I also realise we are lucky that he was caught, when so many internet scammers never get punished.”

Though she says she is doing well now, and has just finished working on a big production, Mandi admits that she was wary of people for months after her experience, and still wonders about the motivation behind the alleged scam.

“It wasn’t all about money,” she says. “There must be a psychological power game going on. Whoever did this was out to dash the dreams of others.”