Kate exudes elegance on first appearance as Princess of Wales

Kate Middleton stunned for her first appearance since becoming the Princess of Wales. The 40-year-old wore a knee-length dress for Saturday’s occasion. She wore black stilettos as she joined her husband Prince William and also the Duke and Duchess of Sussex, Prince Harry and Meghan.

The Prince and Princess of Wales and the Duke and Duchess of Sussex were dressed in all black as they walked along the gates of Windsor Castle.

The Duke and Duchess of Sussex held hands as they looked at the tributes, with Harry at one point affectionately putting his hand on Meghan’s back.

They were seen pointing at different tributes and discussing them as members of the crowd waved at them.

The four looked at tributes and flowers which have been left at Cambridge Gate following the death of Queen Elizabeth II. 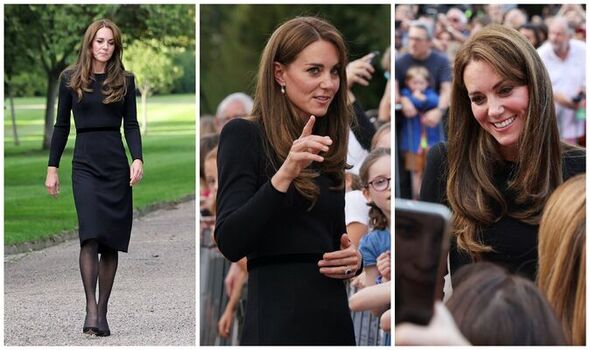 It is the first time they have been seen so close together since Harry and Meghan left their royal duties and moved to the United States.

And it is William and Kate’s first public appearance as a couple since their new titles were bestowed upon them.

Thousands of people have visited Windsor to pay their respects to the Queen..

Flowers have continued to pile up outside the gates of the late monarch’s favourite royal residence with notes and letters attached thanking the late monarch for her service.

Each member of the Royal Family was seen pointing at different tributes and discussing them with each other as members of the crowd waved at them.

William and Kate and Harry and Meghan then greeted well-wishes along The Long Walk outside Cambridge Gate at Windsor Castle with a number holding up mobile phones to take a photo of the royals who have not been pictured together since 2020.

Children could also be heard shouting, “We love you William”, as well-wishers expressed sorrow at the royals’ loss.