Marking a Missed Wedding Date With a Bouquet

Dr. Karan Ganjawalla, a 32-year-old maxillofacial surgery resident at Massachusetts General Hospital in Boston, ditched his scrubs for biking gear on May 23 and made a special house call.

Hopping on his bike, and with a bouquet of flowers in tow, Dr. Ganjawalla pedaled seven miles to Chestnut Hill, Mass., to the family home of Juhi Kuchroo, 30. The two were supposed to have had a wedding on that very day — their I-do’s’ would kick off a festive multiday Indian wedding celebration, spread over Memorial Day weekend, with some of the festivities taking part at the Fairmont Copley Plaza Hotel in Boston.

But then came the coronavirus, and yet another wedding date was destroyed, leaving in its wake two broken hearts and a 350-person guest list.

The couple, who were engaged April 6, 2019, were married instead on Thanksgiving Day, Nov. 26, at the bride’s family home in Chestnut Hill. Manik Razdan Kuchroo, the brother of the bride, received permission to officiate from the Commonwealth of Massachusetts. Mr. Kuchroo was one of five guests, along with the parents of the bride and groom.

Dr. Kuchroo met Dr. Ganjawalla at Harvard Medical School, where they bonded over their mutual love for masala chai tea, Bollywood movies and Dr. Ganjawalla’s ability to teach Juhi cardiac physiology. When their originally planned wedding day arrived, she found herself “in a difficult place,” mentally.

“I was not feeling so well,” she said. “I had never been through something like that before.”

But then came a knock on her front window, and the sight of Dr. Ganjawalla, bouquet in hand, simply overwhelmed her. 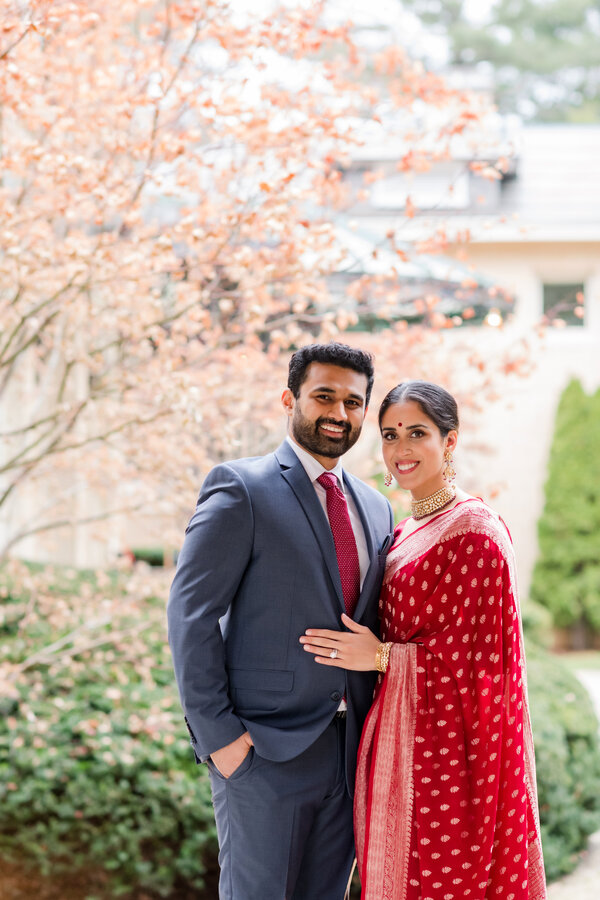 “He knew I was home, having a very difficult day, and hurting inside, so it was such a beautiful gesture,” Dr. Kuchroo said. (She was also a Fulbright scholar at the University of Oxford.)

The couple had already decided to socially distance themselves, so all Dr. Ganjawalla could do that day was knock on the front window, wave and blow kisses through the window before placing the flowers on Dr. Kuchroo’s doorstep.

“It had been a difficult day for both of us,” Dr. Kuchroo said. “But through the window, we had this moment, and I just stood there crying, and so did he.”

Within minutes, Dr. Ganjawalla was back on his bike and heading to the hospital.

“She’s an incredibly warm person who cares so incredibly deeply about the people around her and the relationships she’s formed,” he said. “She has always been a part of an incredible support system for me, she was always there for me, and I will always be there for her.”