2021 has been full of surprises, and it's been no different for Meghan Markle and Prince Harry.

The royal couple have dropped bombshell after bombshell in the last 12 months, providing enough jaw-dropping moments to last a lifetime. Despite setting up a new life for themselves in sunny LA – they have managed to stay in the spotlight.

So from outrageous TV moments to becoming parents for the second time, here are 10 of the Sussexes massive milestones for 2021.

Meghan and Harry revealed in 2020 they wanted to step down as "senior" members of the Royal Family and become financially independent.

But it wasn't until February 2021 they made the split official.

In the event which kickstarted the controversy surrounding them, the Palace released a statement confirming the couple's long-anticipated departure.

It said that "in stepping away from the work of the Royal Family it is not possible to continue with the responsibilities and duties that come with a life of public service".

The pair lost all honorary military appointments and Royal patronages, but remained "much loved members of the family".

Their exit – dubbed Megxit – set a precedent for the rest of the year.

In what some have dubbed the TV event of 2021, Meghan and Harry gave an exclusive, tell-all interview to Oprah Winfrey.

The couple sparked royal uproar after accusing an unnamed senior member of the Firm of racism and suggesting other family members were jealous of Meghan.

They also told Kate was the one who had made Meghan cry during a row over bridesmaid dresses, and Harry felt "trapped within the system" like his brother and dad.

Their other bombshell claims included being cut off financially after Megxit and how the Duchess of Sussex had contemplated suicide while pregnant.

3. Messing around with Ellen

In her second major TV appearance, Meghan joined US TV host Ellen DeGeneres on the sofa for her self-titled show.

The duchess made several surprising revelations, and also took part in a cringeworthy prank which saw her imitate a cat before drinking milk from a baby bottle.

In other toe-curling clips, she giggled at her own royal title, told a hot sauce seller "mummy wants some heat, and referred to Harry as her "boo".

She followed in the footsteps of only a handful of royals to appear on TV, including Princess Diana and Prince Andrew. 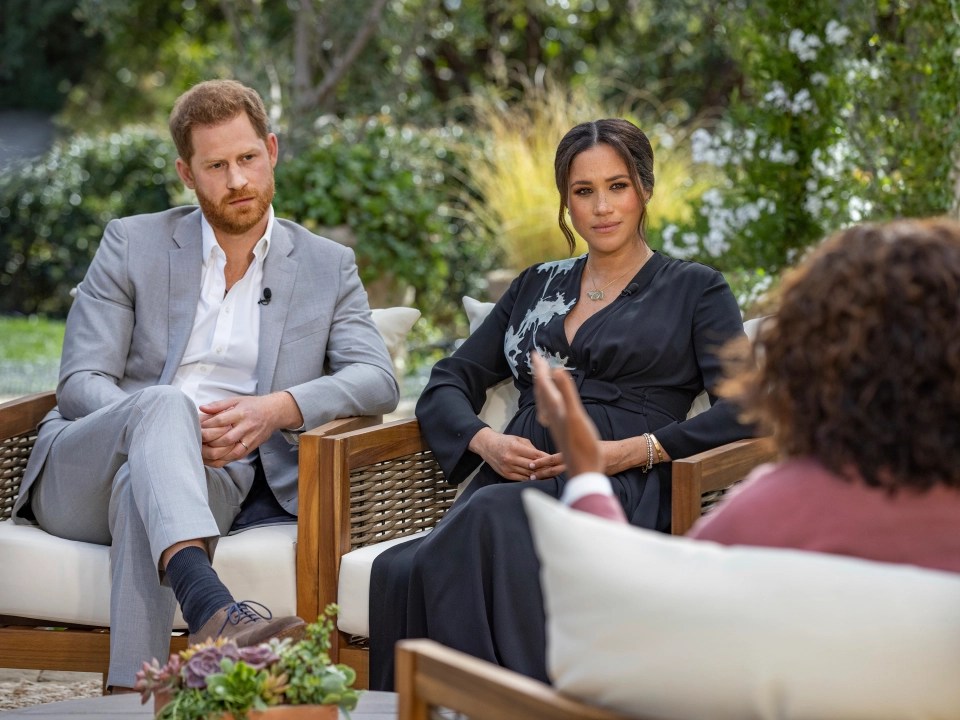 The Palace launched an investigation after Jason Knauf, who worked in comms for both the Cambridges and the Sussexes, submitted an official email in October 2018.

Meghan allegedly snapped "it’s not my job to coddle people" after aides were left in tears and humiliated by her "difficult demands".

Her treatment of staff was said to be "totally unacceptable" and she "seemed intent on always having someone in her sights".

One courtier even claimed that the duchess "governed by fear" while it was also reported there was a "febrile" atmosphere as Meghan's behaviour felt like "emotional cruelty and manipulation".

The former actress fiercely denied the claims – and her spokesperson said she is the victim of a "calculated smear campaign".

The pair also diverted from the royal 'norm' by revealing Harry had secured his first "job" post-Megxit.

In March, the prince bagged the role of chief impact officer at Silicon Valley startup BetterUp Inc – a coaching and mental health firm in the US valued at £1.25billion.

CEO Alexi Robichaux said while Harry would not manage employees, he was expected to be a part of all-hands meetings and special company events in the "meaningful and meaty" position.

His salary and working hours have been kept a secret, but similar roles at other Silicon Valley firms can command seven figures.

And in another move to become "financially independent", Meghan released her own children's book.

She described The Bench as a "love story" about growing old with Harry in "good times or bad".

The 34-page picture book features nods to her own family, including a red headed soldier and pet dogs, but aimed to "transcend the story" of the Sussexes. It topped the New York Times Best Seller list, but failed to make much of a mark in the UK.

Just days before the release of The Bench, Meghan and Harry welcomed their second child into the world.

As a child, Her Majesty used to say 'Lilibet' as she couldn't pronounce her name, and it then became Prince Philip's nickname for his wife.

"Beautiful" Lili's middle name Diana also pays tribute to the Princess of Wales, who died when Harry was aged 12.

Meghan had announced her pregnancy on Valentine's Day after revealing she had suffered a miscarriage a year after Archie was born.

Meghan celebrated a milestone birthday in 2021 as she turned the big 4-0.

To mark the occasion, the duchess released a glitzy comedy video alongside Bridesmaids star Melissa McCarthy.

In the two-minute clip, the pair joked about tattoos as they called on Hollywood pals to join her 40×40 mentorship programme.

The slick video offered a candid look into Meghan's new life in LA, with the duchess seen wearing neutral colours as she chatted on a laptop with the famous actress – and a juggling Harry even making a cameo.

In February, Meghan won her three-year High Court privacy battle against the publishers of the Mail on Sunday.

The 40-year-old sued Associated Newspapers Limited (ANL), also the publisher of MailOnline, over five articles that reproduced parts of a "personal and private" letter she wrote to Thomas Markle, 77, in August 2018.

A High Court judge ruled in her favour without a full trial, and the Mail on Sunday acknowledged her victory with a front page apology and agreed to pay "financial remedies".

It was a huge win for Meghan, who has repeatedly slated the tabloid press, describing it as "not just for me, but for anyone who has ever felt scared to stand up for what's right".

With so many shocking revelations, Harry and his family seemed further apart than ever.

He seemed particularly distant from brother William, after admitting to Oprah they were on different paths.

But the prince turned activist offered a glimmer of hope of a royal reconciliation when he flew home to the UK for the funeral of his grandfather Prince Philip in April.

The pair also reunited to unveil a statue of their late mum Princess Diana on what would have been her 60th birthday.