On That Bombshell Billie Eilish Cover for British Vogue

Billie Eilish wants you to know she is in charge, brash and self-assured enough to scrap the raffish image that helped garner her a world of fans in favor of something a little more … adult.

She vamps this month on the cover of British Vogue, a portrait of artfully crafted provocation. The singer once identified by her shock of green hair has gone blonde and full bombshell, swapping her trademark sweats for a style more domme than deb: pink Gucci corset and skirt over Agent Provocateur skivvies, accessorized with latex gloves and leggings.

The choice was her own, Edward Enninful, the magazine’s editor in chief, wrote in the June issue. “What if, she wondered, she wanted to show more of her body for the first time in a fashion story?” Mr. Enninful recalled. “What if she wanted to play with corsetry and revel in the aesthetic of the mid-20th century pin-ups she’s always loved? It was time, she said, for something new.”

To that end Ms. Eilish embraced the shopworn trimmings of female allure, offering the camera, without apparent irony, a nod to the sirens of golden age Hollywood and some of more recent vintage: Taylor Swift, Cardi B and Megan Thee Stallion among them.

And she is owning her look. An icon of body positivity who once cloaked her curves under neon tone track suits and hoodies, she appears to be done with all that. “My thing is that I can do whatever I want,” she told the journalist Laura Snapes, going on to disarm would-be haters with a pre-emptive strike. 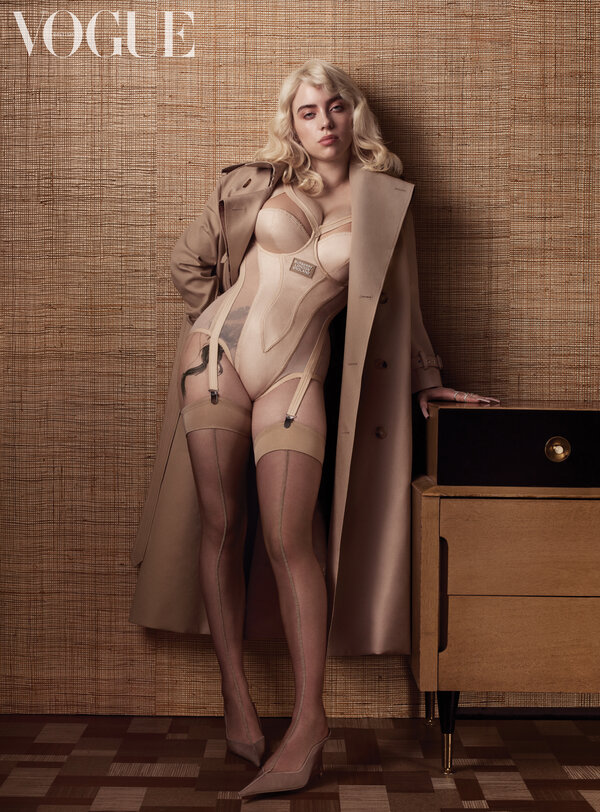 “Suddenly you’re a hypocrite if you want to show your skin, and you’re easy and you’re a slut,” Ms. Eilish said in the interview. “Let’s turn it around and be empowered in that. Showing your body and showing your skin — or not — should not take any respect away from you.”

Indeed. “Her pushback has been her agency in this,” said Lucie Greene, a trend forecaster and brand consultant. “After all, like many of her Gen Z peers, Eilish has a sophisticated understanding of visual language and representation. She’s built a following for confidently subverting beauty codes. And she’s applying the same confidence to this.”

Still, some may well question her agency, asking if, at 19, Ms. Eilish has the sense or sagacity to weather the possible fallout. Consider Tavi Gevinson, the fashion blogger turned writer and actress once known for her bulky layers and granny glasses. Writing in The Cut recently, Ms. Gevinson described doing a photo shoot at 18. Prompted to pose on her bed, she dressed in a skimpy romper, “pouting,” she recalled, “with heavily lined eyes and straightened blonde hair.” Sure, she was eager to sass up her image. And, she wrote, “if anyone who was there told me the whole setup was my idea, I would believe them.”

Ms. Eilish seems similarly inclined to present her metamorphosis as a shrewdly brazen, self-determined update. Some fans are cheering. “She looks just as awesome now as she did in oversized clothing,” Karin Ann Trabelssie, a 19-year-old student from Jelina, in Slovakia, said via text. Like Ms. Eilish, she once evaded scrutiny, hiding a frame she described as curvy under baggy shirts and trousers. Exultant at her idol’s new image, she wrote, “I very rarely see anyone with a similar body type to me do something like this. It’s empowering.”

Others feel betrayed. “Before: unique, different, a class of her own,” Stewin @jetztissesraus posted, on Twitter. “After: mainstream, exchangeable, slick and polished. Why?”

That question was bound to arise. In an earlier phase of her career, Ms. Eilish could claim the distinction of being a one-off. A stylist, she insisted, had no place in her life. “I could easily just be like, you know what, you’re going to pick out my clothes, someone else will come up with my video treatments, someone else will direct them and I won’t have anything to do with them,” she said in a profile in The New York Times. “But I’m not that kind of person and I’m not that kind of artist.”

Yet for Vogue, she placed her trust and vaunted image entirely in a team, one that, as it happens, was led by Dena Giannini, the magazine’s style director, with input from top rung designers including Alessandro Michele of Gucci. Her transformation would seem to suggest that Ms. Eilish is content these days to abandon her formerly maverick stance in favor of a fetish-tinctured bombshell look that seemed hackneyed when Madonna was a girl. If her reinvention poses a risk, it is that of becoming just another cliché.