Princess Kate and Duchess Meghan matched with their accessories on Monday as they attended Queen Elizabeth II’s funeral.

The pair looked sombre as they attended the service in all-black ensembles, both wearing elegant wide-rimmed hats. 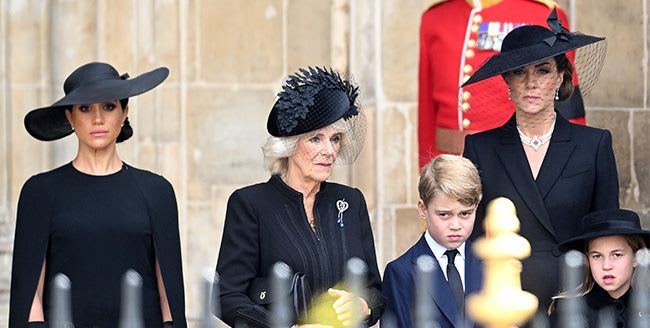 The Princess of Wales wore a sophisticated black dress, which she teamed with a pearl necklace that belonged to the Queen. She paired the hat with a subtle black veil, with her glossy hair in a sleek up-do.

The Duchess of Sussex opted for a black cape midi dress with her wide-rimmed hat, featuring wide batwing sleeves and a boater neckline. As for her accessories, Meghan wore the diamond and pearl earrings given to her by the late monarch.

Walking alongside each other in the chapel, the similarities between Kate and Meghan’s hats were clear in style, though Duchess Kate’s hat features a sleek ribbon tied around the base with a sleek velvet material, while Meghan’s hat came in a floppy design.

Kate’s veil was worn as part of royal funeral traditional dress codes, and are typically made from lace, tulle or netting.

The Queen’s funeral took place in Westminster Abbey on Monday 19 September. Members of the royal family filed in together, with the Princess of Wales walking Prince George and Princess Charlotte, as the Prince of Wales walked on the other side of the children – while Meghan walked alongside her husband Prince Harry.

Make sure you never miss a ROYAL story! Sign up to our newsletter to get all of our celebrity and royal news delivered directly to your inbox.