Sneaker Resale Sites: A Hot Category in Midst of Pandemic

As the world adjusted to the new normal brought on by COVID-19, the sneaker resale market thrived like never before.

The top resale players experienced an increase in product volume and trading that eclipsed previous years, so much so that their main issues, aside from maintaining the health and safety of their workers, were handling the influx of inventory and managing payouts for sellers.

Sneakerheads took to the resale market for liquidity, in response to lockdowns and job losses and even reduced prices on their sneakers in the immediate. The resale market is dependent on new products entering the market and consumer demand, and this was threatened due to the global lockdowns, but once Nike, Adidas and the top sneaker companies found their footing in the pandemic, it was off to the races in retail and for resale.

Goat, which debuted its first advertising campaign during the NBA Playoffs last year, recently closed a $100 million Series E funding round, increasing its valuation to $1.75 billion. The ad was centered on the new apparel offered on the app, which first launched in 2019. StockX also received funding in 2020, totaling $275 million, and increasing its valuation to $2.8 billion.

“Once the stores closed, we saw a huge acceleration in e-commerce and buying online,” said Goat Group cofounder and chief executive officer Eddy Lu. Goat further established its international presence last year by opening locations in the U.K. and experiencing growth in Asia, particularly in Japan, Hong Kong and Australia. Lu added that there are currently more than 600,000 sellers.

“Demand will remain strong in 2021 coming out of the pandemic,” said Cowen research analyst John Kernan.

As a result, the top sneaker resale players ended 2020 with an increased focus on the global resale market and are looking optimistically to 2021. But are there any pitfalls along the way?

StockX senior economist Jesse Einhorn said last April that the average prices on the 500 most popular sneakers on StockX declined 4 percent from February to March. But while 300 of those sneakers declined in value, another 200 actually increased in value, providing a sliver of hope. As of late last year, the 500 most popular sneakers on the site were priced 25 percent higher than they were at the beginning of 2020.

The market benefited from a collective shift among consumers to e-commerce due to store closures, and hyped releases such as the Nike SB “Chunky Dunk” with Ben & Jerry’s, as well as the ESPN documentary “The Last Dance” on Michael Jordan, which increased Jordan searches on StockX, Goat and The RealReal, the companies said in April. The Air Jordan XIII “Flint” sneakers were the fastest-selling sneaker in StockX’s history, according to CEO Scott Cutler.

The top players mentioned the need for faster payouts for sellers, which became an issue last year with increased transactions. Stadium Goods cofounder and co-CEO John McPheters noted fast payouts with the business’ experience that includes authentication and sneakers in inventory. Lu said faster payouts are a priority. And with resale sites further expanding operations globally, this brings more concern for fast payouts.

Also, some challenge the $30 billion estimation, including Matt Powell, senior industry analyst for sports at NPD Group, who said there is “no way to reconcile those numbers in my mind.”

“I look at the primary market,” he continued. “Not every Yeezy and Jordan is resold. I think the market is much smaller than the estimates that are out there. These platforms can be used for anything collectible. It doesn’t have to be just sneakers.” Powell further illustrated his point by mentioning StockX selling watches, which is one of many categories on its site, including the most recent addition, collectibles.

Stadium Goods entered the game with sneakers and apparel, but Goat added apparel only last year and highlighted the new category in its first advertising campaign. In addition, gamers turned to StockX and other resale sites to secure Nintendo Switch consoles when they were sold out at the retail level last March, and many also looked to resale again for deals on Playstation 5 consoles.

The new sneaker resale estimation for 2030 is evidence that sneakers are still viable and have more growing to do, but does the diversification of product offering signify that sneakers isn’t enough to grow a business?

Women are also taking an interest in sneaker resale. Einhorn said women’s sneakers outpaced the market by 70 percent last year and the number of women on the site not in the U.S. grew 130 percent. “Some of the biggest releases have been women’s exclusives,” he said. Cutler added that StockX crossed $2.5 billion in gross merchandise sales with Gen Z consumers, a further indication that demand for resold sneakers is likely to stay strong for years.

What does the next phase of growth look like for these resale business? Stadium Goods ended 2019 with a pop-up at Fred Segal — “The Fred Segal pop-up was very successful, and we’re looking to refresh that experience in the near future,” said McPheters — and opened its second retail outpost in Chicago on Oct. 1. 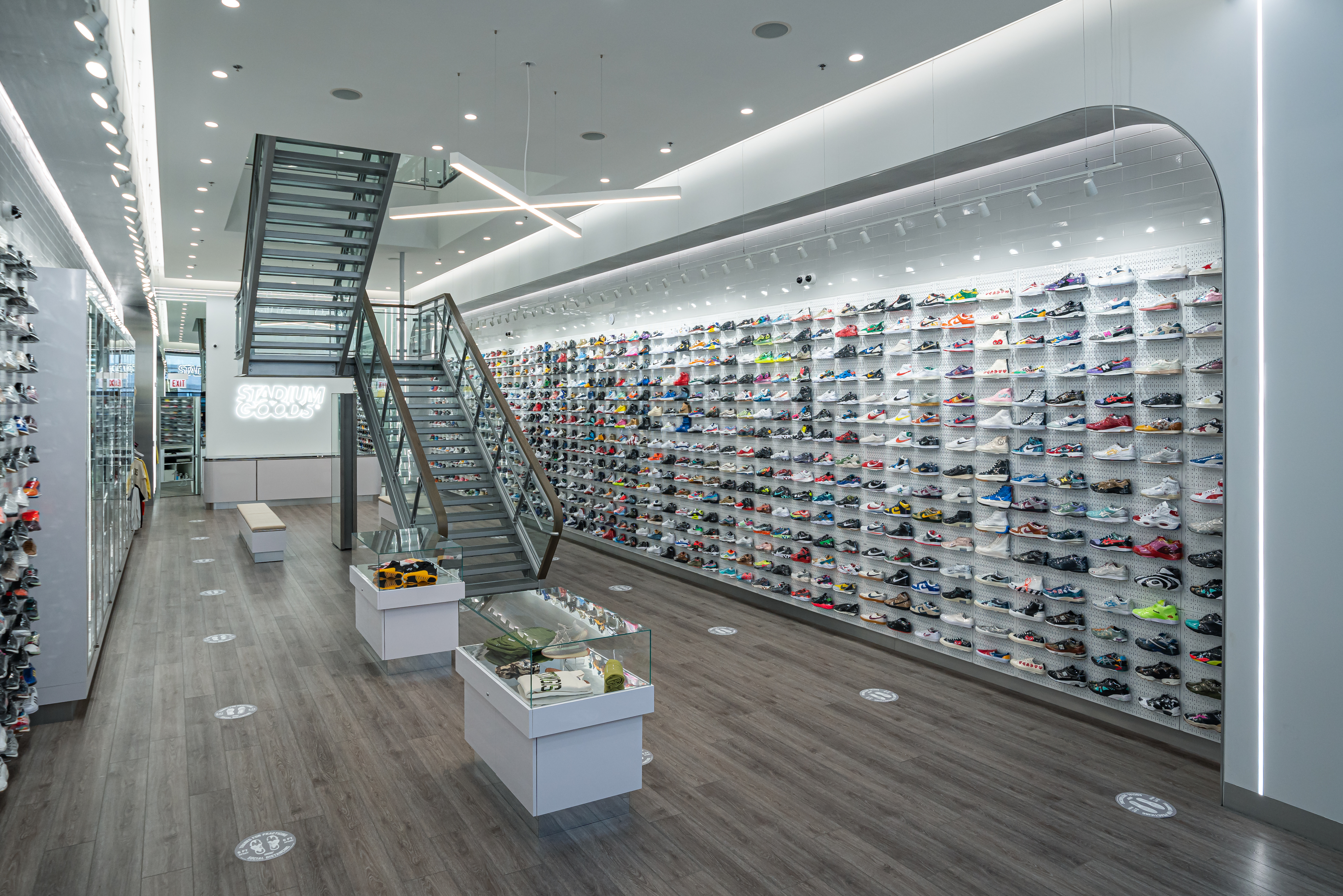 “We’re just getting started,” Cutler said. The company last year launched its DropX release method to complement its IPO model and will take three new authentication centers online. It also opened new authentication centers in Hong Kong and Toronto last November. Overall, it processed more than 10 million transactions in the first half of 2020 and its European business grew 200 percent year-over-year. Cutler said sellers outside of the U.S. grew 260 percent.

Einhorn noted further sneaker resale trends like Europe’s affinity for Air Jordan 1 Mid sneakers, and the Middle East’s preference for Yeezy 350 sneakers. He said resale prices have been stable and brands like New Balance have doubled their market share on the site thanks to collaborations with Kith, Aime Leon Dore, Bodega and Joe Freshgoods. Prices for Nike SB Dunks more than tripled in the third quarter of 2020 compared to the 2018 comparable period, and Yeezy 700 sneaker prices were also up over the first nine months of last year.

Even Crocs have been performing well in resale due to collaborations with Bad Bunny and Chinatown Market, and the change in lifestyle due to the pandemic. The same applies to Yeezy Slides, which increased 400 percent on the site.

As the popularity of resale continues to grow, authentication also comes into question as there is global expansion, increased product offering and consumer interest. Authentication is the foundation that sneaker resale platforms are built on. Red Points released a study in 2018 that cited the Organization for Economic Co-operation and Development’s statistic that the global trade in counterfeits is worth about a half trillion dollars and is expected to reach $1 trillion by 2022.

Last year, eBay revealed the expansion of its authentication service to sneaker styles priced $100 and above. The company partnered with Sneaker Con to approve the products and give a seal of approval in the form of a hangtag.

“We’ll scale over the next few months and expect every collectible sneaker bought for $100 or more — new or pre-owned —will be authenticated by early 2021,” said Jordan Sweetnam, eBay North America senior vice president and general manager, at the time of the launch of the service.

The company did not reveal how the service will work, specifically if there is a physical location for Sneaker Con to authenticate the merchandise, or if the authentication tags are counterfeit proof.

Counterfeiters have produced fake StockX tags to dupe buyers into buying fake goods. Cutler commented on this by saying, “When you’re buying from us directly, you have that trust and authenticity.”

Lu commented on Goat’s system, saying the authentication service uses data science and machine learning and reiterated: “No one knows sneakers better than Goat does.”

Buyers have taken to YouTube, Instagram and other social media platforms to say they’ve been sold fake products on the resale apps. Technology company Pro Exp Media launched post-authentication platform Arthentix to protect buyers from purchasing counterfeit sneakers through blockchain technology and augmented reality. They worked with Urban Necessities to kick off the program.

Pro Exp Media cofounder and president Jordan Thorsteinson spoke of con artists buying fake StockX tags to dupe buyers, or buying real sneakers and a fake, and then selling the fake in the real box. He said the Air Jordan 1 sneaker is the most counterfeited style on the market, and the Dior and Jordan collaboration has been counterfeited as well.

“Sneakers are the number-one most counterfeited, more than watches and clothing, and computer software so we decided on this market first,” said Arthentix founder Norm Lai. “The biggest problem is you can create a key gen for any serial number that’s generated. Louis Vuitton, Rolex, all very basic numeric serial numbers that can be generated. Authenticators have their jobs and we follow it after it leaves their site. The biggest weakness isn’t the authentication process but the post[-purchase period].”