Rescheduled weddings, graduations and other events that were postponed during the pandemic have given a major boost to retailers selling tailored clothing. Add to that the fact that many men have begun heading back to their offices — albeit not every day, but at least a couple of days a week now before potentially a more-regular return after Labor Day — and the situation has brightened considerably for the dressier side of men’s wear.

This historically has been the week when the men’s wear trade shows have been held in New York, and while they were postponed again this year due to the pandemic, many specialty stores have nonetheless traveled to the city to visit showrooms on their own as they aim to boost revenues by helping their customers refresh their wardrobes after more than a year of working from home.

And the top tailored clothing brands are reaping the benefits. Although challenges remain — notably slowdowns in production outside the U.S. due to factory closures and staff shortages as a result of the continuing health crisis — the overall mood is upbeat among manufacturers, which have also pivoted to better address a customer seeking comfort and performance attributes in clothing that can serve them for a variety of occasions.

At Samuelsohn, a successful limited launch of its Vue collection earlier this year has led the Montreal-based company to expand the range for spring 2022. Vue is an elevated sportswear/clothing hybrid collection intended to be appropriate for both the office and home settings. The line launched with just six items and will expand to 18 for the spring season.

“We’ve decided to aggressively expand Vue after seeing terrific adoption of the collection by retailers who have responded strongly to the versatility and timeliness of the designs,” said Stephen Granovsky, chief executive officer of Luxury Men’s Apparel Group, Samuelsohn’s parent. “Our sales have been strong and we’ve sold out of a number of items. We plan to push through this window of opportunity to position Samuelsohn as a go-to resource in independent stores and as an exciting new resource for doors like Nordstrom.”

Aliya Morehouse, creative director, said among the most popular items with retailers shopping for spring have been the utility jacket and the drawstring pants, along with cotton stretch seersucker, an overshirt and a lightweight knit vest. The collection also includes a new single-pleat tech suit with an unconstructed jacket. “Many men are still working from home and just starting to ease back into the office,” she said. “And this is the perfect uniform for that.”

Granovsky said tailored clothing manufacturers shifting into more casual offerings is nothing new, but Samuelsohn went all in by using its tailored clothing factories in Canada and training the staff to execute this new assortment. As a result, he said Vue is able to offer sportswear styling with the quality and craftsmanship of traditional tailored clothing. “They’re very sophisticated, beautifully made, more-casual garments,” he said. 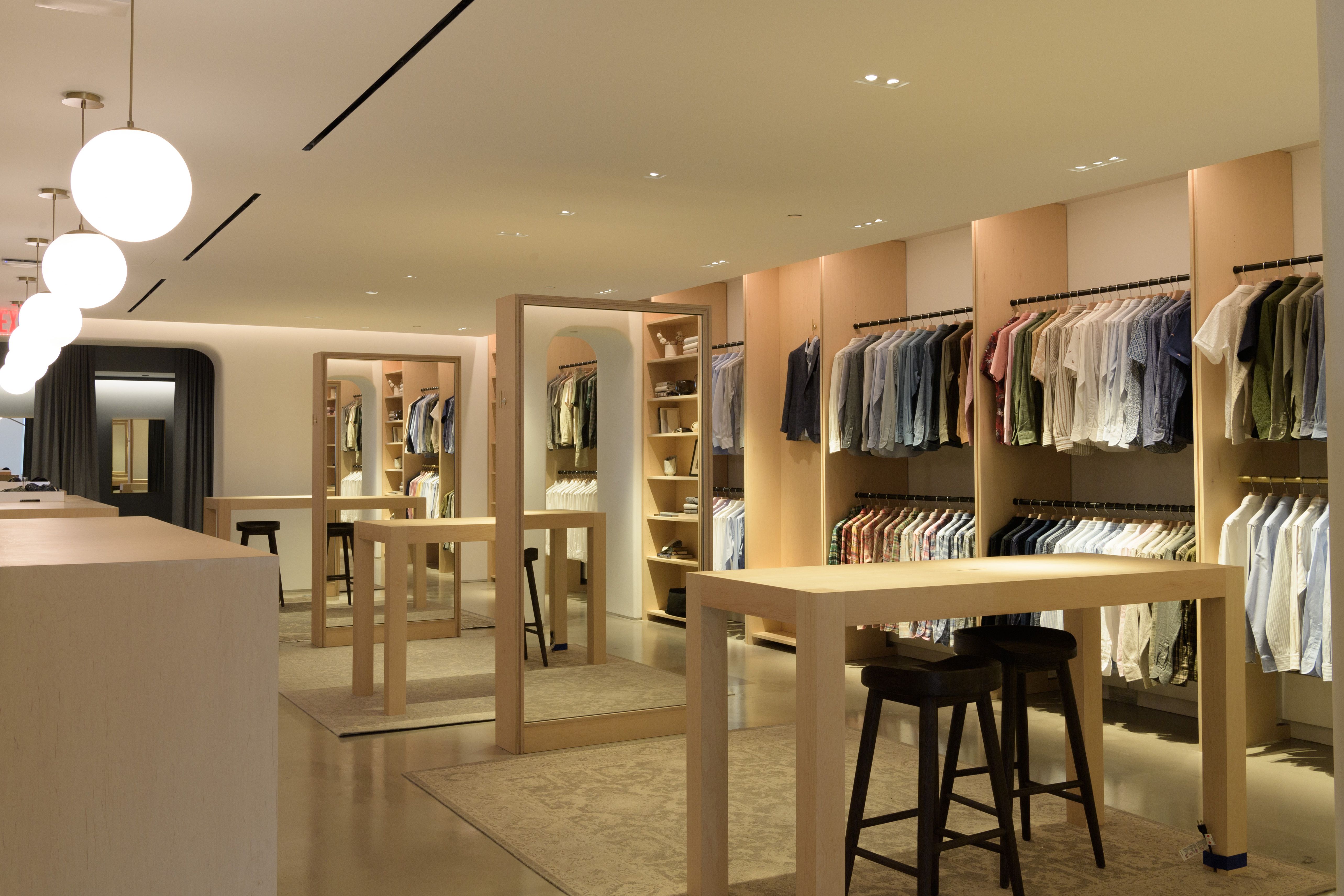 All told, Granovsky said looking ahead to next spring, he expects 20 percent of the sales at Samuelsohn to come from Vue and the rest from the more-structured tailored clothing. “As customers come to the showroom,” Morehouse said, “they haven’t wanted to see suits for many seasons, but they’re looking at suits again.” But within the tailored clothing option, the trend is moving toward softer jackets and pants.

Luxury Men’s Apparel Group also has the license for Hickey Freeman and for spring, the line will offer a new program called Hickey Freeman On Demand, which will expand both made-to-measure and in-stock options. In addition to expanding the fabric assortment for the made-to-measure lineup, the brand will launch New Essentials, an in-stock program of suits, jackets, trousers and formalwear featuring fabrics from the Carlo Barbera mill.

Granovsky said the company has seen a “very impressive bounceback” within its business in the past few months from customers who “want a refresh.” But he’s trying not to get his hopes up. “The concern has pivoted to when things would bounce back to whether it’s enduring. There are such massive delays in receipts from China that it’s driving sales to North American producers, but we don’t know how long that will last.”

Dan Orwig, president of Peerless Clothing, has also seen sales increase significantly but is concerned with the continued supply-chain delays. Vietnam, India, Indonesia and Bangladesh are all facing COVID-19-related issues that are impacting their factories where a lot of tailored clothing is produced.

“It’s really putting a wrench into the system,” he said. “The challenge everyone is facing is the supply chain and the different countries that are in lockdown because they’re not getting the vaccines fast enough. If we could get the goods, we’d sell them immediately.”

Despite the challenges, he remains upbeat. “It’s a much better problem than what we had 15 months ago,” Orwig said.

So while there may be some delays dampening spirits, Orwig said that overall, the situation has rapidly brightened over the past several months. “In the last three to four months, we’ve seen a steady ramp-up of business,” he said. Although he had been hopeful that the situation would eventually improve as the pandemic situation brightened in the U.S., the rebound “came earlier and was much stronger than we expected,” he said. “And we continue to be enthused by the velocity on a weekly basis.”

He attributed it to the uptick in weddings and other events that needed to be rescheduled from last year, as well as a planned return to offices, and he expects these to continue to spur sales through 2022.

He said retailers are primarily interested in “the true suit, from the traditional Lauren to high-fashion skinny fit for younger guys,” he said. “But it’s not the same-old suit. It’s more comfortable, performance-oriented and versatile — that’s what the customer wants in his post-pandemic wardrobe.” 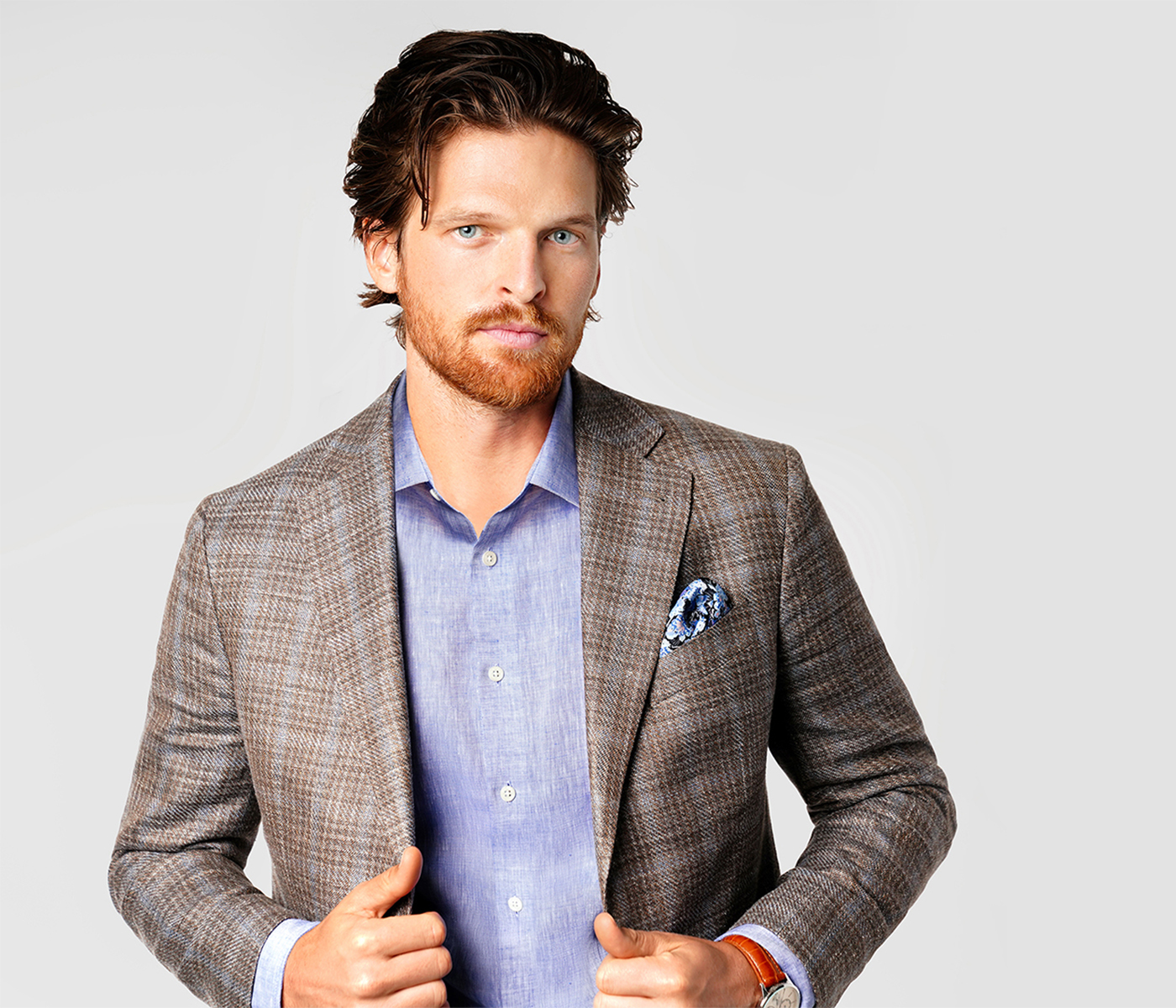 A look from Joseph Abboud.

Jeff Jones, vice president of merchandising for WHP Global, which owns the Joseph Abboud brand, has also seen an increase in interest in tailored clothing. In the U.S., the Abboud tailored clothing and sportswear is exclusive to Tailored Brands, the parent of Men’s Wearhouse and Jos. A. Bank.

“Tailored clothing has rebounded in a big, big way,” he said, pointing the return of special events, interviews and the planned return to offices after Labor Day. “There is enormous demand for classic suits and tuxedos,” he said. “But they’re a little more expressive than in the past — it’s not just classic black or midnight blue, it’s brighter shades, textural plaids and even earth tones.”

For the office worker, Jones said he’s seen “tremendous success with suit separates” that allow men to look “universally polished, yet are still comfortable. They can mix them with the athleisure pieces they’ve accumulated over the last year and wear them with a quarter-zip sweater, a turtleneck or even a fleece sweatshirt.”

Luckily, Jones said the Abboud brand hasn’t experienced any significant delays in production and shipping, but the company is still having a hard time keeping up with demand. “We can’t get the inventory in fast enough,” he said. “It sells the minute it hits the floor.”

Jones doesn’t see the demand tapering off anytime soon. “I see this continuing,” he said. “There is a constant evolution of what we know tailored clothing to be.” He said “soft separates will continue to gain tons of momentum for spring,” along with pieces offering performance features such as four-way stretch, water-resistance, concealed elastic waists and other special details.

“Athleisure is definitely making headway in the tailored world and we need to layer in more of these pieces going forward,” Jones said.

The interest in tailored clothing is also impacting made-to-measure brands such as Proper Cloth, which recently opened a 5,800-square-foot showroom in Midtown Manhattan. The brand, which was founded in 2008 as an online custom shirt-maker, has since expanded into suits, sport coats, outerwear and some elevated sportswear such as chinos, T-shirts and shorts.

Company spokesman Daniel Zisman said that when the pandemic hit, clothing sales were down more than 50 percent from 2019 as “demand for tailored clothing diminished overnight.” The company quickly turned to creating masks, which grew to represent some 20 percent of sales. But when interest in that category waned, Proper Cloth’s core products began to see a rebound.

Zisman said that starting in the spring, the brand saw a big surge in interest in back-to-work attire, mainly suits and shirts, and now, it is also seeing an uptick in more-hybrid options such as patterned sport coats and casual trousers.

“The post-pandemic man is dressing differently,” he said. “It’s more of a nice middle ground now.”