But it was the Frederick Law Olmsted Awards Luncheon, popularly known as the Central Park hat luncheon. A fabled rite of the spring social season, it returned last week with a splash, as the first major gala in New York City to take place in person since the pandemic put the charity circuit on hiatus.

Spread over two days and across various sites in Central Park, the luncheon drew more than 922 members of the city’s philanthropic, fashion and social elite, mingling and fanning out their finery, many for the first time since the protracted confinement of lockdown. It also raised more than $2.8 million.

“People are smiling, and you can actually see that they’re smiling,” said Gillian Hearst, the great-granddaughter of William Randolph Hearst. She wore a powder pink Philip Treacy raffia saucer and an effusively draped Alexander McQueen frock to match on Tuesday at the Conservatory Garden. “We are optimistically cautious that this is going to be the first of many of these events.” she said. 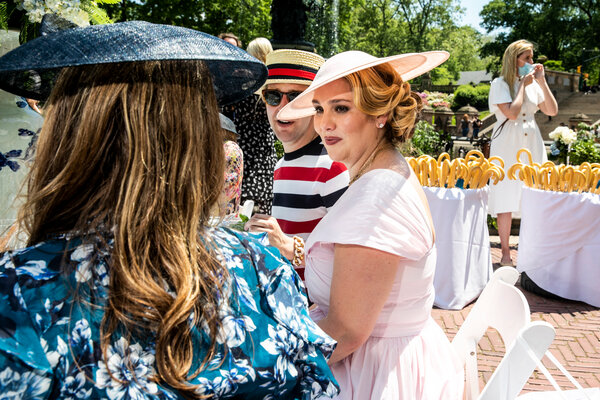 “This is a coming-out party for all of us, great excuse to put on real shoes and makeup,” said Coco Kopelman, a philanthropist married to Arie L. Kopelman, the former president of Chanel. She wore a beribboned straw hat, a kinetically patterned black-and-bone colored dress, and block heel spectator pumps. “I felt like an alien walking through the streets of New York, because we’ve all been used to wearing leggings, dark colors and sneakers. This is a real awakening.”

Jamee Gregory, a writer and New York social figure, was also a little off balance. She wore a flowery Oscar de la Renta dress she had bought just before lockdown. “After all this pandemic eating, I wasn’t sure it was going to fit, but it did,” she said.

The unseasonably warm two-day affair offered a preview of a vibrantly colorful summer ahead.

Michael R. Bloomberg, who was seated in the Conservatory Garden on Wednesday, pronounced the park “one of the great jewels of the city.” He nodded toward Betsy Smith, president of the Central Park Conservancy and host of the affair, and said, “Betsy is the one who arranged the weather.”

Marisa Noel Brown, a social fixture, topped her midriff-baring peasant top and multitiered skirt with a flying disk of a hat crowned in roses and covered in canary-tone feathers. She had plucked the roses from her son’s first communion the day before. A friend provided the plumage. “We worked with a glue gun,” Ms. Brown said, “and the rest is history.”

For others the event marked a return to some semblance of normality. Lauren Santo Domingo, the fashion entrepreneur, crisp, though relatively muted, in a straw boater and square-neck white Valentino dress, was elated. “The main conversation around our table now,” she said, “is that New York is back.”