The Promise of a Really Great Passport Photo

Many recently closed borders around the world are suddenly cracking opening, and the sort of people who love to cross them for pleasure are ready. The number of travelers passing through American security checkpoints each day is now closer to the booming days of 2019 than it is to the little trickle that was being patted down and scanned a year ago.

This means that many folks are gazing at the expiration dates of their dusty passports for the first time in a while, and perhaps finding an unpleasant surprise: It is time for renewal. Noooo!

All photos are fraught, but the passport photo — an image through which you interact with authorities, borders and your own citizenship — is especially electric. It is also generally, and notoriously, unflattering.

Rimowa, the very expensive German luggage brand currently owned by the French luxury group LVMH, promises to change all that — for free. A new sign in the window of the Prince Street store in SoHo will invite you to what it describes as an “elevated” and “reimagined passport photography experience.” No appointment necessary! 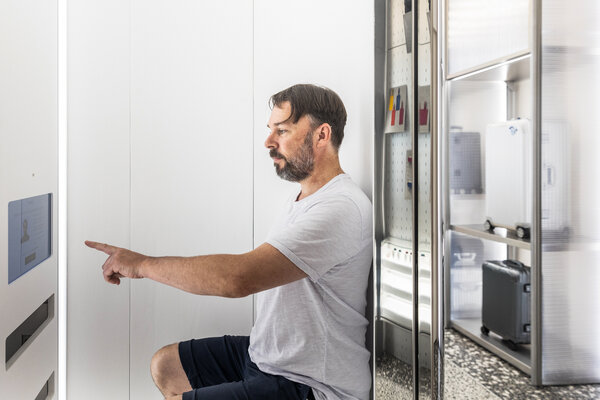 Inside, help yourself to the photo booth hidden just behind a lone metallic pillar. Please, New Yorkers and tourists, do not use this rare and tiny hideaway for sex, drugs or defecation.

If you slide around that metallic pillar into the elegant little white capsule of a photo booth, you will be face to face with a screen that indicates where your eyes (and, of course, the friend of your eyes, the skull) should be. You have a countdown from 10 to compose yourself.

The cubicle is small and bathed in white, shadow-free light. It will blast away any imperfections, washing you in a cold German ambience: a real bargain Juergen Teller experience.

The “photograph” (technically, this may be a representation of a photograph? A machine-assisted selfie?) will be shown to you on a screen. You may retake it as many times as you wish until you are satisfied or begin to hate yourself.

Then you may print it out, and have it emailed to yourself.

Why would this expensive retail real estate full of equally expensive suitcases make this gift to you? Perhaps because, in availing yourself of the offering, you are also potentially opting into the Rimowa email marketing ecosystem. And perhaps because, if you feel pretty and sophisticated enough now, later, when time and fortune have smiled upon you and on your business and/or marriage prospects, you too will be ready for a rolling trunk that costs $1,710.

If you stop to browse, you’ll notice that Rimowa luggage is identifiable by its distinctive ridges, like a Ruffles Sour Cream & Onion flavor chip. While traditionally tugged by people wearing cashmere or dead animals, now it is more likely to be toted by folks who look fairly normal except they have buffed skin and Lanvin sneakers, themselves notable for how chicly ugly and inexplicably costly they are.

(Of course, if the Rimowa case is the 2018 transparent Virgil Abloh collab, which is truly wonderful, it is more likely to be toted by folks who don’t mind that passers-by see all of their shoes, at least the ones they had chosen to pack.)

“You’re traveling soon and your passport is expired and you have to go and take a photo. I think that’s a very unpleasant experience,” Emelie De Vitis, the chief marketing officer for Rimowa, said. “No matter what country you’re based in.” Hence the photo booth, to ease you on your journey.

First, though, some warnings:

You should know that the current United States government (it’s still going!) warns that standard processing of passports may take three months; for $60, you can expedite the service, receiving it in a mere four to six weeks.

Do not delay. You will not be alone. In its 2020 fiscal year, the State Department “earned and retained” $3.7 billion from “new user fee revenue” from passports and visas, granting nearly 12 million passports and passport cards. A big government indeed.

Also this photo is truly tailored to American uses. Different countries have different requirements. British passport photos must also include your upper body; India insists on both ears — and you may not grin or frown or raise your eyebrows in the photo.

Speaking of your face, you should also be warned not to get to wacky in the Rimowa photo booth. As opposed to the 50 shades of Rihanna’s Fenty soft matte long-wear foundation, another fine LVMH associated product, your facial palette of expressions here is limited.

Rimowa might warn visitors that a face in an American passport photo must convey “a neutral expression or natural smile,” according to the U.S. government.

Once you start wondering if your smile is “natural,” you may be in for a bad time.

For instance, if you know what the term “masking” means (it is the term of art, popular particularly among some people with autism, for the act of portraying expected or socially sanctioned behavior), you may leave the booth in a bit of a crisis.

In 2018 the State Department tweeted a supposedly helpful photo as an example. However, the photo depicted a man with an expression so difficult to classify that no two people in 20 would describe it the same way. After some study, we might say he is smizing or otherwise smiling with his eyes while actually doing something more grumpy, even summoning disdain, with the lower half of his face.

Anyway! After some struggle with the artifice of my own identity, I chose not to smile at all. After careful perusal of my picture, it seemed to me my frown lines had mostly disappeared. I look youthful, pale, like a flattering computer-generated portrait of an aging hipster. It would look perfectly fine when flashed upon arrival in Leipzig, Germany.