Home » Beauty and Fashion » The Wedding I Never Thought Would Happen

The Wedding I Never Thought Would Happen

I was at my gynecologist’s office. “At 39, I’m scared I’ll never get married or have kids,” I told him.

“Think about freezing your eggs,” he said. My eyes went wide. It was 2009, when egg-freezing was “experimental” and felt like science fiction.

Walking out of his office, I was filled with regret. I was a 4-foot-10, 180-pound woman who’d started dating at 35, still a virgin. How could I ever catch up?

I worried my problems with men were caused by my father’s traumatic suicide when I was 17, on the eve of Yom Kippur. My mom, Marcelle, was a Holocaust survivor, and I was their only child. After my dad died, my mom and I had an unspoken pact to take care of each other. But we danced around my father’s ghost, rarely talking about him. Feeling unlovable, I escaped into work as a VH1 reality TV producer of dating shows revolving around other people finding love but never me.

After a lonely Thanksgiving in Tokyo filming a Mariah Carey documentary, I decided it was time to change. Yet I had the romantic wisdom of a 16 year old, “Like A Virgin” my theme song. Normal events to other women, like radio silence after dates, sent me into a tailspin, hitting my abandonment button. I would look at pictures of myself, searching for what was wrong. Why didn’t men like me? I had barely been kissed. But I kept going: trying therapy, speed dating and even a dreaded Fourth of July “Fireworks of Love” singles cruise.

At 37, I met a man with kind eyes and a great laugh. Then I found whips, chains and a pink feather under his bed. Could it be his Halloween costume, I naïvely wondered. The relationship lasted longer than it should have, but at least he had made me feel like I mattered. However, I was more “When Harry Met Sally” than “50 Shades of Grey.” 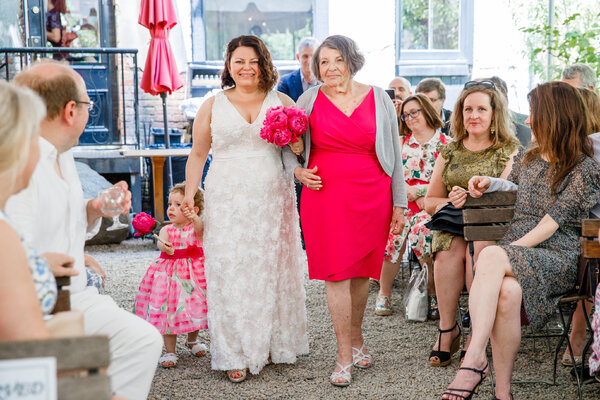 Shortly before turning 40, I used my savings to freeze my eggs. It preserved my dreams of having a family while I played dating catch-up. I had just about given up hope on finding a partner when I met George Talbot, 46, a handsome, 6-foot-3, software engineer and self-described “professional nerd.” He took my hand while talking about our favorite '80s videos, his Van Halen’s “Jump” to my Duran Duran’s “Hungry Like the Wolf.”

“I’d love to take you out on my motorcycle,” George said, as we stood up to leave hours later. I barely reached his chest, even in heels.

“I’m a lifelong pedestrian, what rhymes with never?” I said. We both laughed.

I felt comfortable and grounded with George. Instead of faking it or waiting for the “right moment,” I was honest about what I wanted: a serious relationship. A month later, laying in bed, I confessed to George how I’d frozen my eggs, something I had never admitted to any man.

“What a beautiful story of love and hope,” he said, cradling me.

Seventeen months later, I returned to the same fertility room I’d visited long ago. Waiting there with George as my thawed eggs met his sperm was surprisingly the most romantic day of my life. Soon after, sitting on the Brooklyn Bridge promenade, George proposed, holding my grandmother’s wartime engagement ring.

Like a reality competition show, every week we’d get a report on how many healthy embryos survived the delicate fertility process. The final call revealed: only one. That very long shot became our daughter, Colette.

Why aren’t you married yet?” asked my 86-year-old cousin Marcia the following year. I told her I had all I wanted with George and Colette. But did I? Marcia was right, it was time for me to update what I thought about myself. When Marcia suddenly passed away, I knew I didn’t want to wait any longer.

“I’d like to officially be your wife,” I admitted to George, curling up next to him on the couch. It was four years after our first date.

“What kind of wedding would you like?” he asked.

“I want my mom and Colette to walk me down the aisle to you,” I told him.

As a TV producer, the most important thing was knowing who was the star. For this production, it wasn’t me or George. It was our almost two-year-old daughter. The wedding was built around her: an 11:30 a.m. ceremony in the precious hour before nap time on a Sunday, when our sitter was free. All we needed was a place that was affordable and strollable, so she could take Colette home after her turn as flower girl.

“What about Frankies?” George asked. The iconic Brooklyn Italian restaurant, Frankies 457 Spuntino, near our home was a favorite. During my single years, I had walked past Frankies after bad dates, peering into its intimate garden weddings, wondering what it was like to be the bride. At 48, I finally would be.

On the morning of June 30, 2019, I held Colette’s hand with my right hand, and my 88-year-old mom’s on my left. I’d never had empathy for my younger self. But in that moment, I sent her all the love I could for taking risks and giving the future me a chance.

As we walked down the garden aisle, I saw all the faces we loved. My friend Liza gave a thumbs up. She’d talked me through my first date years ago, and then jumped up and down when we found my score of a $120 flowered wedding gown, just like “Say Yes to the Dress.” Then, there was our guest of honor, Dr. James A. Grifo of NYU Langone Medical Center, the fertility doctor who helped give us our beautiful daughter. And, of course, my incredible mom, who kissed both my cheeks as I placed Colette in her lap. Mostly, I saw George, with tears in his eyes and a huge smile, waiting for me under the hot pink and orange-flowered huppah.

Justice Alan Marrus, a retired Brooklyn acting Supreme Court justice, married us. He had the gravitas of someone who’d put away criminals, but the humor to create a ceremony that told the story of our first online date. My friends, who spent 15 years as my collective “love coach,” proudly high-fived each other as George and I said “I do,” and then kissed.

We all howled at the photo embedded on our Carvel wedding cake, a symbol of life’s unexpected twists and turns. “It’s the only time I ever rode on George’s motorcycle, wearing my bicycle helmet around the block at 10 miles an hour, screaming my head off,” I said as George bowed, raising his glass.

Not even a reality TV veteran like me could have envisioned such a fairy-tale ending. I had come a long way from the days of producing “Why Am I Still Single?!”

Danielle Gelfand is a TV producer. She is also working on her memoir entitled, “Unfrozen.”