They Crossed Paths at Howard but Caught Feelings in a Hurricane

Jaime Oliva stepped out of an Uber and into harm’s way. Mr. Oliva, 30, a senior adviser for strategic management at the Department of Health and Human Services, was returning to his Washington office and looking razor sharp after visiting his barber in July 2017.

He had tickets that evening to a John Legend concert that he planned to attend with his longtime partner, Edward Williams, a senior associate at the law firm WilmerHale, and an adjunct professor and co-director of the Howard University Civil Rights Clinic.

“After taking a few short steps, I heard loud screeching,” said Mr. Oliva, who did not see a red S.U.V. speeding in his direction, but heard the sound of its driver slamming on the brakes just before hitting Mr. Oliva.

He stumbled after getting hit, though never lost his footing and was spared any serious injury. He was slightly bruised and shaking, though, when he tried to call Mr. Williams, who was nearby in a chambers meeting with Judge Patricia A. Millett, who he was clerking for at the time, at the United States Court of Appeals for the District of Columbia Circuit.

(At the time, Mr. Oliva’s office and Mr. Williams’s office were minutes apart, across from each other at the National Mall.)

His calls unanswered, Mr. Oliva somehow managed to type the words “Hit by car,” in a text message to Mr. Williams, who read it, before listening to Mr. Oliva’s voice messages, then burst from the courthouse, running down the street until he got to Mr. Oliva, whom he quickly embraced. 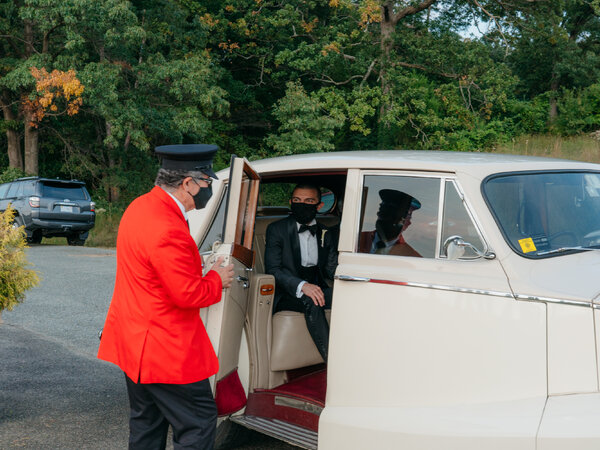 “I arrived to find Jaime physically and emotionally shaken,” Mr. Williams said. “After dealing with the police report and getting him to calm down, I was concerned for his well-being, and I also asked what he wanted to do about the concert.”

The very first meeting between Mr. Oliva and Mr. Williams, at Howard University in the 2008-2009 academic year, when Mr. Oliva was a freshman and Mr. Williams a senior, was far less dramatic, and even less memorable, according to both men. Neither had any romantic interest in the other at that time.

They did not truly begin to notice each other until 2012, when Mr. Williams was a second-year law student at the Georgetown University Law Center in Washington, and Mr. Oliva was working as a paralegal at the Federal Trade Commission satellite office nearby.

But Mr. Oliva persisted, peppering Mr. Williams with jolting comments like, “You know you are going to be my boyfriend, right?”

When Hurricane Sandy appeared on his radar in October 2012, Mr. Williams decided to host a “Hurricane Party” on the Sunday before the actual storm. During the party, he received a call from a close friend who needed a ride to his home, so he drove to her apartment complex in Hyattsville, Md.

As Mr. Williams waited for his friend to come downstairs, he was stunned to see Mr. Oliva emerge from one of the buildings in search of the pizza deliveryman, who had just called to announce his arrival.

But with no deliveryman in sight, Mr. Oliva, in the mood for a little fun, approached Mr. Williams, who was slumped against his car, and having gone to chapel earlier in the day, dressed in a full suit.

“Hey,” he said to Mr. Williams, “are you the pizza delivery guy.”

Mr. Williams wasn’t amused. “I’m thinking to myself that I had been bumping into this guy for a few months, and he’s asked me out many times,” he said. “Now here I am in a full suit, he couldn’t possibly think I’m the pizza guy.”

Mr. Williams eventually met his friend and they drove back to Washington, where, for the first time, Mr. Williams began seeing Mr. Oliva through romantic eyes. “I thought to myself, here’s this really attractive guy who is incredibly persistent,” he said. ‘His resilience was one of the things I admired about him most.”

Later that evening, Mr. Williams texted Mr. Oliva to ask if he was still interested in going on a date, and Mr. Oliva responded with a resounding “yes.”

“What really struck me that day was how Edward talked about family values, and how close he is with his friends,” Mr. Oliva said. ‘He’s someone who is always selfless, who is always going to give his time to family and friends.”

They arranged for a first date the following weekend at Matchbox, a local pizza shop in Washington’s Chinatown neighborhood, and there they talked about family, future goals and hurricanes past.

Mr. Oliva grew up in Belle Glade, Fla., a city that fiercely prepares for hurricanes in order to protect its agricultural fields of sugar cane and other crops. His parents immigrated from Mexico before he was born and met each other in South Florida. His father is a welder with A. Duda & Sons, his mother a stay-at-home-parent.

Mr. Williams, a son of Coy Williams and Edward Williams Sr., grew up in Savannah, Ga., where the threat of a hurricane seemed to arise every few years and from where he recalled evacuating at least once for a hurricane that never struck the city. His father is a human resources manager at Vic’s on the River, a restaurant in Savannah. His mother, now retired, worked in various roles at what is now a patient registrar at Memorial Health University Hospital, the same hospital where Mr. Williams was born.

A week after becoming a couple in December 2012, Mr. Oliva and Mr. Williams took a trip to the United States National Arboretum in Washington. They took a photo sitting at a bench alongside a cliff overlooking the Anacostia River. This photo, they said, was emblematic of their relationship: “reflective, solid, and united,” as Mr. Williams put it.

In June 2019, they returned to that very spot, recreating the bench photo, this time with the many trees in the Asian Collection garden in full bloom, and took some time to soak in nature. Together, they reflected on how their relationship had blossomed over the previous six and a half years.

“Edward helped me process the emotions of the unknown, which for me, can be very stressful,” Mr. Oliva said.

Ten months later, they returned to the National Arboretum in Washington yet again, this time to get married.

Though they had originally planned to wed on April 4 at the United States Institute of Peace, the ongoing Covid-19 pandemic forced them to postpone their wedding and ultimately to change venues.

So they chose the United States National Arboretum, returning to the place that has been central in their relationship since the beginning, and married there on Oct. 4, before Judge Patricia Millett, a friend and mentor to Mr. Williams, and 44 guests.

At the reception, the newlyweds, who will use the surname Oliva-Williams, danced their first dance to John Legend’s version of Meghan Trainor’s “Like I’m Gonna Lose You,” a song they took comfort in three years earlier at Mr. Legend’s concert at the Merriweather Post Pavilion in Columbia, Md., the same day that Mr. Oliva was hit by a car.

During the song, which Mr. Williams refers to as “our song,” the couple held hands, and they began to cry during their favorite part of the song “which makes it our song,” said Mr. Williams, his voice beginning to crack.

“So I’m gonna love you like I’m gonna lose you,” Mr. Legend sang, “I’m gonna hold you like I’m saying goodbye. Wherever we’re standing, I won’t take you for granted, ‘cause we’ll never know when, when we’ll run out of time.”

The Guests There was an eclectic mix of notable guests in attendance, including Judge Millett and retired Chief Judge Richard W. Roberts of the U.S. District Court for the District of Columbia, as well as the actors Jeffrey Rashad Pugh and Brandon Gill, and Carlos Battey, the Grammy Award-winning singer/songwriter known as Jackie’s Boy.