When COVID-19 began to devastate Italy earlier this year, ultramarathoner Alyssa Clark admits that she thought that being prohibited from running or walking outside seemed like a distant thought.

“The Italian government took fast and necessary measures to keep the rest of the country safe and shut down the whole country,” the 27-year-old—who is originally from Bennington, Vermont, but was living in Italy at the time—told Runner’s World. “We went from being able to travel, run, [and] walk freely, to being confined to our homes and only able to travel to and from work, the grocery store, or hospital. We had to carry papers with us to justify our movements, and [we] could and were often stopped by police.”

Then, Clark started getting notifications that the races she had signed up for that spring and summer were all being canceled.

“I felt very prepared to compete, so I needed something to test the fitness I had developed,” she said. “I tossed around a few ideas with my coach, including running the Quarantine Backyard Ultra, completing a 24-hour treadmill run, and completing a 48-hour treadmill run. Somewhat out of the blue, I mentioned to my husband, What would you think about me running a marathon everyday until we’re allowed to run outside?”

On March 30, Clark’s goal was set, and she began running daily marathons the next day.

“We were supposed to have some restrictions lifted [in Italy] on April 14, so I thought I would do about fifteen marathons,” she said. “When it was extended to May 1, the game was on. … In all honesty, there are a lot of benefits to the treadmill. In many ways it is easier to run indoors. The temperature is controlled, there’s no wind or elements to take into consideration, no need to carry water or food with you and a bathroom available at all times.”

She completed 30 treadmill marathons before restrictions slowly began to lift across Italy. At that point, Clark announced that she was going to chase the world record for most consecutive days of running a marathon—despite the fact that she and her husband were going to be moving back to the U.S. soon.

On one of her first runs back outside, the ultrarunner hit one of her hardest days both physically and mentally, which resulted in her slowest marathon time to date—4:43.

“There happened to be a dust storm that was blowing off the northern part of Africa and hitting us,” she said. “It was about 85-90 degrees out and it felt like I was breathing through a cheesecloth. We also lived in a very hilly area in Italy, so the hills felt even harder in the weather and on fatigued legs. I just remember feeling like every mile took an hour to finish, and I was very drained from the effort.”

On the day of marathon No. 57, Clark, alongside her husband Navy Lt. Codi Clark, began their multi-day move from Naples, Italy, to their next duty station in Florida, making stops in Germany; Virginia Beach, Virginia; and Charleston, South Carolina, along the way. The travel logistics alone threatened to get in the way of Clark’s challenge—but she persevered, and completed her marathons during this time.

“The most challenging aspect of the transition was the sleep deprivation and general fatigue of traveling,” she said. “In Germany, we didn’t arrive until 10 p.m., and we had to be back at the terminal at 9:30 a.m. or would risk not being allowed on our flight. Codi was a trooper and ran to the only place open at that time which was a gas station, to grab some frozen meals, and I didn’t end up going to bed until almost 11 p.m. The plan was to start at 2:30 a.m. to make sure I finished the marathon on time, but I ended up waking up at 12:45 a.m. and decided I would start.

“It was very strange to be running a marathon at one in the morning around an Air Force base in Germany, but it is truly a memory I will never forget. I even had a local Air Force runner join me at 4:15 a.m., which was incredible to have the company and so greatly appreciated.”

And it was in Charleston that Clark surpassed the unofficial women’s world record for consecutive days running a marathon distance at 61 days. To celebrate the milestone, her husband called up her family via Zoom, so they could see her finish the marathon, and a friend brought a bottle of champagne to spray at the end. 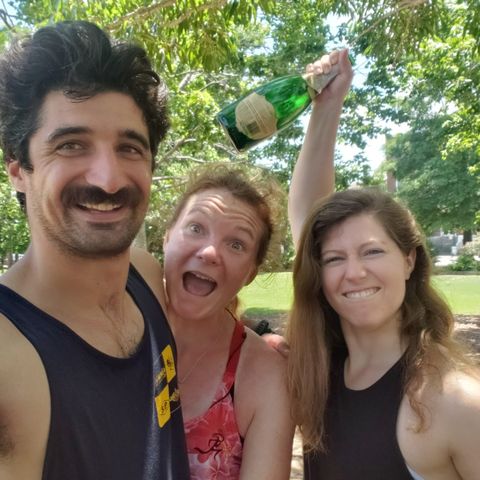 “I felt like I was absolutely flying the whole day, and it was a pretty fast marathon, too,” she shared. “I had quite a few friends [from previous military stations] out so I had someone running or biking with me for all but a couple miles. I also have only been to Charleston once, so it was incredibly exciting to see a new and beautiful place.”

Clark, who runs her marathons between a 9:20- and 9:40-per-mile pace, shared that although she sometimes maps out 26.2 for a specific route, there is a certain joy in ‘just going out to explore.’ And though her scenery changes, her routine stays the same no matter where she is.

“One of the most important parts is setting my clothes out the night before and making sure my running pack is ready for the morning,” she said, adding that she likes to make it as easy as possible to get out the door in the morning. “I have my water bottles filled, my food in the pockets, and all watches and headphones charged.”

When running, Clark usually wears a tank top, and she rotates between four different pairs of shorts. After getting dressed, she brushes her teeth, uses the bathroom, slathers on sunscreen, and takes Imodium. “Maybe TMI, but runners are gross,” she joked.

Clark then puts on her compression calf sleeves (she’s a big fan of XOSkin) and shoes. She also carries two watches with her to make sure her data is correct, and so she doesn’t risk losing the information.

“[All] this normally takes me about 45 minutes before I’m out the door,” said Clark, who also carries two watches with her to make sure her data is correct, and so she doesn’t risk losing the information. “I break the marathon into parts, and try to celebrate each part of it, and I also try to avoid looking at my watch for the first two hours or so to concentrate on enjoying my time and not being upset if the miles aren’t moving as quickly as they can.”

Clark has remained motivated through her own inner persistence and by the support from around the world.

“I have never really given myself an out,” she said. “Everyday I know I am going to go out and continue to work until the marathon is done. I take a lot of motivation from hearing about others being inspired by my marathons. That has been incredibly motivating for me to continue and is the extra little voice that helps me when I am tired or having a tough day.”

At the time of publish, Clark had surpassed 85 consecutive days having run a marathon—and she’s aiming for 100. It’s an impressive feat alone, but add in a global pandemic and an international move, and it’s inspiration personified.

From: Runner’s World US