Triathlons Helped This Dad Bond With His Sons With Autism

My wife, Julie, and I both love exercising and racing triathlons, but when we started bringing our young sons to fun runs—hoping to share with them the passion for sport—it was a nightmare. Both boys are severely autistic, and I don’t apologize for saying that, because it’s a wide spectrum. Our oldest, Christian, is nonverbal. Jake speaks only a few words. The social and sensory aspects of the races overwhelmed them. Jake would throw hellacious tantrums. They’d scream, bite their fingers, kick stuff, break things. People stared; it was tough.

But I could also tell that they wanted to exercise. Plus, it was important for them to do so in order to develop physically and manage their health, especially Jake, who has type 1 diabetes.

So we started slow and together. Safety always came first. I’d run to the end of the street with Jake, and my wife would walk with Christian. It was a struggle for the first five years or so. We had to watch and listen carefully. Jake showed more desire to exert himself, while Christian needed more encouragement. I realized it was less about my times in races and more about spending time together. Gradually we established a routine and they became our training partners. 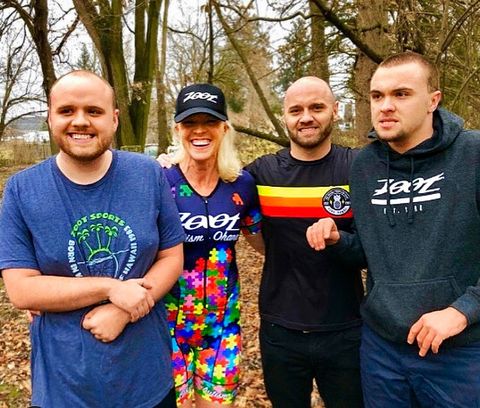 For instance, Jake took to running and swimming, but getting him on a tandem bike was hard. He was nervous and afraid to even sit on a bike. So I started playing music on my phone—he likes pop, but I prefer rock and country—and that helped him stay calm as we rode around the block. Now we do 35-mile rides on the tandem and I’m a stronger rider than ever because I’m powering him. Tandems are not meant to go fast! Jake, now 21, did his first sprint triathlon in 2017, and Christian, 25, has lost 40 pounds over the past few years and is training for a marathon.

The days we exercise together are just better, and the boys are calmer and more in the moment and sleep much better. Both boys now take pride in progress, their self-esteem is growing, and they’re becoming more independent. That’s a big deal for special-needs kids and parents, because you always worry about who will look after your kids if you’re not around.

It’s really reinvigorated my fitness, because I see them grinding through challenges and it inspires me to push my limits, too. The other day, I was at the YMCA gym strength-training with Jake, and sometimes he shouts or grunts or drops the weight and we’ll get that stink-eye look from other people. I used to obsess about what other people thought of us, but now I don’t care (as long as he’s not breaking anything). I’m proud of my family and what we’re doing together, because it’s changing the narrative of what autistic people can and should do.

Case in point: I did a sprint triathlon with Jake in Florida in December 2020. The swim was 750 yards, his longest yet. On the bike ride, he was slapping me and shouting, “Go, go, go!” My thighs were screaming. You could see the joy on his face, and he was high-fiving people at the finish line. I said, “You nailed it, buddy,” and he gave me a fist bump, which was pretty cool.

But my happiest moment of the weekend was the day before at the 5K fun run. We don’t normally all run together, because Jake is fiery and fast and Christian more relaxed and plodding. Jake ran slower and held Christian’s hand the whole way, and they were smiling the whole way. —as told to Ben Court

This story appears in the June 2021 issue of Men’s Health with the title Force of Will Is an Unsung Power.