Home » When the Only Sure Descriptor of Jewelry Is Love

When the Only Sure Descriptor of Jewelry Is Love

When Aryeh Enoch was buying an engagement ring for Charissa Fajardo last fall, he was confident that she would love his selection: an 18-karat yellow gold band adorned with two skulls, a 1.72-carat diamond mounted between the backs of their ornately sculpted platinum heads.

The ring, which Mr. Enoch purchased for about $20,000 from the jeweler Anthony Lent in Midtown Manhattan, matched Ms. Fajardo’s other accessories. The bride, who is known as Charlie, has 14 pierces in her ears and one in her septum.

“It does feel like a more authentic extension of self than a lot of jewelry that I’ve come across,” Mr. Enoch, 25, said, “and I know Charlie felt the same way.”

Ms. Fajardo, who also is 25, did agree — and described her personal style as “the intersection of bohemian and very edgy.” 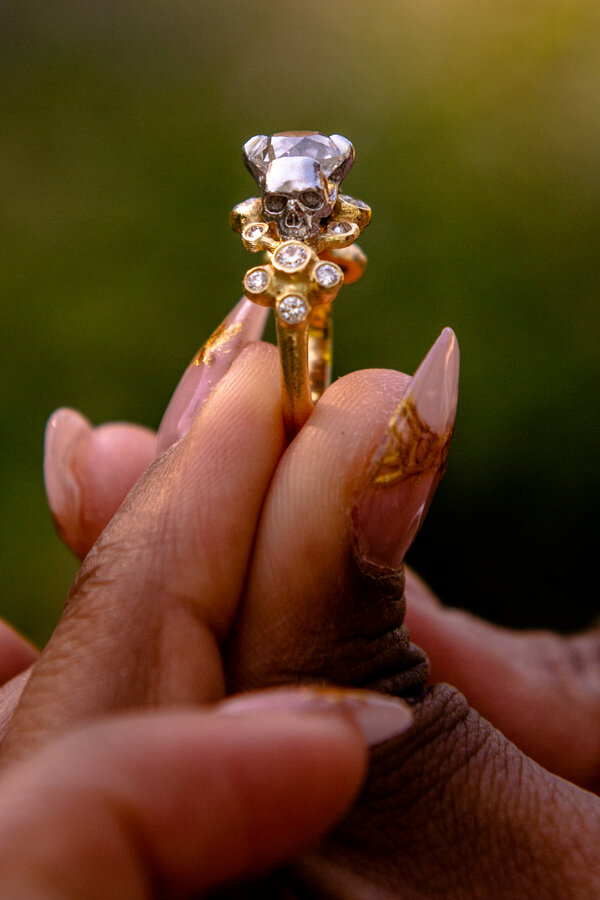 “Consumers want to put their own mark on things and not to conform to what everyone’s doing, or to have that Cartier ring that so-and-so has, or the Tiffany engagement ring, or whatever it is,” said Fflur Roberts, the head of luxury goods at the market research firm Euromonitor. “They want their own thing.”

The range of rings along these lines is vast — and expanding.

This month, for example, Tiffany & Co. introduced its first line of men’s engagement rings. Available in three styles — and featuring what it labeled the Charles Tiffany setting, in honor of its founder — a one-carat diamond set in a thick platinum band, for example, retails for $15,600.

A men’s engagement ring with the Charles Tiffany setting.

Independent designers are also caught up in the trend. Last month Pamela Love, a jeweler based in New York whose designs are sold at retailers like Neiman Marcus, added a bridal collection, inspired in part by the custom commitment rings she had been making for clients. Options include a diamond set into a rugged gold band patterned with an intentionally irregular braid over about half its surface. One iteration, with a 3.22-carat diamond, is $45,000.

Other brands — in part, like Ms. Love, to accommodate an inclusive environment for same-sex unions and civil partnerships — label their offerings “commitment” or “couple’s rings.”

The French brand Djula offers bands with detailing in white gold and diamonds designed to resemble barbed wire, as well as styles that feature two widely spaced bands connected by sleek gold bars. It has quirky takes on diamond engagement rings, too. And next week, as part of a new square-themed collection, it plans to introduce a twist on the classic engagement solitaire: a band with several small diamonds mounted in a boxy diamond-encrusted frame.

Tomfoolery London, a British boutique that sells contemporary jewelry by designers like Maria Tash and Nora Kogan, has an annual “Alt. Bride” promotion. And Polly Wales’s confetti rings — bands with a smattering of embedded sapphires — are best sellers.

Similarly, the Paris-based JEM brand finds demand for bold architectural bands like the ones in its Octogone collection.

Much like the rest of the global economy, 2020 was a challenging year for the wedding industry. In the United States, revenue from wedding services, a category that includes everything from bridal venues to jewelry, declined by 34.2 percent compared with 2019 totals, according to a recent report by the market researchers IBISWorld. And although this year the company is forecasting an overall rebound of about 11 percent, to $51.2 billion, the segment that includes wedding jewelry and apparel is still expected to total slightly less than it did five years ago.

The shift toward personalized rings actually began before the pandemic, especially among millennials and Generation Z couples. But lockdowns and small ceremonies accelerated the change, Ms. Roberts of Euromonitor said. And although rules regarding gatherings have begun to ease in some places — weddings in England, for example, now allow up to 30 guests — many weddings are smaller than they might have been a few years ago, and are likely to remain so.

“I think what lockdown has done is just opened brides’ and grooms’ minds to, actually, weddings don’t have to be traditional,” said Hollie Harding, a buyer who oversees the selection for the London retailer Browns in several categories, including jewelry and accessories. “They can be what you want them to be.”

Early last year, Browns added a range of fashion-forward bridal options, many of which were not designed specifically as bridal wear but could be worn that way. Along with the white minidresses and lime green leather mules were jewelry like Spinelli Kilcollin’s cluster of bands, bound together with small loops. That brand, based in Los Angeles, offers many options; one variation, with a diamond-pavé ring in the mix, retails for about $5,000.

Engagement rings, in particular, have been moving beyond the traditional, with some couples choosing signets. Rachel Entwistle, in the London neighborhood of Shoreditch, sells custom versions, detailed with black diamonds or sapphires. Browns has them, too, from brands like Foundrae and Yvonne Léon. And Twist, a retailer with stores in Seattle and Portland, Ore., sells a slender matte-finish gold signet with a half-carat diamond by the Tokyo-based jeweler Shihara ($7,220).

Eternity bands, frequently in bright colors, are another engagement option. Last year, Suzanne Kalan, a Los Angeles jeweler whose designs are carried by retailers like Harrods and Dover Street Market, introduced the Princess Bold collection that included chunky emeralds or sapphires arranged in a jagged circle.

She also offers bridal options adorned with black quartz or black spinel, and next month intends to introduce a capsule collection of black sapphire pieces on Net-a-Porter. The pieces are ideal, as she put it, “for the person who’s really not traditional, who’s really edgy.”

Ms. Kalan added that, over the past year or so, she has noticed that styles like a $2,500 eternity band with boxy princess-cut emeralds have been purchased in large sizes, to be worn by men as engagement rings — so she now is working on a black sapphire collection for men.

Other designers hope their rings have universal appeal, too. As Ms. Love said, “I try not to think about my designs with regards to gender. So it could be for anyone, whatever people identify themselves as.”