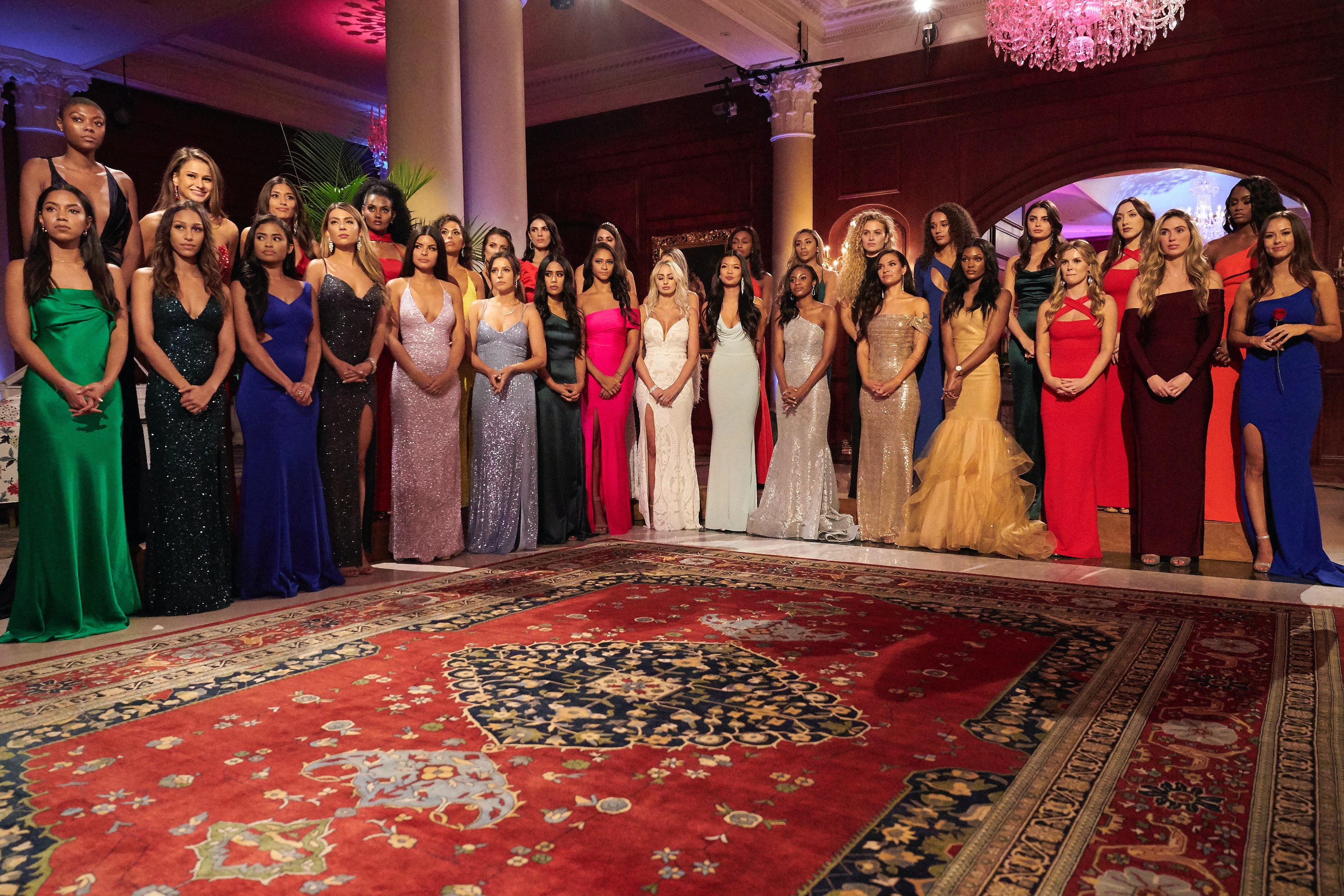 Whether you’re looking for love or fame, The Bachelor franchise continues to call to singles year after year. While it seems like everyone who steps out of a limo gets a million Instagram followers and brand collab deals after the show, there are a lot of things contestants have to consider before agreeing to go on dates on national television. These facts about the set of The Bachelor might make you think twice about accepting any roses in the near future.

It doesn’t matter if you’re a hater or a longtime member of Bachelor Nation: Everyone knows being on the show comes with some serious perks. Not only is there a chance you’ll find the love of your life, but with overnight fame, you’ll also be in a much better position to chase your dreams and have your future endeavors flourish. That said, the road to getting cast is a long, strange one that might not be for everyone.

From dating someone who might not actually know your name to being around producers who convince you to kiss your co-star to agreeing to be secretly recorded, being on the show is a big commitment. Here are a few things to consider before trading your 9-5 in for some heels and social media attention:

1. The Lead Doesn’t Have To Know Everyone’s Names

If you ever wondered how the lead manages to remember everyone’s name (especially early on), the answer is: They don’t. According to the Season 6 Bachelorette, Ali Fedotowsky, the person passing out the roses "goes into the rose ceremony room and says a few names at a time and then leaves to get the next few names." Former Bachelorette contestant Chris Randone also said this about Becca Kufrin’s Season 14, so it sounds like that tradition is still being upheld.

2. Producers Tell People When To Kiss

During an April 18 interview on Us Weekly‘s Here for the Right Reasons podcast, former Bachelor Peter Weber admitted the producers sometimes pushed for him to kiss contestants at certain times.

"Producers, if they think it’s a good time to kiss, they’ll … tap their fingers or have their phone that says, ‘Kiss,’" Weber said.

3. Contestants Have To Do Their Own Glam

If you’re cast on the show, you’d better work on your contouring skills, because contestants have to be their own glam team. In June 2018, Season 17 winner Catherine Giudici-Lowe told Allure that while stylists and makeup artists are provided for contestants during the premiere and finale episodes, the contestants have to DIY it the rest of the season.

4. Vibrators Are A Big ‘Paradise’ Must 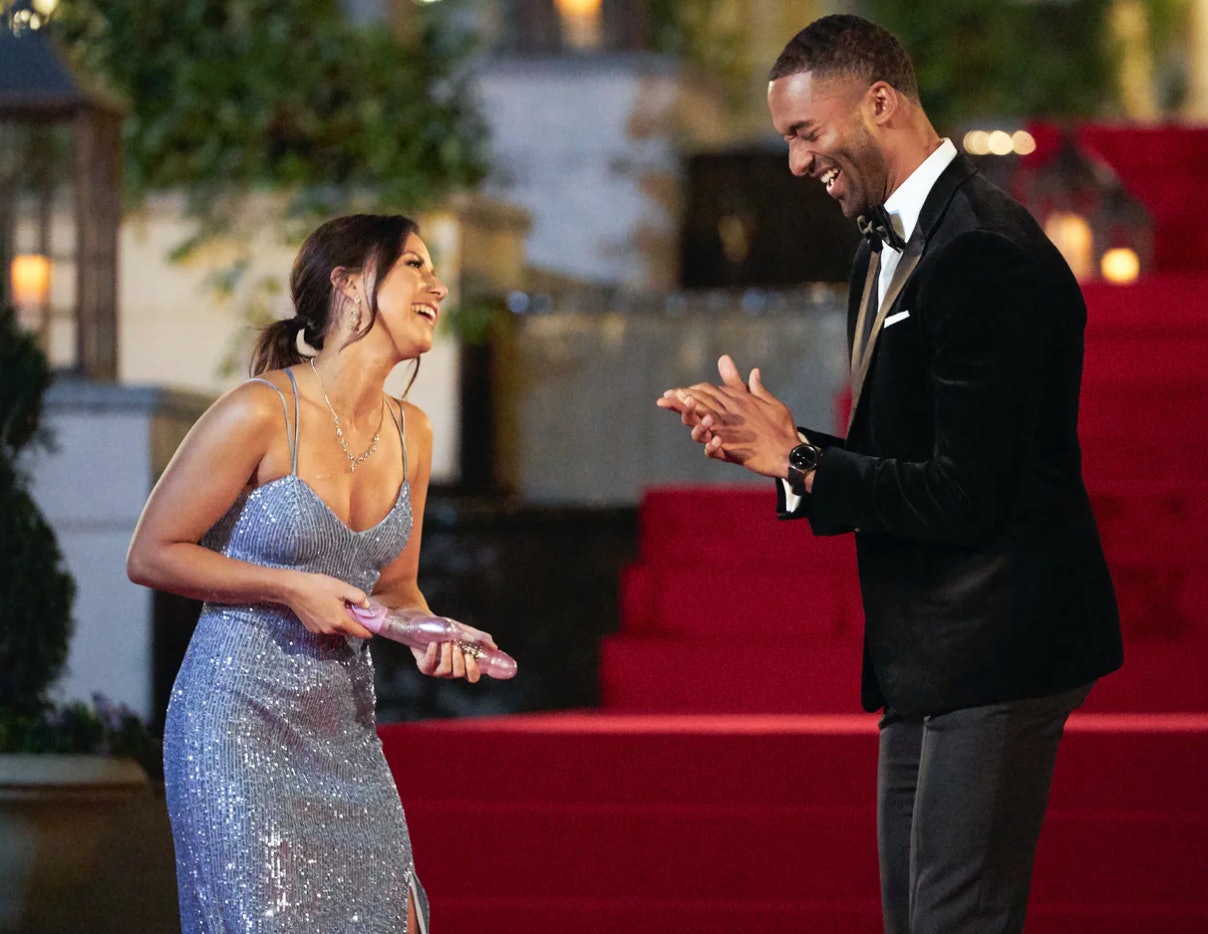 5. People Often Cry In The Bathroom

Courtney Robertson from The Bachelor Season 16 shared in her book, I Didn’t Come Here To Make Friends, that since contestants are being filmed and recorded 24/7, they would go to the bathroom to cry so they could avoid having their tears shown on screen.

6. The Winner Doesn’t Spend A Lot Of Time With The Lead

In July 2015, Fedotowsky told Women’s Health the lead doesn’t actually spend much time with the winner. “You spend so little time with the person you choose before the final rose ceremony," she said. "I would say you probably spend about 72 hours tops with the person you wind up choosing, and 12 of that is spent ‘sleeping’ in the fantasy suite. You can’t really get to know a person in that time frame.”

Back in 2013, Season 4 Bachelorette constant Jesse Csincsak said the final four is picked on Night 1. "If you were in a room with 25 guys for 10 hours, you could totally pick four guys to travel with for the next two months to get to know better," he said. "So, out of the final 13, nine of them will actually be sent home by producers, and the actual real eliminations start at the final four."

Then, in 2015, he told OK! Magazine that the producers play a big role in how things go down that first night. "Producers orchestrate the entire thing," Csincsak said. "Sitting contestants down with the star, then directing others to kick them out. Then they tell the lead, ‘Pick four people you would like to get to know better.’" 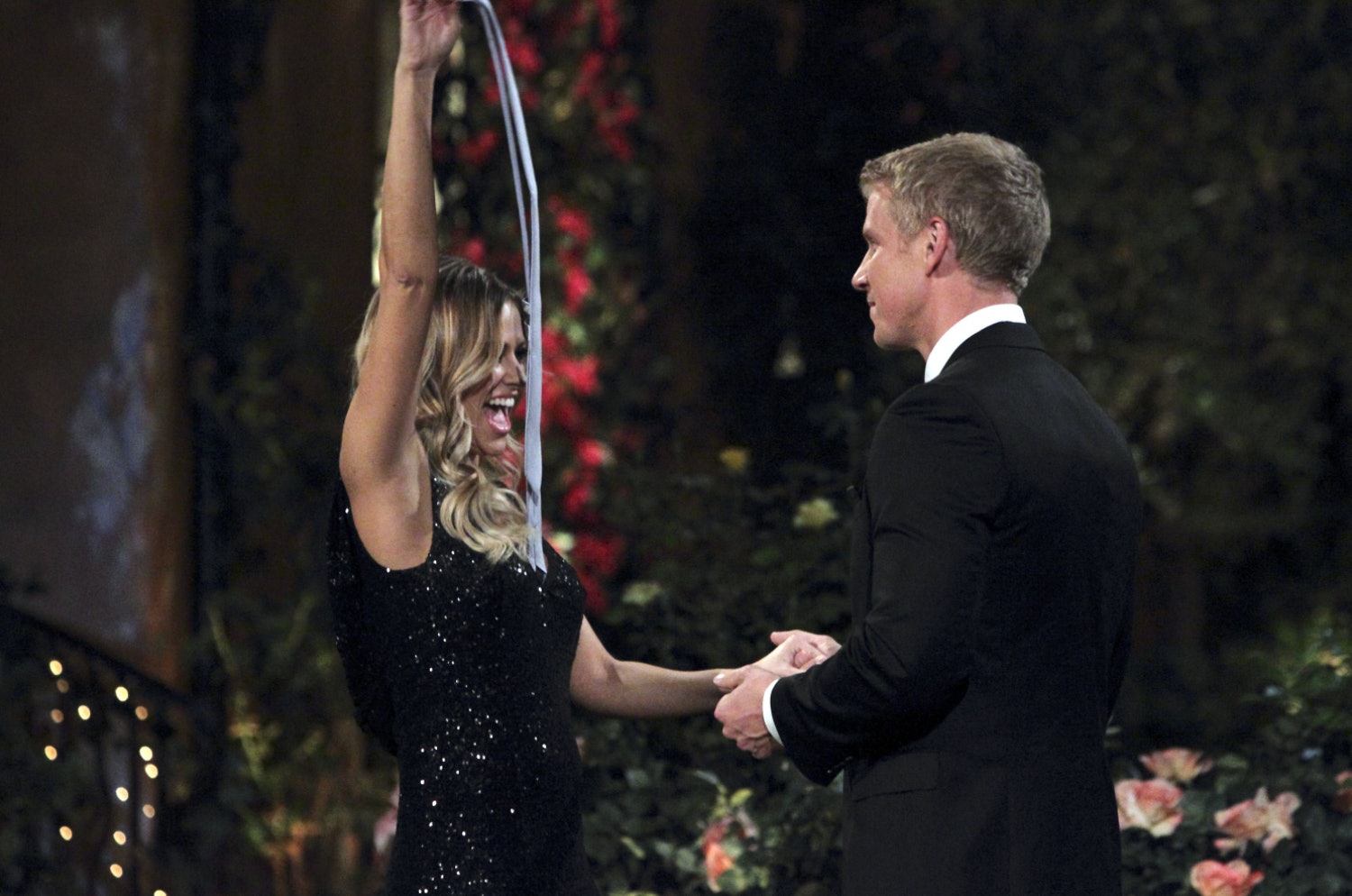 In addition to the final few contestants being picked on Night 1, a lot of thought goes into the limo entrance order. "I remember one of the producers said to me, ‘You are going to be the first one out of the limo.’ I didn’t think much of it," Sean Lowe told Glamour in 2015. The producer then explained, "’Because you are first, everyone here thinks you are going to do well.’ They want to get the show started off on the right foot."

Sarah Gertrude, a former Bachelor producer, told The New Yorker in 2016 that her job involved giving contestants bad advice. She’d also get them to open up and spend most of the night chatting so they’d be sleep deprived and emotional.

Regardless of whether or not a season happens during the coronavirus pandemic, a lot of times, hometown visits aren’t actually filmed in the families’ homes. In 2016, former Bachelor contestant and Bachelorette lead Andi Dorfman told Huffpost that while some contestants film in their parents’ real homes, others borrow a relative’s house or even have production rent out a place to portray that perfect, All-American vibe.

11. Contestants Get Tested A Lot

There are a lot of hoops potential contestants have to jump through before walking out of their Bachelor limos. According to Insider, candidates have to not only spill the tea on any dirt the producers dig up about them, but they also often have to undergo psychological evaluations and STD tests. In fact, STDs are often the reason people don’t get cast. "Sometimes you’d be the first person to tell a contestant they had herpes," former producer Ben Hatt told Bachelor Nation author Amy Kaufman

12. The Villain Gets To Stay For Ratings (At Least Sometimes) 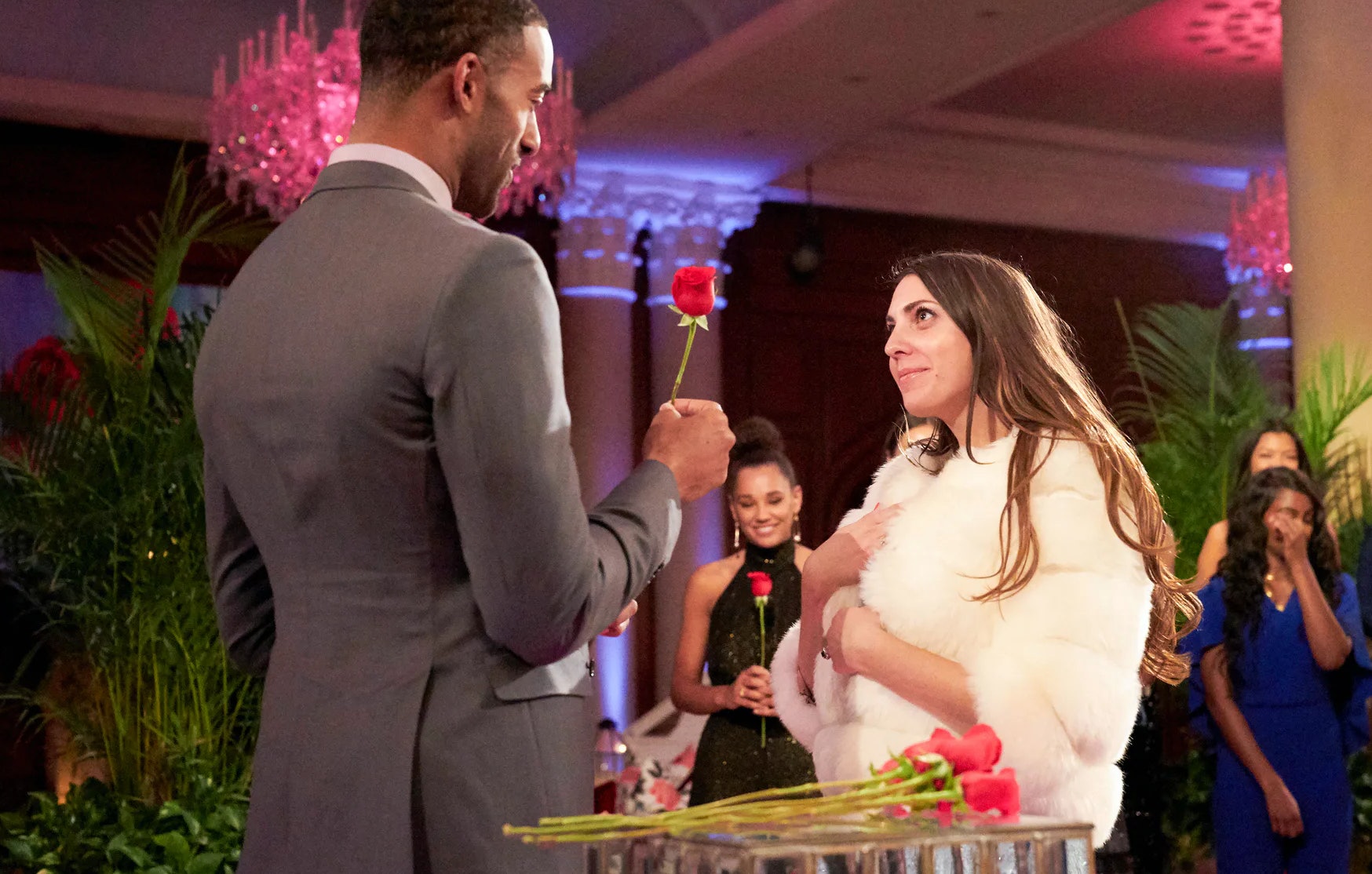 Each season, fans debate whether or not the series villain is kept on the show for ratings, and according to the Season 8 Bachelorette, Emily Maynard, that’s totally the case. In her book, I Said Yes: My Story of Heartbreak, Redemption, and True Love, Maynard admitted she kept her season’s villain, Kalon McMahon, around to boost ratings. She wrote: "Can you imagine how boring the show would be if I only kept the nice guys around the whole time?"

Despite the gourmet spreads fans see, Sean Lowe told Glamour in 2015 that nobody actually eats the food during the dates. "That’s primarily because nobody wants to watch you eat and the mics will pick up the chewing," he said. "So between the two date portions, they would bring us to a hotel, where you can shower and change and get ready — and it’s during that time that you can eat."

14. There’s No Chef In The Bachelor Mansion

Despite living in a mansion, contestants aren’t treated to a mansion lifestyle. Instead of an in-house chef, everyone has to fend for themselves food-wise. “We were responsible for making all of our meals in the house,” Season 11 Bachelor contestant Ashley Spivey told Refinery29 in 2017. “Dinner would be prepared by whoever felt like cooking for everyone.”

If you manage to pass all the tests and are offered a spot on the cast list, you gotta sign a pretty intense contract. According to a report by The New York Post in 2018, contestants should have “no expectation of privacy" and have to agree to be filmed all day, every day. They also have to agree to the use of "hidden cameras and microphones."

But wait, it gets worse! Contestants must also be “prepared for anything” including “twists” and “surprises" and producers have the right to mislead contestants. According to the Post, the contract states: “Producers or others connected to the show may intentionally or unintentionally make misrepresentations or omissions concerning the Series.”

Finally, a clause of the contract reportedly says: "I UNDERSTAND, ACKNOWLEDGE AND AGREE THAT PRODUCER MAY USE OR REVEAL PERSONAL INFORMATION WHICH MAY BE EMBARRASSING, UNFAVORABLE, SHOCKING, HUMILIATING, DISPARAGING, AND/OR DEROGATORY, MAY SUBJECT ME TO PUBLIC RIDICULE AND/OR CONDEMNATION, AND MAY PORTRAY ME IN A FALSE LIGHT." Yikes.

16. Your Job Isn’t Over After The Final Rose

Not only does the contract cover filming, but it also reportedly plays a big role in contestants’ lives post-production. In the year following your Bachelor or Bachelorette appearance, you have to agree to take part in a “reasonable number” of photo ops and interviews, and for three years you apparently have to agree to take part in special episodes of the show like “After the Final Rose.”

Finally, if you find the love of your life on the show and decide to get married within two years of the show’s airdate, the producers reportedly own the rights to your wedding. If they decide to film and air it, you’ll reportedly get paid $10,000 per hour of televised programming.

For some, a rose-filled journey might be worth it, but be sure to read the fine print before agreeing to all that a cast member’s role entails.