In case you hadn’t heard, Adrianne Curry is giving 100% less f**ks these days.

The model-turned-reality star left Hollywood a couple years ago, moving to Montana with her new hubby and leaving all this celebrity life behind.

However, she did leave one window open into her normal new life: an Instagram page, which she’s using to be completely raw and honest about all aspects of her current and former existence.

Photos: Adrianne Shows Off Her New Curves After Getting Breast Implants Removed

On Tuesday morning she posted a throwback pic from her America’s Next Top Model days, next to one of host Tyra Banks. She then proceeded to unload on why winning that first cycle was less a path to success and more a complete “s**t show” in which she and her fellow contestants — and the audience most of all — were allegedly constantly lied to.

Adrianne has hinted at what a mess the show was before, but never with this much detail. She began:

“Why the fallout? I have addressed this before, but I keep hearing the lies told by others. Many season 1 girls follow me on here and can back me that voice overs were added to our show saying things they never said to us…”

What were the girls told??

“We were led to believe daily the winner would be instantly rich and a huge Revlon cover girl. This was a lie. They added recordings to what was said after the fact. After the show, Revlon informed me It didn’t matter who won, they were never going to have us as a model. I cried at that meeting&they felt bad.”

As well they should have! But it wasn’t just the Revlon contract she says never came:

“They had me sit in a makeup chair in a tiny conference room while 6 people watched a makeup artist put makeup on me for $. Fine. Sure, I was crushed. I believed what I won with all my heart and thought I’d be able to really help my family. That is why I said it at the very end of the show. However, I was offered $$ to sit in that chair, so I was stoked.”

“I never got the money. To this day, I have not been paid.”

Adrianne posted on her blog way back in 2007 complaining she was still waiting on that check. But frankly at the time we kind of assumed she was exaggerating.

But now over a dozen years later she never got paid? How is that possible?? She explained:

“TOP MODEL pointed the finger at Wilhelmina and Wilhelmina pointed the finger at top model. All I wanted was my f**king money. Wilhelmina informed me that top model burned their bridge with them by choosing IMG the next season and dumping them. My own agency hated me. I was told they’d send Elyse everywhere to spite Tyra and that they didn’t care if I booked or not. I hated my agent. I begged top model to help me leave my agency. I didn’t get paid AND I was locked in a contract with an agency THEY pissed off. Crickets.”

She blames this betrayal (and possible fraud?) for her so-called attitude toward the show:

“That is why I got SO mad. I wasn’t waiting for Tyra to do all the work for me. I was waiting for what I was promised every single day for 2 months as I was locked away filming a show and competing. I was waiting for help to break from the agency they pissed off and refused to work w/me because of it. I was stuck in a contract w/people who wanted me to fail, never got paid….it was a s**t show!!! Its like winning the lotto, doing the press, holding that big check up for the cameras AND NEVER GETTING A DIME!”

Dang. No wonder she jumped right into so many other reality TV shows. She needed to pay the rent!

Adrianne got a little backup, too. She tagged some other Cycle 1 girls and got corroboration from Giselle Linette Samson, who wrote:

“I back what she is saying. TOP MODEL was a fraud. And I want to say that first elimination we went through @tyrabanks said to me that ‘I needed to work on humility that I should be more humble otherwise America wasn’t going to like me’ so I started self deprecating myself so I wouldn’t seem so ‘cocky’ and I became the girl with ‘No Confidence’ F–K ANTM!!!”

Adrianne also answered a few questions in the comments, like one asking why she was bringing this all up again now. She wrote:

“Because the show did their propaganda how I immediately transformed into a diva. Expecting all this stuff and not lifting a finger to work or propel myself forward. It made them look good and me like I was some ungrateful asshat.”

She added that “nothing had hurt as bad” as that aspect. Not the jobs, not the money, the perceived damage to her reputation.

Adrianne also admitted she only did Playboy — a bit of a scandal at the time — to piss everyone at ANTM off, saying it was:

Well, that and the money, right??

Thankfully everything worked out for Adrianne in the end, and she can laugh it all off:

“Its all good now. I think it’s pretty f**king crazy and hilarious, honestly. It’s a hell of a story!”

Does it color how YOU look back on all those ANTM cycles? There have been some success stories from the show, but maybe far fewer than if they actually gave what they promised? Hmm… 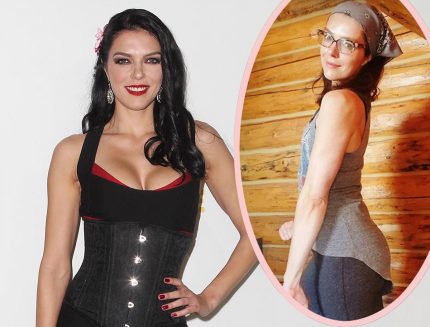