Home » Celebrities » Amanda Kloots Uses Nick Cordero's Ashes To Make Pottery With Their Son – 'A Way To Keep Him Living!'

Amanda Kloots Uses Nick Cordero's Ashes To Make Pottery With Their Son – 'A Way To Keep Him Living!'

The fitness instructor took to her Instagram on Tuesday to share the inventive way she learned to honor her late husband: by making pottery out of his remains!

Captioning a photo of herself and their 1-year-old son Elvis making magic, the 38-year-old wrote:

“Elvis and I had a special afternoon today. My girlfriend from years on Broadway has an incredible pottery business in LA and she invited us to make pottery using some of Nick’s ashes. I have recently learned how many ways you can repurpose ashes and make new things with them. I think it is beyond beautiful, a way to keep him living!”

Kloots shared more moments from the event on her Instagram Stories, showing images of the late Broadway star’s ashes being mixed in with the clay, and of herself and Elvis leaving their hand-prints on the piece. 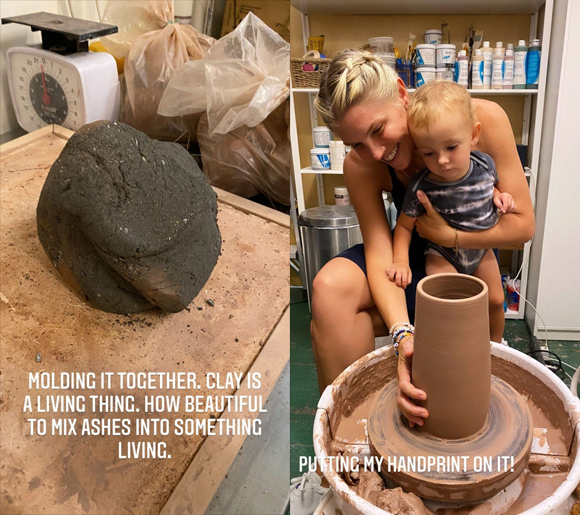 She added in a video:

“Before Nick was cremated I did not know all the things you could do with ashes. It was just so special and really special to do with Elvis. It was a really special way to take something so sad — the day I picked up Nick’s ashes, as you can imagine, I was devastated. I was crying so hard. It was a very emotional day. There was a lot of ashes. It’s something you don’t think about until you have them.”

Kloots previously opened up about how “surreal” it was to retrieve her late hubby’s ashes in a series of posts back in August. She said in her IG Stories at the time:

“It was beyond surreal and horrible. But they’re in my possession and a good friend of mine said some beautiful advice: look at it as you have him with you now. Which is really a nice way of looking at it, which is true… It’s been really hard, some really hard weeks where I’ve literally felt like I can’t even function, where I’m kind of just in a fog where I don’t know what I’m doing or what I’m saying. Thank god for my brother and my sister-in-law because they’ve rescued me and Elvis a lot.”

In addition to her pottery tribute, Kloots already scattered some of Cordero in the Pacific Ocean. She also has plans to use some remains to make special pieces of jewelry to remember her husband — who, as you likely know, died in July at the age of 41 after suffering coronavirus complications.

It’s so great to see Amanda is finding new ways to grieve and heal. Ch-ch-check out her full post (below).

Elvis and I had a special afternoon today. My girlfriend from years on Broadway has an incredible pottery business in LA and she invited us to make pottery using some of Nicks ashes. I have recently learned how many ways you can repurpose ashes and make new things with them. I think it is beyond beautiful, a way to keep him living! ⠀ She had never incorporated ashes to her work before (and doesn’t intend to do more) but because we are friends she wanted to try, to create a piece that Elvis and I could help with and have forever. I had never made pottery so I was really looking forward to learning the process. ⠀ Once she mixed the ashes with the clay, threw and spun our piece, Elvis and I got our hands wet and put our hands into the clay to make our imprints on the piece. It will be a vase! This was so incredible and really felt special. A way to turn something sad into something joyful. ⠀ She now will let it dry and then puts it in the kiln to bake before we glaze it! The process is not over so there will be more to come. I just wanted to share this because I think it’s so beautiful what you can do with ashes to keep someone you love alive. ⠀ Again, this was a one off experiment for her but her pottery is gorgeous so if you are interested in that check her out! @rarebirdgoods ⠀ Thank you so much Emily! ❤️

Related News:
TV and Movies
The truth about Thomas Ravenel’s new fiancee
This is where Alaskan Bush People star Billy Brown was before the fame
Peter Andre's heartache as he's banned from hugging son Junior for two weeks after coronavirus outbreak at school
‘The Disney Holiday Singalong’ Hits High Note To Top Monday Ratings; ‘The Neighborhood’ Ticks Up
Trista Sutter Grateful for Support After Revealing Husband Ryan's Struggle with Mystery Illness: 'This Year Is Hard'
Recent Posts
This website uses cookies to improve your user experience and to provide you with advertisements that are relevant to your interests. By continuing to browse the site you are agreeing to our use of cookies.Ok