After Emily Atack’s mum Kate Robbins’ Twitter account was hacked last night, The Chase’s Anne Hegerty, 61, told the star that she muted her mum’s Twitter account and claimed it was “nothing personal”. The Inbetweeners star asked her Twitter followers if anyone could help her out.

I hope you don’t mind, but I’m muting her.

Emily, 30, who is best known for playing Charlotte Hinchcliffe in comedy series The Inbetweeners, reached out for help to her Twitter followers last night after her mum’s Twitter account was hacked.

“Thanks for letting us know guys. It’s been hacked by a Saudi Arabia driving school which is ironic cos she’s the worst driver on earth. CAN ANYONE HELP?” (sic)

While Kate’s account was being sorted, Emily’s I’m A Celebrity… Get Me Out Of Here! pal Anne admitted that she muted her for the time being. 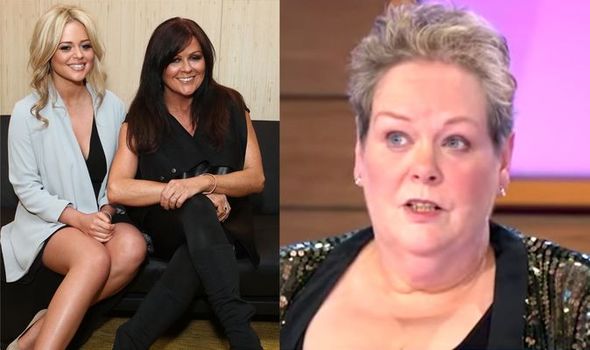 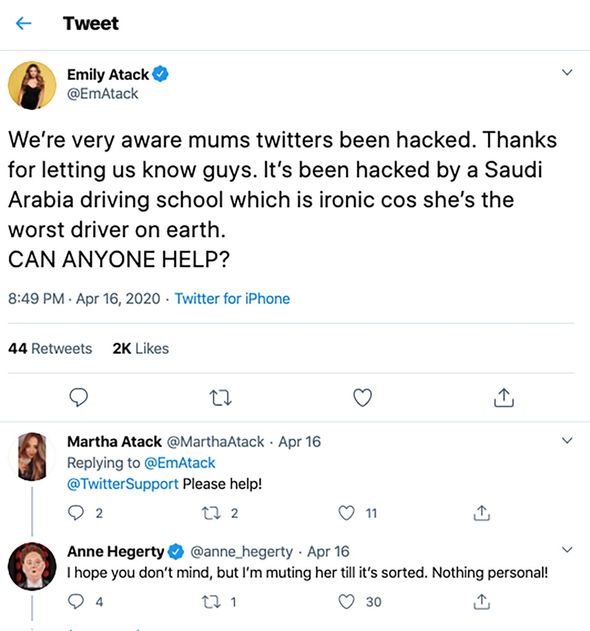 Anne responded to Emily’s tweet as she said: “I hope you don’t mind, but I’m muting her till it’s sorted. Nothing personal!”

Soon after the Chaser posted, followers of the star began to respond to her “ruthless” statement.

One wrote to the I’m A Celeb star: “Ahahahaha! Go on Anne! Rubbing salt into the wounds!,” while another added: “I just unfollowed.”

Others then went on to say how “savage” Anne’s response was.

Once Kate’s account was finally sorted, the comedian wrote to her daughter: “I’m back. But I’m still a rubbish driver.”

Once the More Than In Love singer announced that she was back online, fans began to join in with the conversation between Kate and Emily.

One wrote to the singer-songwriter: “Sorry Em, social distancing means I can’t currently give any driving lessons.”

Kate Robbins rose to fame with her song More Than In Love in the 1980s, and her mother was Beatles star Paul McCartney’s first cousin.

Kate, who was previously married to musician and composer Keith Atack until 2008, also shares their daughter Martha, 27, and son George, who is 26.

On top of being well known for her role in Crossroads and Dinner Ladies, Kate also appeared in political satire show Spitting Image in the late 1980s.

The nation saw Emily and Anne become good pals while taking on Bushtucker Trials on I’m A Celebrity Get Me Out Of Here in 2018.

Meanwhile, Emily has recently spoken out about how she has been coping during the coronavirus outbreak.

The TV star recently told broadcaster Emma Barnett, 35, on BBC Radio 5 Live how she wants “anything but to be on her own” during this difficult time.

She said: “With everything that’s happened, it puts you in a different headspace with it all.

“One second I’m flying the flag for single women and everything’s great … and the next minute all this is happening and I want anything but to be on my own.”

The E4 actress continued to say: “I think at times like this you’ve got to appreciate everything you have, but, you know, I’d give anything to have a row with a husband right now.”