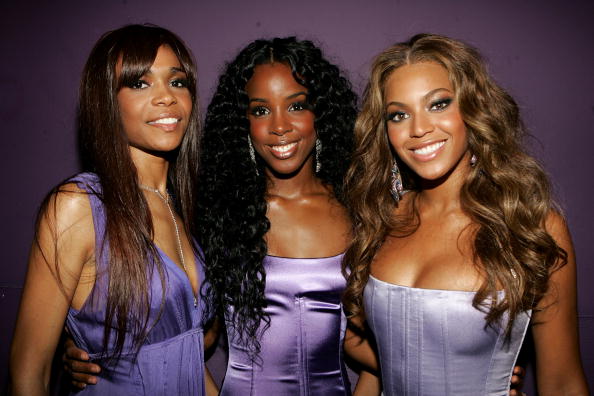 Proving just how close the Destiny’s Child women still are, Kelly Rowland has revealed Beyonce and Michelle Williams watched her give birth on Zoom.

And there we were, thinking the video call service was saved for office meetings and online quizzes circa March 2020.

Kelly, 40, gave birth to her and husband Tim Weatherspoon’s second son, Noah Jon, in January, and made sure that special family members and friends could watch the miracle live.

The Work singer told People (The TV Show!): ‘We had our family join on Zoom. They were able to see Noah come into the world. It was beautiful.’

Among the family tuning in were Beyonce, 39, Michelle, 41, Beyonce’s mother Tina Knowles, and Weatherspoon’s mother.

Kelly, who is also mum to six-year-old Titan Jewell, added: ‘They met him immediately.’

The star previously heaped praise on her besties, calling their bond ‘a gift’.

Speaking to Entertainment Tonight, Kelly said: ‘The girls were literally over here at the house just recently and when they met the baby, it was like another part of my heart just … being able to share space with Michelle and Bey is truly a gift.

‘And I’m just so grateful for them and they are a highlight of my life. Not professionally, but our friendship and our sisterhood — you’re going to make me cry.’

Destiny’s Child were formed back in 1990, with Beyonce, Kelly, LaTavia Roberson and LeToya Luckett forming the first line-up.

Michelle joined in 2000 along with Farrah Franklin, with the pair replacing LaTavia and LeToya, and after Farrah’s exit, the trio went on to have the band’s most successful era with songs like Independent Women, Survivor, Bootylicious and Lose My Breath.

With Beyonce off becoming an international solo superstar, Destiny’s Child officially disbanded in 2006, but the girls have remained extremely close, and have given us reason to hope for a reunion over the years.

At Beyonce’s Super Bowl halftime show in 2013, Kelly and Michelle popped out of the floor to perform alongside their bandmate, while they also joined Beyonce at Coachella – or Beychella – in 2018.

Beyonce and Kelly also lended their vocals to Michelle’s 2014 song Say Yes, marking their first recorded collaboration since their disbandment.