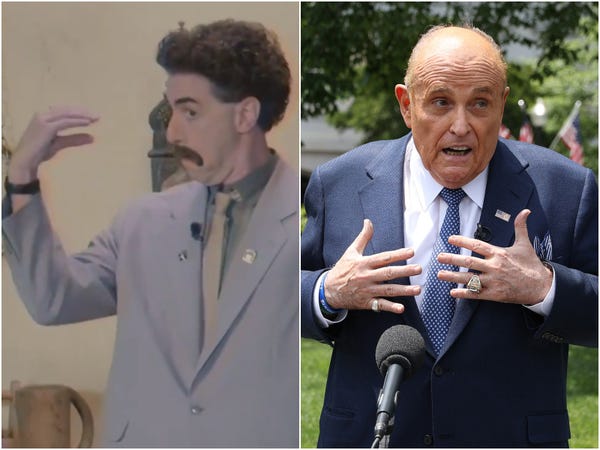 In "Borat 2," Giuliani was duped into a fake interview with Tutar. Giuliani then went with Tutar to her hotel room for a drink at which point Borat bursts in and says: "She is 15. She is too old for you."

In the hotel room, rigged with camera and microphones, Giuliani could be seen lying down on the bed with his hands near his crotch. Former New York City Mayor Giuliani tweeted that he was "tucking in [his] shirt."

Borat himself has now tweeted a response himself — a video titled "OFFICIAL STATEMENT FROM BORAT SAGDIYEV."

In it, Cohen dressed as Borat said: "I here to defend America's Mayor, Rudolph Giuliani. What was an innocent sexy-time encounter between a consenting man and my 15-year-old daughter has been turned into something disgusting by fake news media."

Borat continued: "I warn you. Anyone else try this and Rudolph will not hesitate to reach into his legal briefs and whip out his su-penis."

Giuliani's statement regarding the footage read: "The Borat video is a complete fabrication. I was tucking in my shirt after taking off the recording equipment."

He continued: "At no time before, during, or after the interview was I ever inappropriate. If Sacha Baron Cohen implies otherwise he is a stone-cold liar."