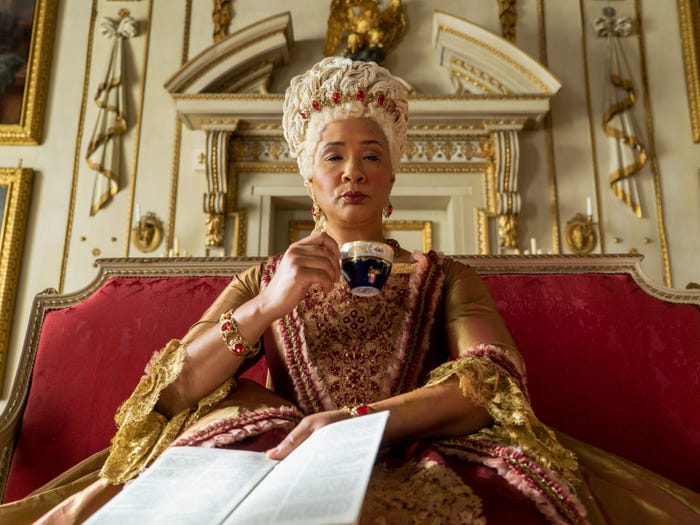 Despite experts' reports that she descended from a Black branch of the Portuguese monarchy, her royal highness has previously been portrayed onscreen by white actresses, such as Janet Dale and Helen Mirren.

"Bridgerton," a glitzy new Netflix series, created by Chris Van Dusen and produced by Shonda Rhimes, takes a different approach. Instead of ignoring Charlotte's African roots, the series embraces them.

Van Dusen dreams up an early 19th century England in which Charlotte (Golda Rosheuvel) uses her powerful position to demand equality for people of color.

Because King George III (James Fleet) loves her, he replaces Regency England's racial hierarchy with a more inclusive society, all thanks to his beloved wife.

In the "Bridgerton" universe, Charlotte's entrance into the royal family opens doors for people of color to hold titles as dukes, duchesses, earls, lords, and ladies.

After playing the catalyst for sweeping change in the new series, Rosheuvel remarked how "clever" it was to show a Black woman in such an influential position.

"Putting that person at the top of the triangle, as a person of color, allows you to expand the boundaries," she explained.

"The possibility for Black characters to love, to be passionate, to be seen in high status," Rosheuvel continued, "you allow all that space to happen if you have somebody, who was ruling the country as a person of color."

In recent years, many period piece films and television series have faced scrutiny for revolving around all-white characters.

Homogeneous casting may be an attempt to accurately represent certain time periods' segregated class systems, or it could be a result of a lack of diversity in writers' rooms, Rosheuvel noted.

"For a long time, people of privilege have been in charge of the storylines and storytelling. I don't know whether they have intentionally written out Black people, because we know that there were Black people and people of color," she said of that time period, arguing that more diversity in the genre is "long overdue."

Rosheuvel, a self-proclaimed fan of "Downton Abbey" (a television series that didn't introduce a single Black character until its fourth season), doesn't look down on past historical dramas, even if she didn't see characters that looked like her.

"Those period dramas have paved the way," she said. "I wouldn't knock them because they have allowed us to be in a position where we can bang down the door, and [they've] given us a platform to go, 'No more,' in the best possible way — with love."

By hunting down Lady Whistledown, working through a complex marriage, and dutifully ruling over her subjects on season one of "Bridgerton," Rosheuvel hopes to create a more inclusive, diverse space in the genre.

"People want to see themselves reflected," she told Insider. "I think we do that in 'Bridgerton.' 112%."