Receiving many congratulations for their wedding-like post, the ‘Bachelor’ host and his girlfriend clarify that they simply attended a friend’s nuptials.

AceShowbiz –Chris Harrison and Lauren Zima have set the record straight on the buzzing speculations about them tying the knot. Having received many congratulations from friends and fans alike after the “The Bachelor” host shared a wedding-themed photo, the two were quick to shut down the rumors.

The twosome, who have been dating since 2019, sparked the wedding rumors when the 49-year-old TV host shared an Instagram post of him kissing Lauren sweetly. In the black-and-white photo posted Tuesday, April 27, he looked dapper in a plaid suit, while his 33-year-old girlfriend was dressed elegantly in a floor-length gown.

Along with the post, the ABC host wrote a romantic caption that further fueled the speculations. “I’d stop the world and melt with you” @laurenzima,” he wrote, quoting Modern English’s “I Melt With You”. He then continued, “There’s no one I’d rather celebrate love with and I’ll be your plus one anytime.”

Assuming the couple have gotten hitched from the post, their fans and friends jumped in to congratulate them. A number of “The Bachelor” stars could be seen happy for the pair. Jojo Fletcher left a comment that read, “YESSSS!” Ashley Iaconetti added, “WAAAHHHHH!! Congratulations!!!! I was literally just thinking of you two 20 minutes before opening up IG and seeing this! The love vibes are radiating across the country.”

In the meantime, Tanner Tolbert questioned Chris’ relationship status as he chimed in, “So… Are you married or not?” He got the answer when Lauren poured cold water to the wedding buzz. In the comment section of Chris’ post, she clarified that they had simply attended a friend’s wedding. “Love you so much and appreciate all the ‘congrats’! This bridesmaids dress is really living above its potential,” she noted. 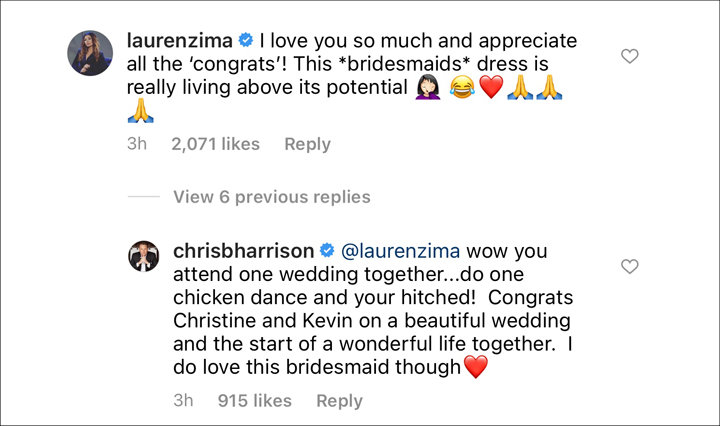 Chris and Lauren shut down the marriage speculation in the comment section.

Also shutting down the ongoing rumors was Chris himself. Responding to Lauren’s clarification, he joked, “Wow you attend one wedding together…do one chicken dance and your hitched!” He went on to offer a warm congratulations to his newlywed friends, “Congrats Christine and Kevin on a beautiful wedding and the start of a wonderful life together. I do love this bridesmaid though [love].”