Home » Celebrities » #Confirmed: Adele Is Officially in a Relationship With British Rapper Skepta

#Confirmed: Adele Is Officially in a Relationship With British Rapper Skepta

Adele is pretty much on top of the world right now. After hosting Saturday Night Live last weekend, she was praised for delivering a ridiculously funny performance and was thrust back into the spotlight once again for being an all-around amazing celeb to be a fan of. Now, Adele is in the press yet again, but not for her acting chops—this time, it has everything to do with her dating life!

According to People, Adele is officially dating British rapper Sketpa. A source of their says that things between them “have been heating up,” and added that “they run in the same circles in London, and she’s having fun.” Love that for her!

If something about this sounds familiar to you, it’s because Adele and Skepta were rumored to be dating for quite a while now. The first reports of them spending time together romantically popped up in October of last year (aka a lifetime ago) when The Sun reported they had been on a few dates with each other.

“Adele and Skepta have been there for each other a lot after both their relationships split up. They have a close bond and there’s definitely a special connection,” The Sun’s source said at the time. “Some of their friends are hoping and predicting they could end up being a great couple one day.”

And then this happened: 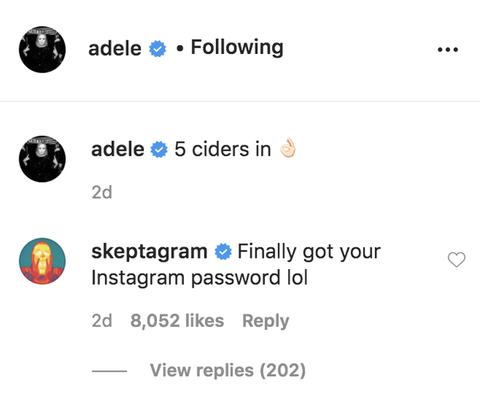 To which Adele responded to with a winky-face and red heart emoji. So now we know that was definitely flirting and an indication that things were indeed going on between them! Now if you’ll excuse me, I’ll be not-so patiently waiting for them to go IG official.