Dan Walker, 43, let his feelings known after reports surfaced that three people had been “seriously hurt” over the weekend from cliff jumping in Dorset. The nice weather has seen people gathering in public areas such as beaches and parks as the coronavirus lockdown has been eased.

What on earth is happening? Let’s not lose our heads

BBC said that Dorset Police had responded to safety concerns of people who were jumping off the cliff at Durdle Door into the sea on Saturday.

Durdle Door is a well-known beauty spot near Lulworth, which was inundated with visitors during the recent hot weather as the lockdown measures were relaxed.

After the incidents, the beach and cliffs were evacuated and those injured were taken to hospital via helicopter, but the extent of their injuries is not yet known.

Taking to Twitter, Dan could not believe what he was reading

“What on earth is happening?” he wrote, bewildered. 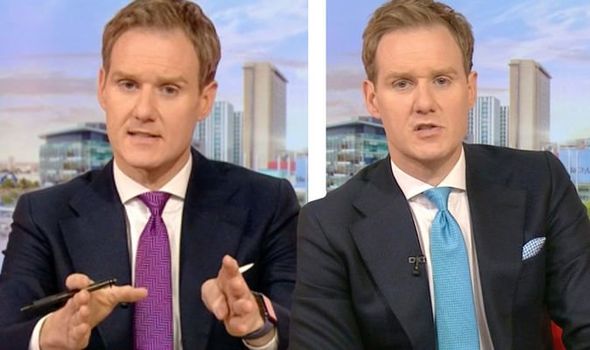 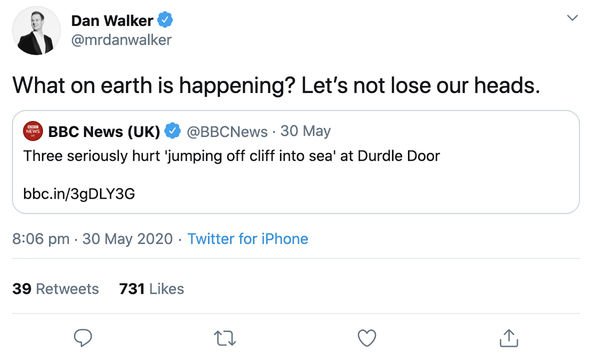 “Let’s not lose our heads.”

His comments sparked others to share their views, with one warning: “It’s the classic ‘Because we can, we will’. Why, people? What is wrong with everyone? Crazy behaviour. Just stay at home, or close to home. That virus is still out there!”

A second mocked: “Let’s go to the beach and jump of cliffs in the middle of a pandemic, sensible and British people using good old common sense.”

A third admitted: “I’m sticking to the original lockdown guidance personally…I am terrified of a second wave but it seems many aren’t or are in denial..”

But while the rules of lockdown are slowly being relaxed as England sets off down the Prime Minister’s road to recovery, there are certain elements that are still a strict no-no.

Dan was down in the dumps as many have been since their holidays were cancelled due to the ongoing pandemic. 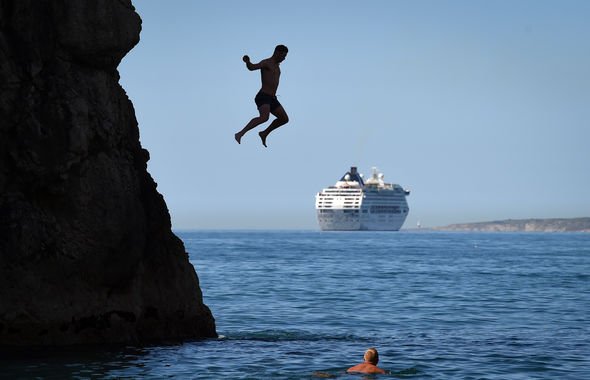 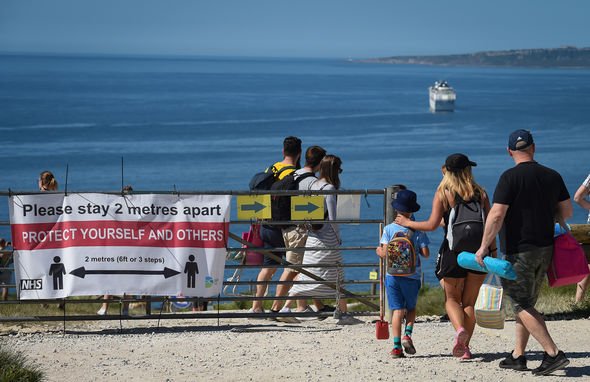 The BBC Breakfast host was a missing from the show on Monday after having booked the whole week off to take his family to Cornwall, plans which have since fallen through as the UK lockdown continues.

Instead, he was replaced by Jon Kay who appeared alongside Louise Minchin.

Dan tweeted ahead of Monday’s show to give viewers a heads up that he won’t be there.

“I’m not on #BBCBreakfast this week,” he admitted.

“We were meant to be on holiday in Cornwall.”

But he let fans know the show will be jam-packed with details of lockdown changes, school openings and coverage of the US protests in honour of George Floyd.

Viewers took to the comments section to rub his nose in the fact he was missing the beautiful sunny weather in the idyllic south-west coastline.

“If it’s any consolation Dan, it’s really horrible here at the moment!! Its a hard life living here…” one joked alongside a stunning photo of the cliffs.

Another said: “I live in Cornwall… shall I send you a cream tea?”

Others urged him to enjoy time off with his family during these uncertain times.

“Have a nice holiday in your garden Dan (just pretend). It’ll be fine…just turn the social media off!!!” someone advised.

A second said: “Sorry your holiday not happening. Hope you and the family do something refreshing Dan!”

A third chimed in with a Dominic Cummings joke: “Take a drive to Cornwall to test your eyes, it’s allowed,” they mocked.