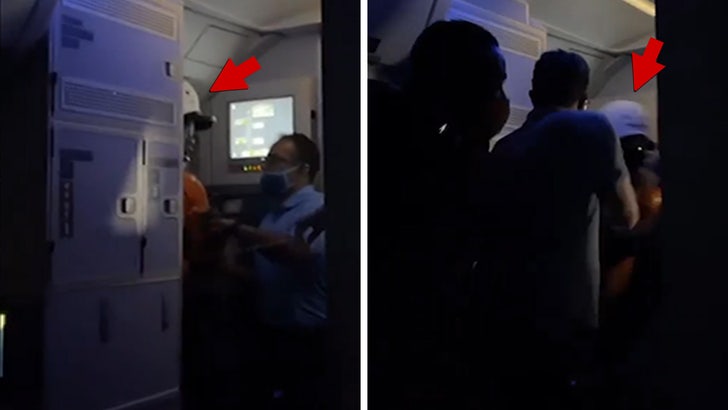 Normies riding passenger aboard a Delta flight from L.A. to Atlanta received a Bat-signal of sorts from the crew while up in the air … help us detain this idiot up front, please.

This wild encounter went down Friday on a plane that left LAX and was on its way to ATL … which had to reroute for an emergency landing in OKC because some guy — reportedly an off-duty flight attendant, no less — tried opening some of the emergency exit doors.

Unclear what set him off … but suddenly, other attendants and crew members were scuffling with him up near the cockpit area — and they needed backup to get him under control.

Different passengers claim someone came over the loudspeaker and asked for any able-bodied men to come to the front for immediate assistance … and it looks like at least two fellas answered the call for help, as they were seen pulling the man down in regular clothes.

Eventually, once they were on the ground, the authorities got involved … and the suspect, ID’d as Stephon Duncan, was arrested for making terroristic threats, among other charges.

The crazy thing about this — besides the nature of what happened in general — is that this is at LEAST the second such attempted takedown encounter that’s happened on a Delta flight in recent weeks … another one occurred sometime last week, also leaving from LAX.

One of the flight attendants — who was decked out in a dapper uniform — did most of the heavy lifting in that case … where some dumbass tried rushing the cockpit doors. They got him in zip-ties and hauled him to the back until they could land safely. Freaky stuff, really.

The one question that must be asked — where the hell are those air marshals we know and love (and apparently desperately need in 2021)???