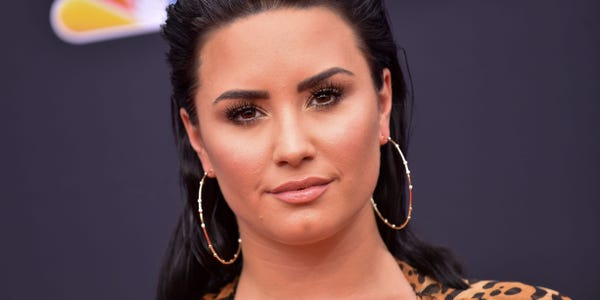 Demi Lovato recalled how watching the 1999 film "Cruel Intentions" when she was younger was one of the first occasions where she realized she identified as queer.

The "I Love Me" singer spoke about the moment with "Queer Eye" star Tan France during Facebook Watch's "Coming Out 2020," a special that premiered on Friday. In the special, France asks Lovato when she realized she was queer.

"It was definitely when I was young and should not have been watching 'Cruel Intentions,' but I did, and it was that scene where they made out on the park lawn," Lovato said.

The scene from the 1999 film features Sarah Michelle Gellar's character, Kathryn Merteuil, teaching Cecile Caldwell, played by Selma Blair, how to kiss in a park.

Lovato also shared that she watched the film again when she was around 17, which is when she realized she was queer.

She added that she came out in three "phases," first telling her friends, then her family, and then the public.

"I pretty much told all of my friends and my older sister when I was 17. They all knew before I brought it to my parents and then the public," Lovato said.

Lovato and France host the "Coming Out 2020" special, which features LGBTQ actors, allies, and entertainers sharing and celebrating their stories about identity and acceptance. It is currently available to stream on Facebook Watch.

In January, Lovato told Andy Cohen on his SiriusXM show "Radio Andy" that she came out to her parents in 2017.

"I didn't officially tell my parents that I saw myself ending up possibly with a woman too until 2017. It was actually emotional, but really beautiful," she previously told Cohen.

She told Cohen that her dad already knew she was queer from the lyrics of her song "Cool For The Summer."

Lovato also said in "Coming Out 2020" that some of her songs were written about women.

"There were times I wrote songs about girls that my fans thought I wrote about guys. I'm surprised that some of them didn't figure out that some of the songs were for certain people," she said.

"I was sharing it with the world, yet I wasn't being completely obvious with what I was talking about. Music was my safe space," she continued.

Lovato recently made headlines for her split with her ex-fiancé, actor Max Ehrich.

Lovato and Ehrich started dating in March and got engaged in July. Lovato reportedly broke off the engagement and their split was announced on September 24, Insider's Claudia Willen reported.

Lovato reportedly broke off their engagement because she began to question his intentions and believed he might have been using their relationship for fame.

Representatives for Demi Lovato did not immediately respond to Insider's request for comment.