“Kris Kross will make ya, Trump Trump,” one person tweeted, referring to the ’90s hip-hip duo 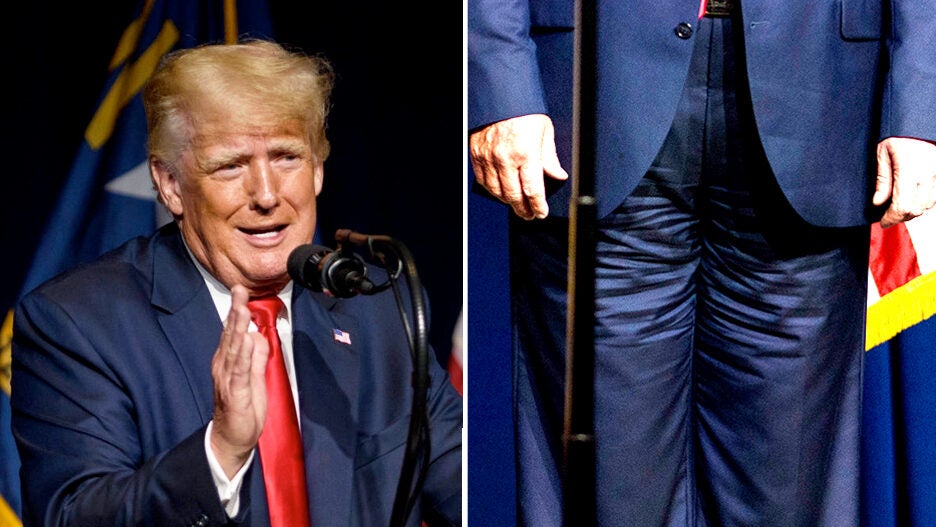 Donald Trump spoke in front of the Republican party in North Carolina on Saturday, rehashing his typical talking points and bashing President Joe Biden. But at the end of the night, his words weren’t what had social media buzzing — it was his wrinkly, ill-fitting pants that quickly drew comparisons to Kris Kross and others.

Posting a clip of Trump moving away from the podium, one person honed in on that fact that there appeared to be no zipper on the front of his pants. “Others are noting this, but it can’t be shared enough: Donald Trump gave his big speech today with his pants on backwards,” New York Daily News contributor Brandon Friedman wrote. “Look close and tell me I’m wrong.”

For reference, here is the moment.

Comprised of Chris “Mac Daddy” Kelly and Chris “Daddy Mac” Smith, Kris Kross were best known for their hit song “Jump” — notably their debut single — which topped the Billboard Hot 100 for eight weeks and was certified double platinum as a single.

But beyond their musical success, Kris Kross had an iconic fashion sense, always wearing their pants backwards (Chris Kelly maintained the look right up until he died at age 34).

Others simply focused on the absurdity of the situation, poking fun at the idea that Trump perhaps just didn’t notice the error. “Just like everybody else he puts his pants on, no legs at a time,” Keith Olbermann tweeted.

Now, it’s entirely possible that Trump’s choice in pants simply had an elastic waistband, or the lighting just made it seem like there was a lack of zipper. But folks on social media are going to have their fun in the meantime.

Others focused on the wrinkly appearance of the pants and recalled an account in former 2016 campaign aides Corey Lewandowski and David Bossie’s book that he made White House communications director Hope Hicks steam his pants while he wore them and once berated her for forgetting to bring the steaming machine during a campaign trip.