Three former employees have sued Walt Disney World, saying they were fired after refusing to wear face masks and get the COVID-19 vaccine due to religious reasons, according to a lawsuit.

Barbara Andreas, Stephen Cribb and Adam Pajer said in the lawsuit filed June 30 that Disney discriminated against them by not accommodating their requests to be exempt from the company's mandates requiring the vaccine and facial coverings.

Andres and Cribb were fired in March, while Pajer was let go in June, according to the lawsuit. The trio had worked for the company between seven and 20 years.

Disney's vaccine mandate was suspended in November after Gov. Ron DeSantis and Florida lawmakers limited the power for employers to require workers to be vaccinated. The company later dropped masking requirements for vaccinated employees.

The lawsuit claims that Disney's "augmented protocols" that were forced on nonvaccinated employees consisted of "harsh isolation and restrictions" that caused "serious breathing" and made it "nearly impossible to find a compliant manner and location in which to eat or drink while on shift." 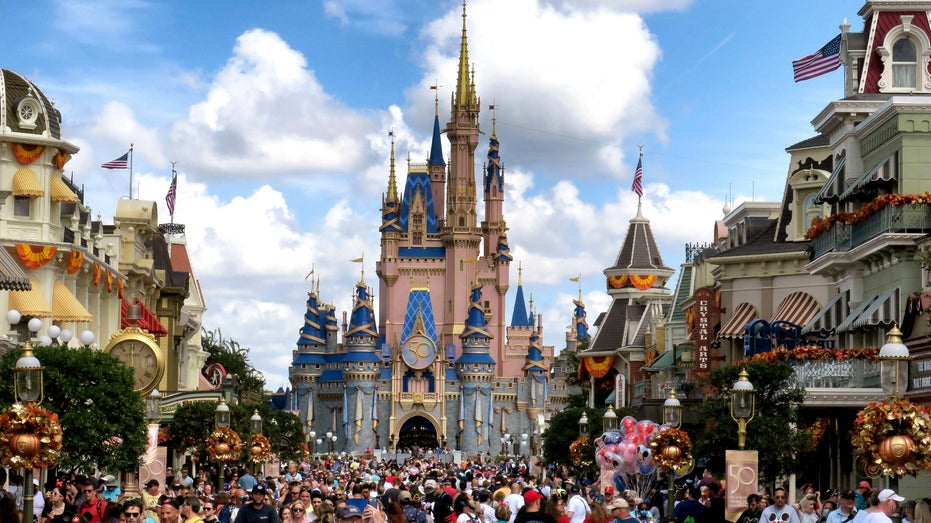 Disney is being sued by three employees for discrimination. (Joe Burbank/Orlando Sentinel via AP / Associated Press)

Adreas, who had worked for Disney for 17 years, had sought a religious exemption, claiming that wearing a facial covering is an "affront" of her Christian beliefs. The lawsuit also claimed that "participating in a medical experiment, such as covid testing or vaccines" also violated her beliefs because aborted fetal cells were used to manufacture it.

Disney responded to her request on Dec. 29, saying that "after careful review of the information you provided, we are unable to conclude that you are prevented from wearing a face cover due to a sincerely held religious belief, practice or observance."

The employees cited Biblical scriptures in requesting their accommodations, the lawsuit said.

The lawsuit claims that Disney "could and should have chosen to accommodate these religious beliefs in practice," and that the protocols made it clear the company "irrationally" feared the workers "as perpetually exposed or infectious with disease and a perpetual danger to other cast and guests."

Disney has not responded to a request for comment about the lawsuit.

The ex-employees are seeking an unspecified amount of money to compensate for lost wages, benefits and attorney’s fees, the lawsuit said.

Each of the fired workers reported the company to the Florida Attorney General, the Florida Commission on Human Relations and the U.S. Equal Employment Opportunity Commission, claiming discrimination and retaliation and for violating state laws prohibiting workplace vaccine mandates, the lawsuit said.

They are suing under as Florida statute on whistleblowing, claiming that reporting the company to authorities also led to their firings, the lawsuit said.