Drake has showed off his muscular physique and ripped abs in a clip which showed him pumping iron with his pals in the gym.

Grammy winner Drake has proved he stayed active while in quarantine, sporting a very ripped physiqiue. The Canadian hitmaker was seen in an Instagram Story on April 20, hitting the gym with his friends. The “God’s Plan” singer reposted the video from rapper Baka Not Nice, who’s signed to his label OVO Sound, and he could be heard saying in the clip, “Yo, yo, yo slow down dawg.” Drake flexed his tattooed arm while rocking grey sweatpants and purple sneakers.

A ripped physique isn’t the only thing Drake is coming into 2021 with — he was also recently spotted with a slightly longer quarantine beard. The “Nice For What” singer also sported a unique heart design buzzcut in his hair, in anticipation of his sixth studio album Lover Boy. The outing came a few days after a woman armed with a knife tried to get onto his expansive estate in Toronto, Canada.

Drake was home at the time she tried to enter the 50,000-square-foot property, a source told Page Six while a Toronto Police Department source told The Sun, “A female adult that was carrying a knife has been arrested. She did not gain any kind of entry into the property, and there were no injuries.” This wasn’t the first time Drake has dealt with an intruder. Back in 2017, a trespasser broke into his home in Southern California, where she drank his water and soda. Yikes! 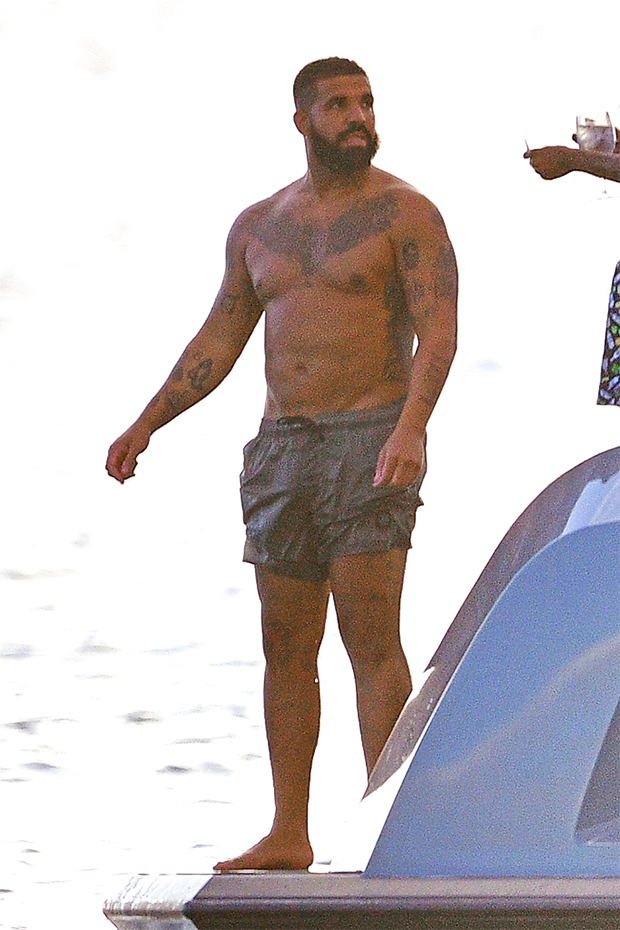 Nevertheless, Drake has been squarely focused on new music, and spending time with his mini-me son. He gave a shout out to his “lil man” Adonis Graham and his son’s mother, Sophie Brussaux on a new track. He mentioned both of them during “Lemon Pepper Freestyle,” one of the three songs on his new EP, which dropped in March 2021. “I sent her the child support, she sent me the heart emoji / They all say they love me, but they hardly know me / Yeah, dropped him off at school, big day for my lil’ man,” he rapped, per Genius. “Recess hits, daddy prolly made another M.”