Ellen DeGeneres told staffers WarnerMedia layoffs were pandemic-related, but an employee says brands stopped wanting to work with her 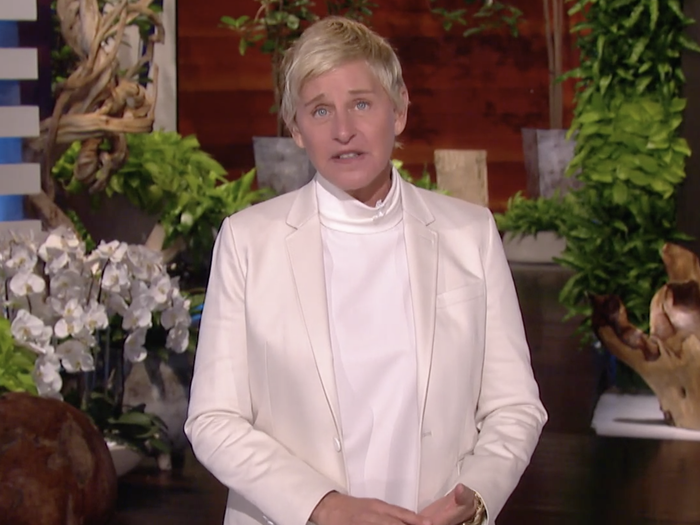 Ellen DeGeneres and her team told staffers that a recent round of terminations at WarnerMedia that affected more than two dozen of her staff was pandemic-related, but an employee says that may not be the full story, Buzzfeed News reported.

The employee (who wasn't named in the report), told the media outlet that brands were hesistant about working with the embattled host, and that this could have contributed to the layoffs at Ellen Digital Ventures — an extension of "The Ellen DeGeneres Show."

"Brands we were approaching were uneasy about being sponsors for this season because our organization is not a 'be kind' brand they thought it was," they said.

The employee, who works for Ellen Digital, said that they had seen a loss of advertisers and sponsors in recent months, and that some brands who had existing contracts were even trying to break them.

"It could be COVID-related, but it also felt like a lot of fallout from the stories over the summer," the employee said of the layoffs at Ellen Digital. "It's a combination and perfect storm of all of it and how one played into the next."

Per Buzzfeed News' report, at least 17 people on the Ellen Digital team were laid off earlier this week — and DeGeneres herself, along with executive producers from the show and an executive from the show's parent company, WarnerMedia, spoke to employees about the layoffs on Tuesday.

"I obviously am as heartbroken as everybody, but we have to know that this is all for the good of EDV, and we need to keep this going because we have such a great team and we believe in y'all, and we will get through this just like we've gotten through all kinds of other things," DeGeneres said on the call.

Executive producers Andy Lassner and Mary Connelly reportedly echoed DeGeneres' statements, telling employees that the layoffs were merely the result of the coronavirus pandemic, despite "a rough summer."

"Unfortunately, as you know from every company, digital and streaming has taken a big hit during COVID," Lassner said. "We are hoping to now turn the tide, and we feel that we're in a position with that with all of you here."

A representative for "The Ellen DeGeneres Show" told Insider on Wednesday that they had no comment.

The layoffs at Ellen Digital come after a turbulent year for the host.

In April, it was reported that DeGeneres' crew was "furious" about a lack of communication over their pay during the coronavirus shutdown.

Variety cited two anonymous sources who said that the long-running talk show's core stage crew — which consists of more than 30 employees — had not received any communication about the status of their working hours or pay, and that producers had not checked in about their mental and physical health.

And in July, the show's parent company, WarnerMedia, launched an internal investigation into the show's workplace culture. Variety reported an "employee relations group and a third party firm" would conduct the investigation, interviewing current and former employees about their time on set.

That same month, numerous ex-employees of "The Ellen DeGeneres Show" said they experienced sexual harassment and misconduct from executive producers while they worked there, according to a BuzzFeed News report.

DeGeneres subsequently addressed "issues" at her show with a letter to staff in late July.

In the letter, obtained by The Hollywood Reporter, DeGeneres took responsibility for the overall issues on her set. She did not directly address any allegations of her personal actions, but said she was "disappointed to learn" that people working for her did not feel happy or respected at work.

The host doubled down on her comments during the season premiere of "The Ellen Show" in September.

"I learned that things happened here that never should have happened. I take that very seriously," DeGeneres said in her opening monologue. "I want to say I am so sorry to the people who were affected."

"I know that I'm in a position of privilege and power. And I realized that with that comes responsibility," she continued. "And I take responsibility for what happens at my show. This is 'The Ellen DeGeneres Show.'"