Elon Musk, 49, had the support of girlfriend Grimes, 33, as he hosted SNL! The Vancouver born singer wasn’t just on-hand to watch, but she also appeared in a sketch! The duo teamed up for a hilarious skit inspired by Nintendo’s Mario video games that saw our favorite video game characters in court over Mario’s murder. The defense called up Elon’s Wario to the stand for a cross-examination, where he denied he was “evil” but just “misunderstood.” When asked if Mario had a dark side, Wario didn’t hold back — accusing Mario of “micro-dosing” on “mushrooms” (a frequent fixture in the Mario verse). He then revealed that Mario’s brother Luigi was sleeping with Mario’s wife: Princess Peach, played by Grimes! 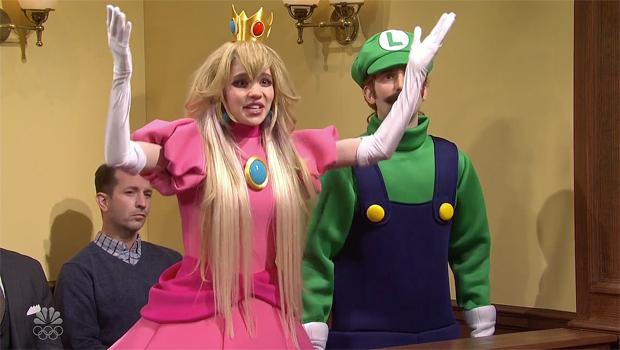 The 33-year-old looked just like the video game character wit her blonde wig, pink gown and yellow crown. “You a lie! We never a sleep together!” Luigi yelled in the courtroom, as Grimes’ Princess Peach backed him up. The cross examiner then revealed some questionable texts between the pair sent at 3:17 a.m. — one of which included a NSFW video. Luigi then prepared to throw a turtle at the stand — another classic Mario game move — as Pete Davidson‘s Andrew Cuomo interrupted the enter debacle. “Please don’t believe the horrible stereotypes you see in the Mario universe…we are just two misunderstood Italian Americans,” Pete’s Andrew said. 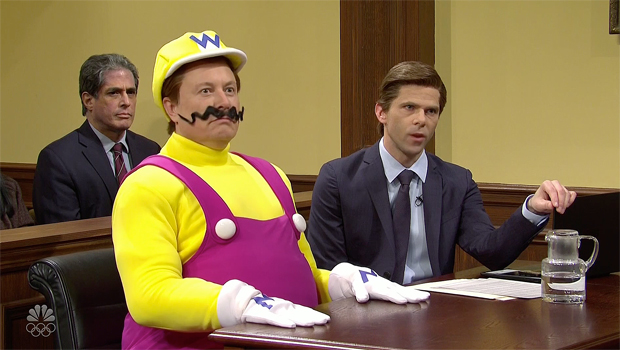 Grimes — who was born Claire Elise Boucher — revealed she was making a cameo earlier in the day! “Wow my auto dictation was on while I was talking to friend trying to write this post, so this is what my phone thinks I said ‘SNL but I think the toilet and Ethereum are not jumping to buy its not a long-term thing like it might be a couple like a year or something before they get bigger butt I would do it I don’t know which one yeah I think a pretty good bet’,” she began. “Tune into SNL tonight to watch me try acting!” she then revealed.

The 33-year-old stood in a mirror room in the photos posted to her Instagram account on May 8, 2021 as she looked at her own reflection. Grimes, who shares son X Æ A-12, 1, with Elon, showed off her unique style in a floral and polka dot dress. She also sported a baby blue baseball cap with her lavender colored hair making an appearance underneath. The Canadian star originally met her tech CEO partner on Twitter. After several flirtatious exchanges, they began a real-life romance — taking things public at the the 2018 Met Gala, where they walked the red carpet together. By Jan. 2020, Grimes teased she was pregnant on social media — giving birth to their baby on May 4 the same year.

The name wasn’t without controversy, which Grimes later tried to explain via Twitter. “X, the unknown variable,” she tweeted. “Æ my elven spelling of Ai (love &/or Artificial Intelligence), A-12 = precursor to SR-17 (or favorite aircraft). No weapons, no defenses, just speed. Great in battle, but non-violent,” she explained. Elon later confirmed that they pronounced part of the name “Ash” in an interview with Joe Rogan. “It’s just X, like the letter X. Then A I, like how you said the letter A, then I….And then Æ is, like, pronounced ‘ash’,” he said.