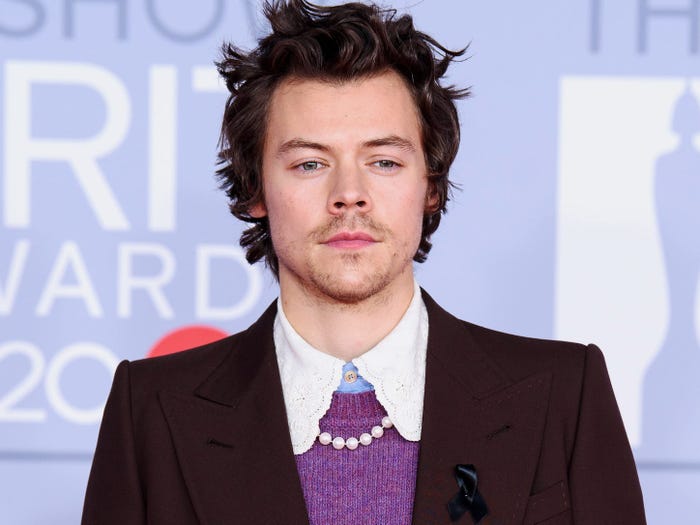 Harry Styles and his friends seemingly mocked Republicans in a series of comments on Instagram, as Styles and conservative pundit Candace Owens continued their high-profile feud.

Styles' collaborator and producer Kid Harpoon (real name: Thomas Hull) made an Instagram post on Thursday with the caption "bring back manly men," and included a banana emoji.

The songwriter appeared to be referencing a recent Instagram post by Styles, which showed the singer dressed in a powder-blue suit and eating a banana.

Styles captioned the image, taken from a recent Variety profile, "Bring back manly men" — a direct response to Owens, who criticized the singer in November for wearing a dress on the cover of Vogue.

In the comments section of Hull's post, Styles continued poking fun at conservatives by commenting "Fake news" and "Stop the count" — phrases that have been recently popularized by President Donald Trump and his supporters.

Hull also got in on the action, replying to Styles that he was "ROBBED of the cover," and joining the "Watermelon Sugar" singer in mocking conservative calls for a "recount" of the 2020 presidential election.

Styles' manager Jeffrey Azoff chimed in as well, jokingly commenting "recount" and "our observers weren't allowed in the room" on Hull's post.

The singer's cheeky comments come as he and Owens have continued their high-profile feud, which started in November when Owens called Styles' recent Vogue cover an "outright attack" on "manly men."

"There is no society that can survive without strong men," Owens said on Twitter at the time.

She added: "The East knows this. In the west, the steady feminization of our men at the same time that Marxism is being taught to our children is not a coincidence. It is an outright attack. Bring back manly men."

On Wednesday, however, Styles clapped back at Owens with the Instagram post of him eating a banana. The pundit subsequently doubled down on her original comments.

"When people try to tell me I don't have influence, and then @Harry_Styles dedicates an entire post to my tweet. I inspire global conversation. #BringBackManlyMen Shots fired," Owens tweeted, adding a screenshot of Styles' Instagram post.