Home » Celebrities » How Real Is ‘Borat 2,’ Really? Let’s Break Down The Scenes That Happened IRL

How Real Is ‘Borat 2,’ Really? Let’s Break Down The Scenes That Happened IRL

The world has changed a lot since the first Borat movie came out in 2006. But one thing remains the same: The infamous character uncovers plenty of problematic parts of American culture. The sequel to Borat is out now, and it skewers a variety of topics, from the U.S. government’s handling of the coronavirus pandemic to plastic surgery to debutante balls. The movie gives audiences a whole lot of cringe-worthy scenes of Borat interacting with real people, but how real is Borat 2, really? It turns out, a lot of the wildest scenes really did happen as they appear in the movie.

Borat 2, or as it’s officially known, Borat Subsequent Moviefilm: Delivery of Prodigious Bribe to American Regime for Make Benefit Once Glorious Nation of Kazakhstan, stars Sacha Baron Cohen as the titular Borat. In the sequel, Borat is sent to the United States once again, this time to deliver a gift from his home country of Kazakhstan to Vice President Mike Pence. He’s joined by his daughter Tutar (played by Maria Bakalova), and together, the actors prank unsuspecting Americans into revealing some of the most racist, sexist, and generally unsavory aspects of the country.

In the scenes shown in the movie, Borat and Tutar interact with unsuspecting people, including former New York Mayor Rudy Giuliani, leading to some truly astounding results. Here’s everything you need to know about which parts of those scenes are real, and which parts were scripted: 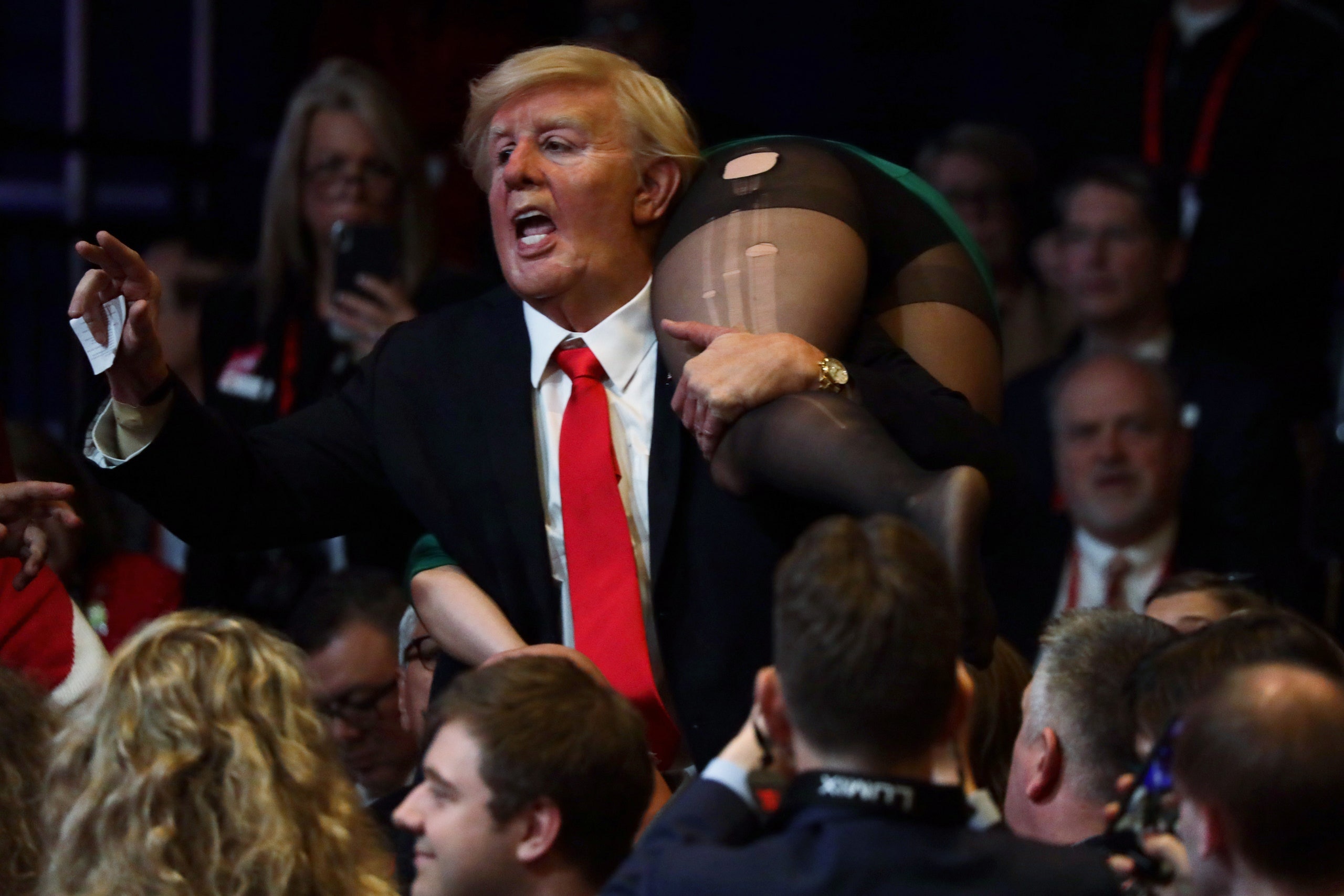 Early in the movie, Borat dresses as Donald Trump to try to bring Tutar directly to Pence at the Conservative Political Action Conference. When the CPAC took place in February, the fact that a "Trump impersonator" interrupted the event was reported, but no one knew that it was Baron Cohen, let alone that he was filming another Borat movie.

According to Baron Cohen, a lot of work went in to getting him in his costume. “I spent five hours in makeup that morning with the prosthetic team changing my face into Trump’s face,” Baron Cohen told the New York Times. “Then I ended up hiding in the bathroom, listening to conservative men go to the toilet for five hours until I broke into the room. We were surrounded by Secret Service and police and internal security.”

Production for the movie was underway when the coronavirus pandemic began, so the character of Borat had to figure out his quarantine situation just the like the rest of the world. He ends up locking down with two QAnon conspiracy theorists. Baron Cohen actually lived with them for five whole days, keeping up his Borat character the entire time he was there.

He told the NY Times, "The hardest thing I had to do was, I lived in character for five days in this lockdown house. I was waking up, having breakfast, lunch, dinner, going to sleep as Borat when I lived in a house with these two conspiracy theorists. You can’t have a moment out of character.”

March For Our Rights Rally

While he was staying with the conspiracy theorists, Baron Cohen attended a right-wing rally in character and performed a racist song. According to the Seattle Times, the producers of Borat 2 helped to set up the stage for him to sing. Members of the crowd at the event both cheered and booed him during the performance.

In one of the most touching scenes of the movie, Borat meets a Holocaust survivor named Judith Dim Evans at a synagogue. He dresses in an over-the-top anti-Semitic costume and tells her the Holocaust never happened, but Evans embraces him kindly and helps him to understand that Jews aren’t evil and the Holocaust did, in fact, happen. Baron Cohen himself is Jewish and a leading voice against anti-Semitism, so he used this scene as another opportunity to expose and combat hatred.

The filming of this scene was one of the rare times Baron Cohen broke character while filming. He let Evans know he’s a Jewish comedian playing an ignorant character for a satirical film, so in her scenes, she at least has somewhat of an idea of what’s going on. Evans died earlier in 2020, but Borat 2 is dedicated to her, and the producers of the movie helped to set up a website in honor of her and her Holocaust education work.

Here’s *the* scene everyone’s talking about. At the end of the movie, Tutar poses as a journalist and interviews Guiliani — yes, the actual Guiliani. After the interview, they go into a hotel bedroom, where he tells her, "You can give me your phone number and your address" and touches the small of her back. Tutar then helps Guiliani remove his microphone, and then he lies down on the bed and sticks his hand in his pants for… and uncomfortably long time. Before viewers can find out what might happen next, Baron Cohen interrupts the scene in character, and Guiliani flees.

Guiliani defended himself on Twitter, calling the scene "a complete fabrication." He also wrote, "I was tucking in my shirt after taking off the recording equipment. At no time before, during, or after the interview was I ever inappropriate. If Sacha Baron Cohen implies otherwise he is a stone-cold liar.”

In response, Baron Cohen said on Good Morning America, "If the president’s lawyer found what he did there appropriate behavior, then heaven knows what he’s done with other female journalists in hotel rooms. I just urge everyone to watch the movie. It is what it is. He did what he did. And make your own mind up. It was pretty clear to us.”

Bakalova, who appeared on GMA with Baron Cohen, said, "I always felt safe with our team, with our crew, with Sacha in my corner … That’s why I’m lucky, because I had them."