Home » Celebrities » J.Lo Claps Back At A-Rod Split Headlines With Video: ‘Ain’t Worried About A Blog Or A B-tch’

J.Lo Claps Back At A-Rod Split Headlines With Video: ‘Ain’t Worried About A Blog Or A B-tch’

Jennifer Lopez shared her ‘Sunday brunch playlist’, which highlighted false reports that she broke up with Alex Rodriguez.

Jennifer Lopez, 51, is reacting to those split rumors about her and fiance Alex Rodriguez, 45, and she’s using a Saweetie song to do it! The singer took to Instagram on Mar. 14 to share a video full of random clips of herself, which she called her “Sunday brunch playlist,” and it included a clip of her on stage with headlines scattered across it. One of the headlines read, “Jennifer Lopez and Alex Rodriguez break up, call off two-year engagement” and another headline read, “A-ROD I’M NOT SINGLE…” and the specific lyrics to Saweeties’ “Pretty B*tch Freestyle” that played over the clip didn’t seem to be an accident.

“I ain’t worried ’bout a blog or a b*tch” the rapper could be heard saying as the headlines flashed across the video. The other headlines were unrelated to the split and featured stories about Jennifer allegedly having Botox, which she has denied. 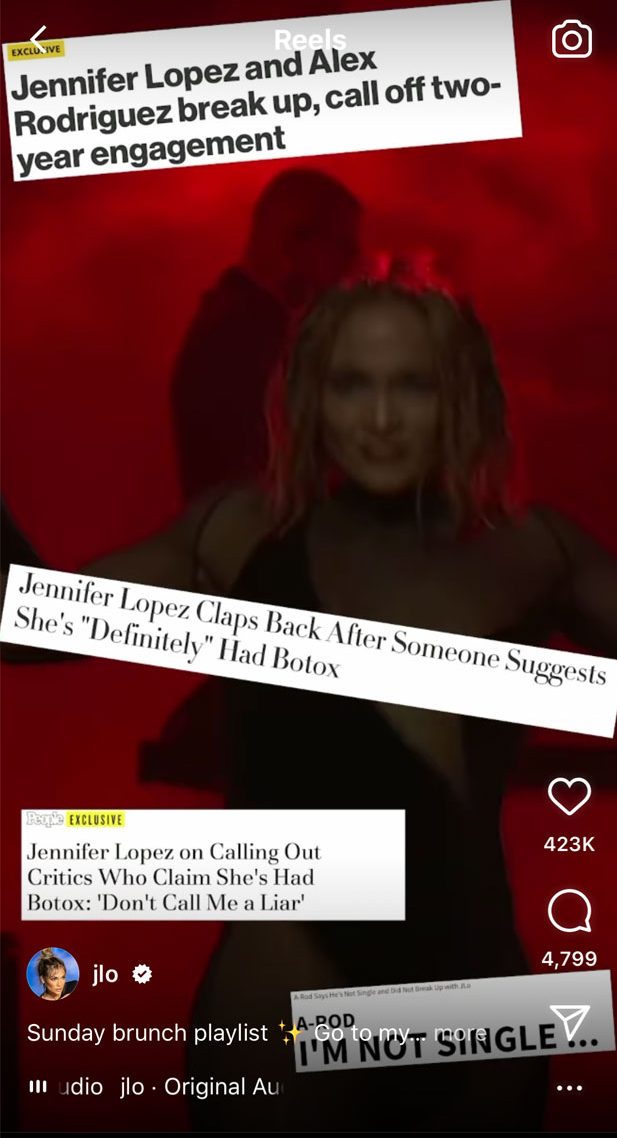 Jennifer’s indirect reaction to the split headlines comes one day after Alex was asked about the rumored breakup and revealed he wasn’t single. The admission happened when a reporter asked if he and J.Lo were “working on it,” and he gave a thumbs up to the camera. He then laughed and said, “no” when asked if he was “single.”

The lovebirds also released a statement before that and it revealed they were “working through some things” after numerous reports stated their engagement was off and they were going their separate ways. “They never officially broke up and talked about it but are still together,” a source told People on Mar. 13 as the news was confirmed that they are still on. “They hit a rough patch. But were not broken up.”

Although the initial breakup report, which was originally published by Page Six on Mar. 12, claimed that Jennifer and Alex’s relationship became rocky after allegations that he had been involved with Southern Charm‘s Madison LeCroy while still with Jennifer, the People source said that “had no bearing on the rough patch at all.” Madison also denied that anything romantic happened with the former New York Yankee during a reunion for her Bravo show in Feb.