Jennifer Garner gave her fans a laugh on Halloween when she shared a video of herself dressed in costume as her ‘favorite’ grandma emoji, which included a gray-haired wig and glasses, and aging body.

Jennifer Garner, 48, just put herself at the top of our favorite celebrity Halloween costumes list when she showed off her 2020 costume as the grandma emoji on Oct.31. The actress shared a hilarious video of herself rocking a gray-haired bun wig and glasses along with a blue and white plaid shirt and dark gray knee-length pants. She also had padding to make her body fuller in the chest and behind area and no-makeup.

Jennifer used the post to not only celebrate Halloween but to also promote a product called Rapid Wrinkle Repair from Neutrogena, the company she works with and is spokesperson for on a regular basis. “This Halloween I dressed up as my favorite emoji: 👵🏻👵🏻👵🏻👵🏻👵🏻♥️. Luckily for me, @neutrogena Rapid Wrinkle Repair retinol oil reduces fine lines in a week—deep wrinkles in 4! (Believe it or not, this is a simulation, not real life.) 😂♥️♥️♥️ The good news— Rapid Wrinkle Repair would still do the trick if it was! #happyhalloween,” she wrote in the caption for the video.

The clip goes on to show her pretending to get into bed after stretching as the grandma emoji. She goes on to put the wrinkle repair product on her face and when she wakes up, she looks a lot younger with brown hair and more like herself. She goes on to do it a few more times, while pretending to wake up again and again until she looks completely like her normal youthful self and smiles and then laughs at the camera. 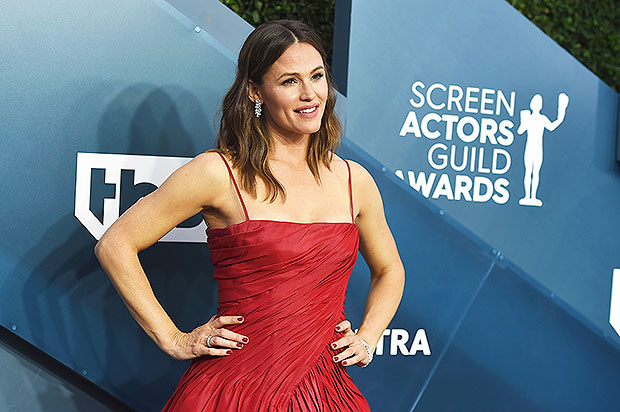 Jennifer’s latest Halloween costume is just one of many that she’s gotten attention for over the years. One of our other favorites is the maternity costume she showed off when she was pregnant with her second child, daughter Seraphina, in 2008. Her inspiration for the costume was from Peter Eastman’s “Big Dog…Little Dog” book series and she dressed up as the dog Fred while her daughter Violet, who was two-years-old at the time, dressed as the dog Ted from the children’s book “Fred and Ted’s Road Trip.”

Another cute Halloween costume that Jennifer and her ex-husband Ben Affleck‘s kids showed off was a group Peter Pan one that made our best celebrity kids’ Halloween costumes list here. The proud mother and her daughters and son were spotted walking while they were dressed in the classic story outfits and we can’t think of a cuter family outing than that!