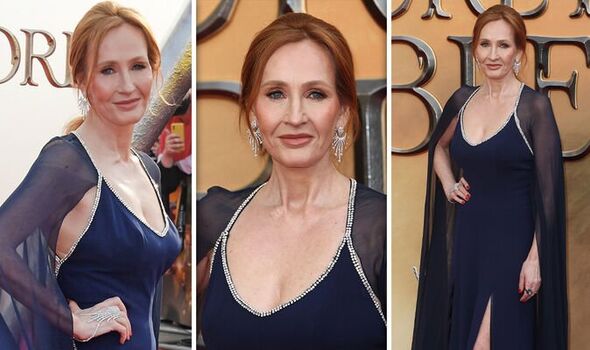 JK Rowling, 56, made sure she turned up for the latest film premiere for her book-turned-film Fantastic Beasts: The Secrets Of Dumbledore.

JK Rowling, 56, made sure she turned up for the latest film premiere for her book-turned-film Fantastic Beasts: The Secrets Of Dumbledore.

The star grabbed attention from onlookers in a silk low neckline navy dress.

The dress featured a rather high thigh slit as well as a jewelled neckline.

Attached to the dress’s jewelled straps was a sheer blue cape, adding elegance to the dress.

She wore her signature brown tresses in an updo and went for a subtle makeup look.

Rowling made headlines again recently as she responded to Russia’s Vladimir Putin after he made a bizarre comparison between them.

Putin said in a speech last week: “They [the West] cancelled JK Rowling, the children’s author – her books are published all over the world – all because she didn’t satisfy the demands of gender rights.

“They are trying to cancel out country – I’m talking the progressive discrimination of everything to do with Russia.”

JK, in response tweeted: “Critiques of the Western cancel culture are possibly not best made by those currently slaughtering civilians for the crime of resistance, or who jail and poison their critics.”

She added the hashtag: “#IStandWithUkraine.”

The author looked great in a dark blue gown

JK Rowling made sure to make her red carpet appearance memorable in a lovely blue low neckline dress.

JK Rowling showed off her assets during her rare red carpet appearance as the dress fetured a rather low bejewelled neckline.

The dress featured a high thigh slit on the right, showing off the author’s toned pins.

Rowling went for a subtle makeup look, featuring a dark lip, making sure not to draw attention away from her elegant dress.

Rowling partnered the dress with silver earrings and hand jewellery.

Rowling’s public apperance comes after she hit out at Putin last week after he compared their “cancelled” situations.

Maja Bloom made sure to leave little to the imagination

Maja Bloom left little to the imagination as she went completely sheer in a light blue floral gown.