Home » Celebrities » Joe Biden Picks A Dandelion For Wife Jill Before Flying Off On Marine One: Watch Sweet, Romantic Gesture

Joe Biden Picks A Dandelion For Wife Jill Before Flying Off On Marine One: Watch Sweet, Romantic Gesture

Joe Biden has proved he’s a true gentleman, surprising his wife of 43 years by picking her a flower while walking hand-in-hand across the lawn at The White House.

Jill Biden and Joe Biden may have been married for 43 years, but their romance is very much still alive! President Joe and Dr. Jill were seen walking hand-in-hand on April 29, when the POTUS surprised her with a sweet, romantic gesture. He bent down while strolling across the lawn at the White House to pick a dandelion from the grass. The couple then boarded Marine One, bound for Plains, Georgia, to meet with former president Jimmy Carter and former first lady Rosalynn Carter.

The First Lady stunned in a blue dress with a yellow and green floral pattern, a matching protective face mask, and a yellow heels. She held onto the flower as she boarded the plane with her husband. Twitter users were quick to comment on how sweet Joe’s action was. “I’m glad we elected a president that cares for his wife as well as the American people,” one person wrote, while another joked, “I’ve already seen her hold her husband’s hand more times than Trump’s entire presidency.”

It comes just a few months after Joe opened up in a 2020 interview with CBS Sunday Morning about his enduring relationship, “I adore her,” he began. “I’m gonna sound so stupid — I was saying the other day, when she comes down the steps and I look at her, my heart still skips a beat.” 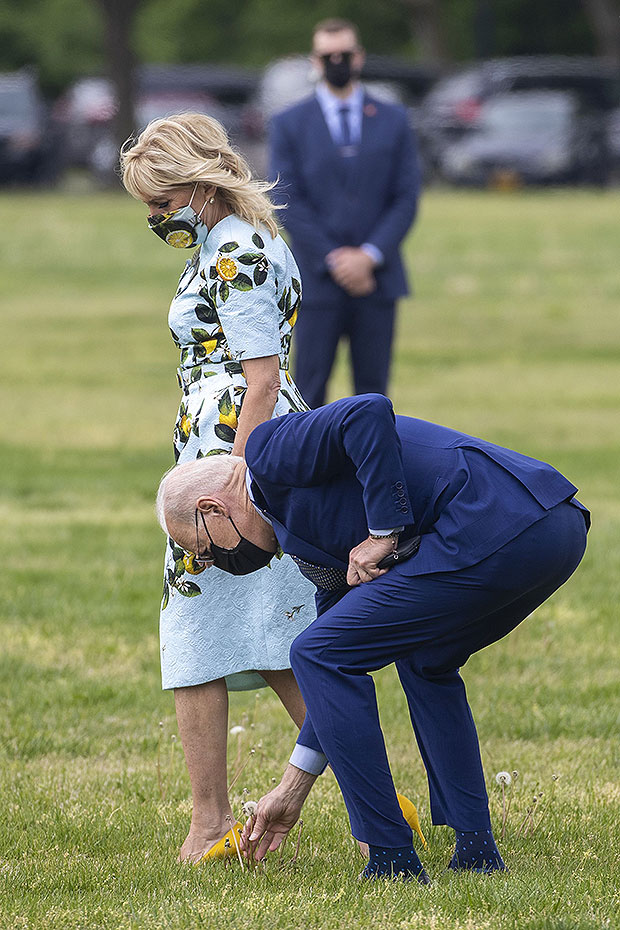 Most recently, Joe confirmed he personally called the family of George Floyd to discuss the murder conviction of his killer, former Minneapolis Police cop Derek Chauvin. After just 10 hours of deliberations, a jury found the ex-police officer guilty of second-degree unintentional murder, third-degree murder and second-degree manslaughter in Floyd’s May 25, 2020 death. Biden told his seven-year-old daughter Gianna that her father “did change the world,” as his death set off nationwide protests about police brutality and systematic racism.

“I just spoke with George Floyd’s family again. A remarkable family of extraordinary courage. Nothing can ever bring their brother, their father back. But this can be a giant step forward in the march towards justice in America,” he said in a statement, adding, “What I just discussed with the Floyd family, the guilty verdict, does not bring back, George. But, through the family’s pain they are finding purpose. So George’s legacy will not be just about his death, but about what we must do in his memory.”